TOKYO -- Tabasco, possibly the world's most famous hot sauce, celebrates its 150th anniversary this year, and the company behind the brand is hoping to tempt foodies in Japan to do the unthinkable: add it to their own cuisine.

While the thought of being served hot sauce on sashimi would have most people running for the exit, many of the ideas on the company's Instagram account, like adding it to Okinawan rafute braised pork belly or taco rice, might inspire more than a few diners.

Harold Osborn, executive vice president of McIlhenny, the company that makes the sauce, and a fifth-generation member of the founding family, said that sales are growing globally, particularly among young people.

Japan is now Tabasco's second-largest market after the U.S., but there is one thing that troubles Osborn. Whereas elsewhere in the world the sauce is an "all-purpose seasoning," for some reason, the Japanese use it almost exclusively for pasta and pizza.

In a bid to get people to be a little more daring, and to perhaps even try it with Japanese food, the company has launched a promotion campaign showing off its various uses on Instagram and other social media channels.

One of the main reasons behind Tabasco's increasing popularity among young people, Osborn said, is that the little red bottle looks good in people's Instagram dinner pictures. 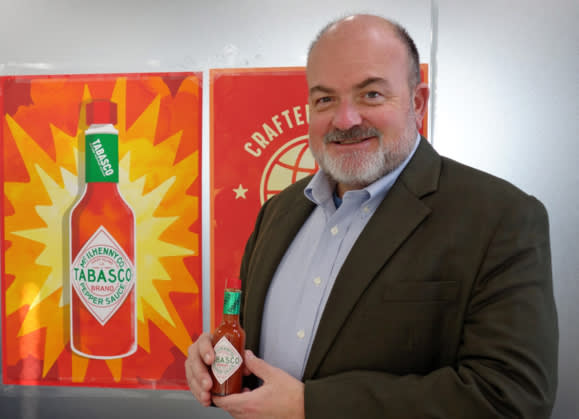 McIlhenny is also considering a Japan release for its Scorpion Sauce, a condiment the company claims is 20 times hotter than original Tabasco. While typical tabasco peppers fall between 2,500 and 5,000 on the Scoville scale, one scorpion pepper can contain roughly 2 million units, according to the company.

Currently, McIlhenny's "hottest sauce yet" is available only through mail order, or on Avery Island in the U.S. state of Louisiana, where the family-owned company has been making the brand since 1868.

The recipe, a combination of tabasco pepper, vinegar and rock salt, and production methods have remained unchanged for 150 years, and Osborn said McIlhenny can maintain its high standards precisely because it continues to manufacture the product at the original site. Many of the company's 250 or so employees come from families that have worked there for generations.

McIlhenny began exporting Tabasco in 1880, and it is said to have first arrived in Japan sometime after World War II. The brand surged in popularity during the 1970s, when professional wrestler Antonio Inoki signed a sales contract with McIlhenny.

If the sauce tastes as good with Japanese food as it looks on social media, the company could be in for another windfall.