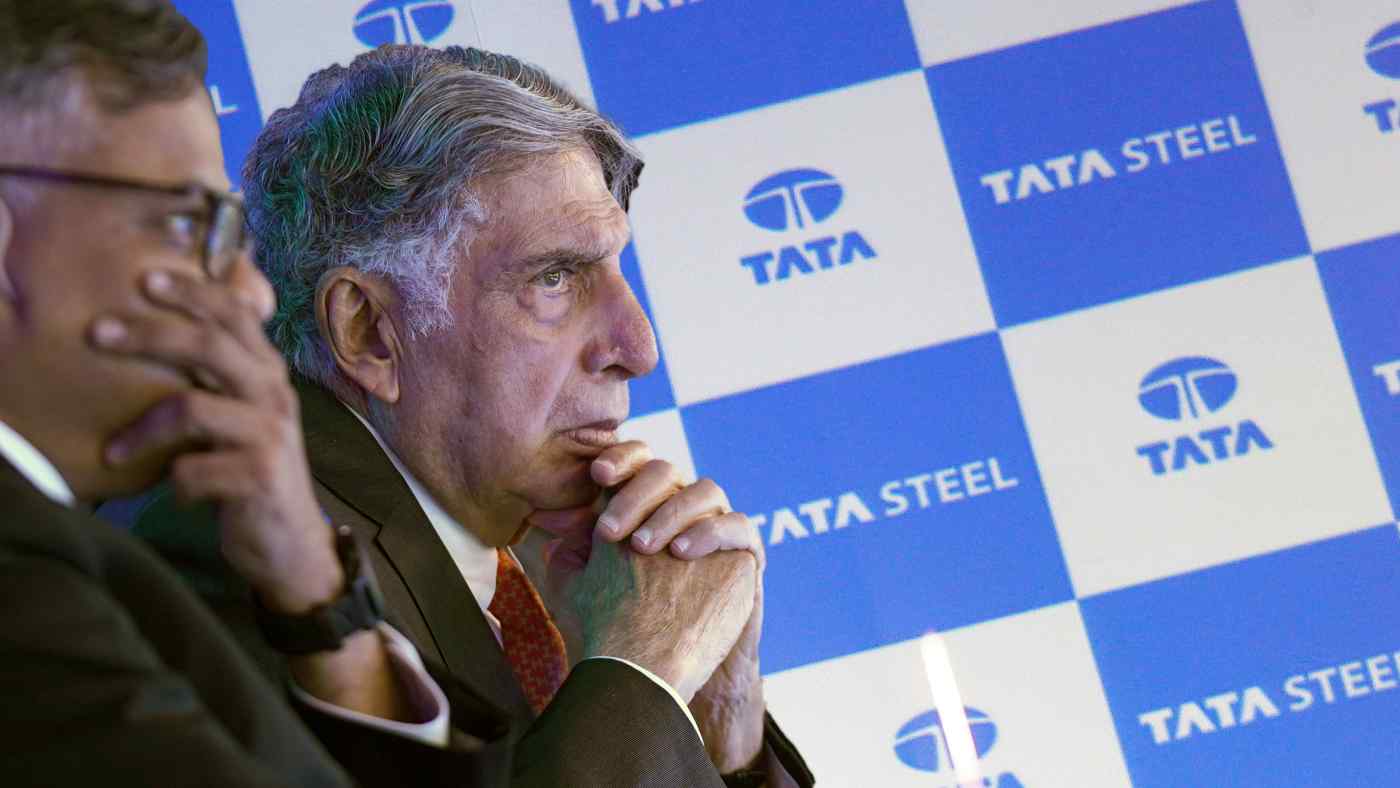 Ratan Tata, right, handed over Tata Group's chairmanship to Cyrus Mistry in 2012. His removal from the top post in 2016 led to the ongoing dispute between the two families. (Nikkei montage/source photos by Reuters)
ROSEMARY MARANDI, Contributing writerOctober 2, 2020 18:00 JST | India
CopyCopied

MUMBAI -- India's Tata Group is facing the painful prospect of a $24 billion share buyback to end a dispute with its longtime business partner, but market observers said it could also be a fresh opportunity for the conglomerate to form new strategic relationships.

Shapoorji Pallonji is the family-run business of ousted former Tata Group Chairman Cyrus Mistry, who was removed from the board in October 2016, triggering a lawsuit that resulted in his reinstatement by a tribunal in December. Tata has since been fighting that court order.

Shapoorji Pallonji made a proposal last week for a "separation" from the Tata Group before the Indian Supreme Court, "due to the potential impact this continuing litigation could have on livelihoods and the economy."

Tata Sons had earlier approached the court to restrain Shapoori Pallonji from pledging Tata Sons shares to raise funds for its own businesses. Tata Sons argued that it has the right of first refusal in cases where its shares are to be pledged or sold to another party.

Shapoorji Pallonji hit back with a statement last week that referred to "the past oppressive actions and the latest vindictive move by Tata Sons" which it said made the relationship "infeasible."

Tata has not yet reacted to the statement.

The Mistrys valued Tata Sons at 7.9 trillion rupees. Tata group faces that huge bill if it wants to buy back Tata Sons shares, at a time when many Tata companies are struggling due to the new coronavirus pandemic which has killed more than 98,000 people in the South Asian country.

One of Tata's options, analysts have pointed out, is to sell 16% of TCS shares to monetize the stake for the share buyback of Tata Sons. This will bring its shareholding in TCS to 56%, Mumbai-based Institutional Investment Advisory Services estimated in a note released on Sept. 23. Tata Consultancy will still be a subsidiary in that scenario but the group will receive less cash return in the long run from the IT company. "Tata Sons' ability to infuse equity and provide liquidity support to its businesses has been driven by TCS' dividends and [share] buyback," the advisory firm said. "The sale of 16% of TCS will restrict Tata Sons' financial flexibility and somewhat weaken its ability to hold the group together."

Another option is to borrow against the shares of listed group companies, but this has the undesirable effect of bloating overall debt and weakening the conglomerate's financial position.

Tata faces some tough decisions but some analysts see the break with Shapoorji Pallonji as a good opportunity for the salt-to-software conglomerate to explore new strategic partnerships with other companies that see opportunities in tapping a population of 1.3 billion.

Deven Choksey, managing director of KR Choksey Investment Managers, said Tata can now find more compatible partners. "SP Group did not provide that strategic partnership," he said. "A strategic investor will be in a much better position to handle the subject."

Indeed, foreign companies have been keen to position themselves for a slice of the Indian market. Since March, another conglomerate, Reliance Industries, led by India's richest man Mukesh Ambani, has received as much as $20 billion in investments from companies including Google, Facebook and Intel to strengthen its digital and retail businesses.