TOKYO -- Tata Group, India's biggest conglomerate by revenue, is stuck in the doldrums. Its flagship car and steel businesses, which made Tata famous around the world thanks to high-profile overseas acquisitions, have become a drag on the group over the past two years.

Of the group's main operations, the only one that is growing steadily is Tata Consultancy Service's IT business. Overall, net profit from the three key businesses has fallen by more than half in the two years through March 2020 to 216.6 billion rupees ($3 billion).

For the April to June quarter, they racked up a combined net loss of 58.4 billion rupees, a reversal from a 51.5 billion-rupee net profit for the same period a year ago. The novel coronavirus, which is still spreading rapidly in India, is expected to continue weighing on the group's performance through the current fiscal year.

The total market capitalization of Tata Motors, Tata Steel and TCS has fallen to about 70% that of rival conglomerate Reliance Industries, which is controlled by Mukesh Ambani, India's richest man. The gap reflects the rise in Reliance's market valuation, which has been helped by rapid growth in the group's telecoms and retail businesses in recent years.

Reliance's telecom and digital business unit succeeded in scooping up around $20 billion in investment from companies such as Facebook, Intel and Google in just the three months through July, which should allow it to push further into the digital arena.

This year could prove a watershed, highlighting the diverging fortunes of India's two largest industrial powerhouses, Tata and Reliance. On Aug. 17, Tata Motors denied reports that it plans to sell its stake in U.K.-based Jaguar Land Rover, rejecting what it called "unconfirmed and unsubstantiated reports ... published by some media." JLR remains a critical part of the group, it said.

Rumors that Tata Motors will unload JLR often circulate due to the British automaker's weak earnings. Tata Motors logged a net loss of over 100 billion rupees for the second consecutive fiscal year through March, most of which came from JLR, which the Indian carmaker bought in 2008 under the leadership of then group Chairman Ratan Tata.

JLR's poor showing is attributed to plunging sales in China, a key market. "Apart from the COVID-19 impact, there were a few other factors that affected JLR's sales in China. Interior quality, the sophistication of the engine and the automatic transmission were below expectations," said an analyst. 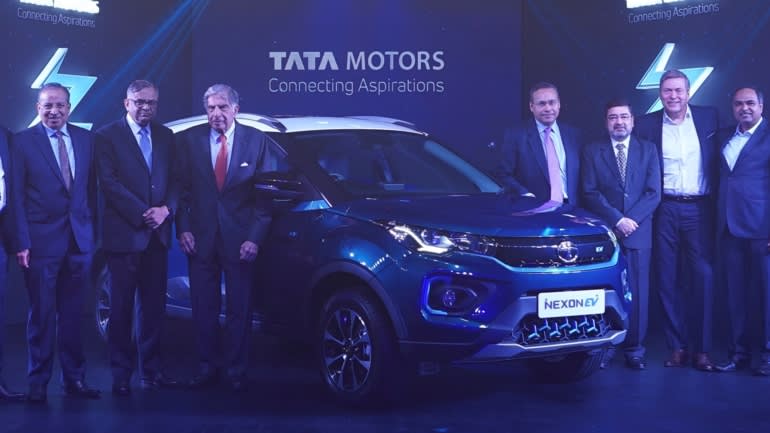 Tata Group Honorary Chairman Ratan Tata, third from left, who led the acquisition of JLR, stands next to incumbent Chairman N. Chandrasekaran at a Tata Motors' event. (Photo courtesy of the company)

The more than 150-year-old Tata Group chalked up 7.92 trillion rupees ($108 billion) in group sales in the fiscal year through March 2019. It has more than 100 companies operating under its umbrella in businesses ranging from electricity generation to food processing to chemicals, in addition to the three key businesses that contribute nearly 80% of total group revenue.

Other than TCS, most other Tata companies are conventional manufacturers. The group is increasingly reliant on TCS for its sales and profit. while the rest of its businesses have struggled.

In contrast, Reliance has been expanding aggressively into digital technology and retailing, while its core business, oil and petrochemicals, maintains steady growth. In addition to raising huge sums of money for the digital unit, Reliance announced on Saturday that it will buy the retail and logistics businesses of local rival Future Group for 247.1 billion rupees, strengthening its position in the industry.

This is a reversal of fortune. Tata beat Reliance into the telecom business, having entered the market in the late 1990s. In 2009, it brought in Japan's top mobile services operator, NTT Docomo, as a business partner. But the joint venture failed to gain market share as expected. 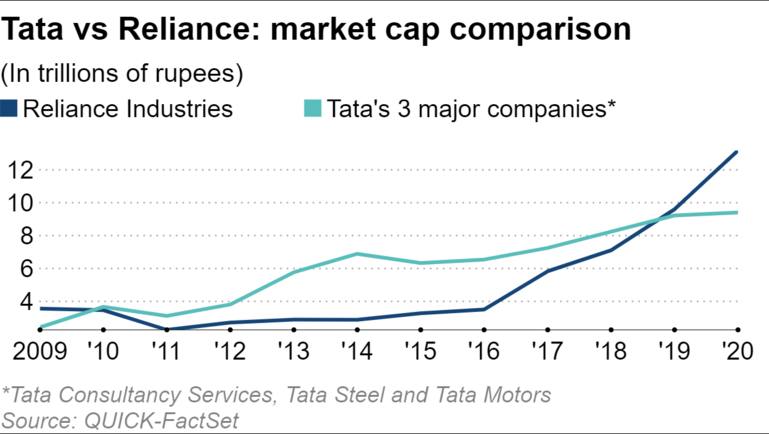 NTT Docomo decided in 2014 to pull out of India, which ensnared it a breach-of-contract dispute. As Tata was trying to resolve the controversy, Reliance broke into the sector with the Jio brand and, helped by its competitive pricing strategy, grabbed the top market share in just a few years.

As it was relegated to bit-player status, Tata was forced to sell its consumer telecom business to another major operator, Bharti Airtel, in 2019. It abandoned the business entirely and Reliance emerged the clear winner.

"Tata has not been a very agile organization historically," said one analyst who asked not to be named, when it comes to the digital business. "Mostly it can be attributed to its aged and conventional leadership," which the analyst described as "bureaucratic."

Tata is now weighing whether to bid for Air India, the country's loss-making flag carrier. The conglomerate has long been a fan of aviation, with two airlines -- AirAsia India and Vistara -- already under its wing.

The deadline for filing bids has been postponed to the end of October from the end of August due to the pandemic, giving Tata more time to weigh its options. It needs to decide whether swallowing Air India will help it expand its airline business profitably.

But the coronavirus pandemic has cast a shadow over the industry and questions have been already raised about the wisdom of Tata acquiring the airline. Local media have said that it would be unreasonable for Tata to buy Air India, given that it operates at a loss. "For a portfolio that is bleeding cash, prima-facie, an acquisition of Air India does not make sense," said one analyst. "[I]t adds debt to the balance sheet [of the Tata Group], complexity to the operations and continued cash losses."