TAIPEI -- Chairman Terry Gou said Foxconn Technology Group will be able to replace 30% of its workers on the production lines with robots in five years' time.

Gou said he wants to cut the number of staff in the repetitive, monotonous work of putting together mobile gadgets including Apple's iPhones, and he plans to shift that 30% of workers to sales and software design positions. 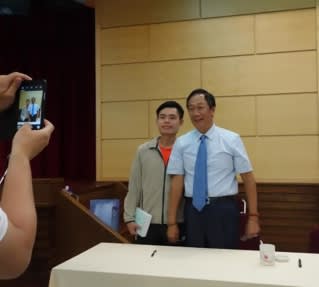 Foxconn Technology Group Chairman Terry Gou and a shareholder posed for a photo after the annual shareholders' meeting on June 25.

"I am not replacing jobs with robots," Gou said during the annual shareholders meeting on June 25. "I am having workers do work that require thinking."

Gou's statement came as the tech giant has been developing robotics technology for automated production, an area the executive has identified to be the company's core businesses in the future.

His comments were also a response to continuing criticism by labor rights groups that working conditions for the one million workers at the company's facilities in China remain harsh, and that a lack of health and safety precautions have allegedly led to some contracting leukemia because of exposure to toxic chemicals. Gou said on Wednesday that only three workers had leukemia and the company had spent a million yuan treating them.

Concerns about conditions at Foxconn's factories first came to light in 2010 when a string of suicides occurred on its Shenzhen campus in southeastern China. Labor rights groups attributed the suicides to subpar conditions within the facilities, including military style management, low wages and long overtime.

Since then, Foxconn has introduced significant measures to improve the welfare of its Chinese factory workers. It had set up 24-hour hotlines and care centers with doctors and psychiatrists on its Chinese campuses to offer medical and consultation services, and the company had hiked its minimum wage level to at least 50% above legal requirements.

Still, about three dozen labor activists rallied at Foxconn's headquarters in the gritty Tucheng district in suburban Taipei shortly before the shareholders' meeting began. They were joined by company staff who voiced support for their employer.

During the shareholders' meeting, Gou became agitated when a British fund manager brought up labor conditions. Labor rights activists rallied in front of Foxconn headquarters in suburban Taipei to protest against work conditions at the company's Chinese facilities.

Investors may have little choice but to buy into the tech behemoth, given the company that Foxconn keeps. Half of Foxconn's annual revenues are derived from providing parts and assembling iPhones for Apple. It is a slice of a pie that many want. Pegatron is one of Foxconn's biggest competitors in Taiwan hankering after iPhone assembly orders, but Gou dismissed the company as merely a "backup" for Apple.

Gou repeated the claim that Foxconn's sales will grow 10% annually for the foreseeable future, but the company's revenues only rose 6.5% to 4.21 trillion New Taiwan dollars ($136 billion) last year from 2013.

Earning a net profit margin of just 3-4% for iPhones, Foxconn has been aggressively exploring other sectors, including robotics and telecommunications, for new sources of revenue outside of China and especially in India, where it Gou hopes to bring the company's suppliers. Earlier this year, Foxconn had also announced that it planned to set up 10-12 manufacturing facilities and data centers in India by 2020.

Gou also said that Foxconn may start making phones for Micromax, the leading smartphone supplier in India, hours after news leaked that SoftBank and Alibaba are close to buying a 25% stake in the Indian company. Gou and Alibaba founder Jack Ma are known to have a close relationship.