Tencent, Alibaba and the fight to control China's online ecosystem

Earnings beat estimates but competition intensifies over payment and cloud 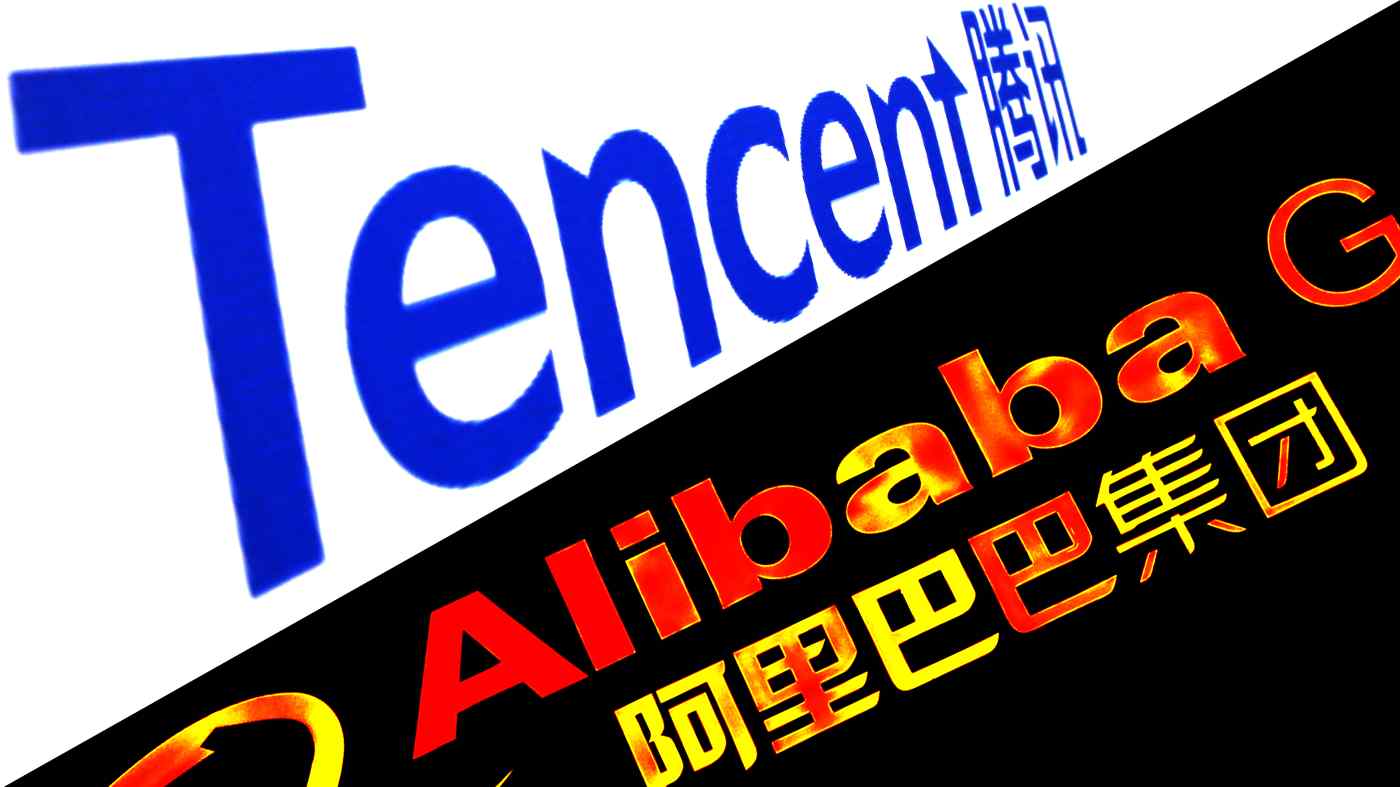 The fight between Tencent and Alibaba extends to mobile payments, cloud computing and other areas of the digital economy.
ALEX FANG and COCO LIU, Nikkei staff writersMay 16, 2019 06:10 JST | China
CopyCopied

New York-listed Alibaba said net income rose more than 250% on the year to reach 23.4 billion yuan ($3.4 billion) during the January-March quarter, far surpassing the projected 16.9 billion yuan based on analysts polled by Refinitiv.

Hong Kong-listed Tencent's net profit, meanwhile, increased 17% to 27.2 billion yuan, boosted by an increase in value of the company's investments.

But while the two companies have been growing in their respective areas -- Alibaba thriving in e-commerce and Tencent commanding video gaming and messaging service with its application, WeChat -- future growth looks increasingly set to overlap.

In the earnings conference on May 15, Tencent disclosed for the first time revenue from a new segment that covers financial technology and business services, which recorded a 44% surge to 21.8 billion yuan, accounting for a quarter of total revenue.

The breakout of the new revenue stream marks a "new milestone for the evolution of our business," Tencent President Martin Lau said.

Alibaba dominates both mobile payment and cloud infrastructure services in China, with Tencent trailing second, according to third-party estimates.

Alibaba, which made its debut in cloud computing 10 years ago, said on May 15 that revenue from its cloud services jumped 76% thanks largely to an increase in average spending per customer.

Alibaba has become an indisputable leader in this booming market. In Asia-Pacific, primarily China, Alibaba's cloud business last year surpassed the market share of Amazon and Microsoft combined in terms of infrastructure as a service and infrastructure utility services, the two most popular forms of cloud services, according to Gartner Research.

The ventures into cloud are symbolic of the path that the two companies look to be heading down.

Martin Bao, an analyst with ICBC International in Hong Kong, said Alibaba has bet on benefiting from owning a whole ecosystem: a merchant that sells on Alibaba's e-commerce platform is likely to also use its cloud service and purchase its financial products. A more troublesome possibility, however, is that the aggressive diversification which dragged down the company's profitability may not be able to yield a return as high as expected.

"No one has tested such a business model before. That is the challenge," Bao said.

Tencent has similar ambitions. Last October, the company announced a "strategic organizational upgrade" to better serve not only consumers but also industries ranging from retail and hospitality to finance, as the company steps into what it called the "Industrial Internet era." Pony Ma Huateng, chairman and CEO of the group, said the company aims to enable "different industries to better connect with consumers via an expanding, open and connected ecosystem."

In the earnings call on May 15, Lau also touted access to Tencent's vast base of users as a differentiating factor for its cloud business. Tencent's foray into fintech and business services comes as revenue from its core business continues to slow.   © Reuters

Over the years, Tencent has also invested heavily in financial technology, acting as an incubator for new businesses -- such as its own online lending platform, WeBank -- and injecting capital into other companies, including Chinese security-trading platform Futu Holding as well as fintech startups in Latin America. Tencent is the second largest shareholder of Chinese investment bank CICC, followed by Alibaba.

For Tencent, the foray into fintech and business services comes as revenue from its core business continues to slow in part due to China's macro and regulatory challenges.

Last year, Tencent's gaming division took a hard blow from China's regulatory freeze on applications to monetize titles, leading to a profit slip in the second quarter of 2018, the first in more than a decade. In early May, the company dropped its hugely popular title Player Unknown Battlegrounds, which was unable to obtain a license to generate any revenue. At the same time, Tencent released a new Beijing-approved, anti-terrorism-themed game, Game for Peace, hoping to revive the struggling gaming unit.

Tencent's advertising slowdown continues due to macro environment. James Mitchell, the company's chief strategy officer, said in the earning call on May 15 that the effects of the U.S.-China trade war and a slowing economy were most evident in advertising from sectors such as automobile, real estate and internet services.

For, the Hangzhou-based Alibaba, much of its growth still comes from e-commerce, which has been its core business from day one.

The company said it is on track to sell $1 trillion of goods on its platforms by 2020, a goal the company set five years ago. "Looking ahead to fiscal 2020, we expect revenue to be over 500 billion yuan, reflecting our confidence and positive momentum going forward," said Maggie Wu, chief financial officer of Alibaba Group.

The company's profit margins have declined over the past few quarters and analysts say a further decrease is anticipated as Alibaba has ramped up efforts to expand its presence from major cities into less-developed areas.

The company has pledged to extend the operation of its food delivery unit, Ele.me, into smaller cities. There is also a plan to open up more Hema stores, Alibaba's experiment of digitizing traditional brick-and-mortar stores, in those locations. The company said nearly 80% of its newly added customers last quarter came from smaller cities and it had no intention to slow down its desire for tapping into those markets.

While saying that the company will be "disciplined" about its investment, Wu told analysts on May 15 that "we are prepared to fight for competition and market shares."

Tencent-backed Meituan Dianping, a local service platform and top rival of Alibaba in food delivery, recently vowed to venture into smaller cities. Alibaba also faces fierce competition with e-commerce operator Pinduoduo, a Chinese group selling-style platform which has grown into a Nasdaq-listed company within three years by selling to residents of Chinese villages as well as lower-tier cities.

Danny Law, an analyst with Chinese brokerage company Guotai Junan International in Hong Kong, told the Nikkei Asian Review before the earnings release that Alibaba had bet on new initiatives such as cloud computing to drive future growth. 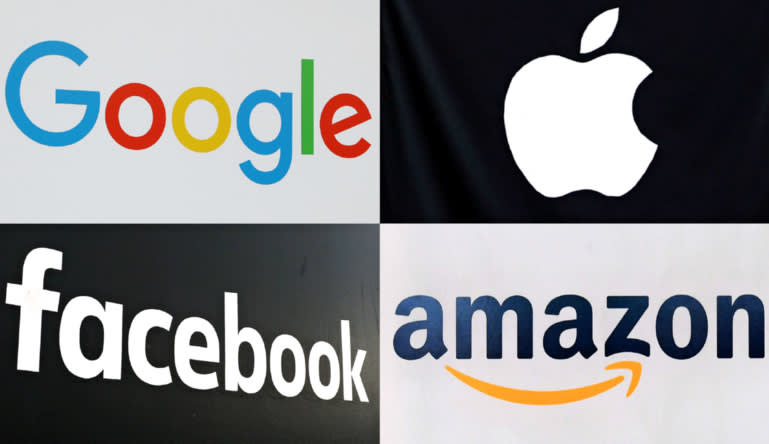 The market capitalization of Google, Apple and Amazon each exceed $800 billion, twice the scale of Tencent and Alibaba.    © Reuters

"These side businesses will help the company to reach more users and enhance their loyalty, benefiting to its core commerce business eventually," he said.

However, since cloud computing and many other new businesses remain loss-making, "the revenue contribution for these side businesses will grow at a faster pace, but it may not be significant to the bottom line, or may have a negative impact on the bottom line," Law said.

While Alibaba and Tencent battle to control the China market, the two pale in comparison to the "Big Four" American giants Google, Amazon, Facebook and Apple.

The market capitalization of each of the two Chinese tech heavyweights hover in the $400 billion range, while Google, Amazon and Apple each surpass $800 billion.

The biggest difference may be in their overseas penetration.

The U.S. quartet generate over half their revenues offshore, while the ratios at Tencent and Alibaba wallow in single digits.