Stocks up 30% but few new entities made list dominated by China, Japan again 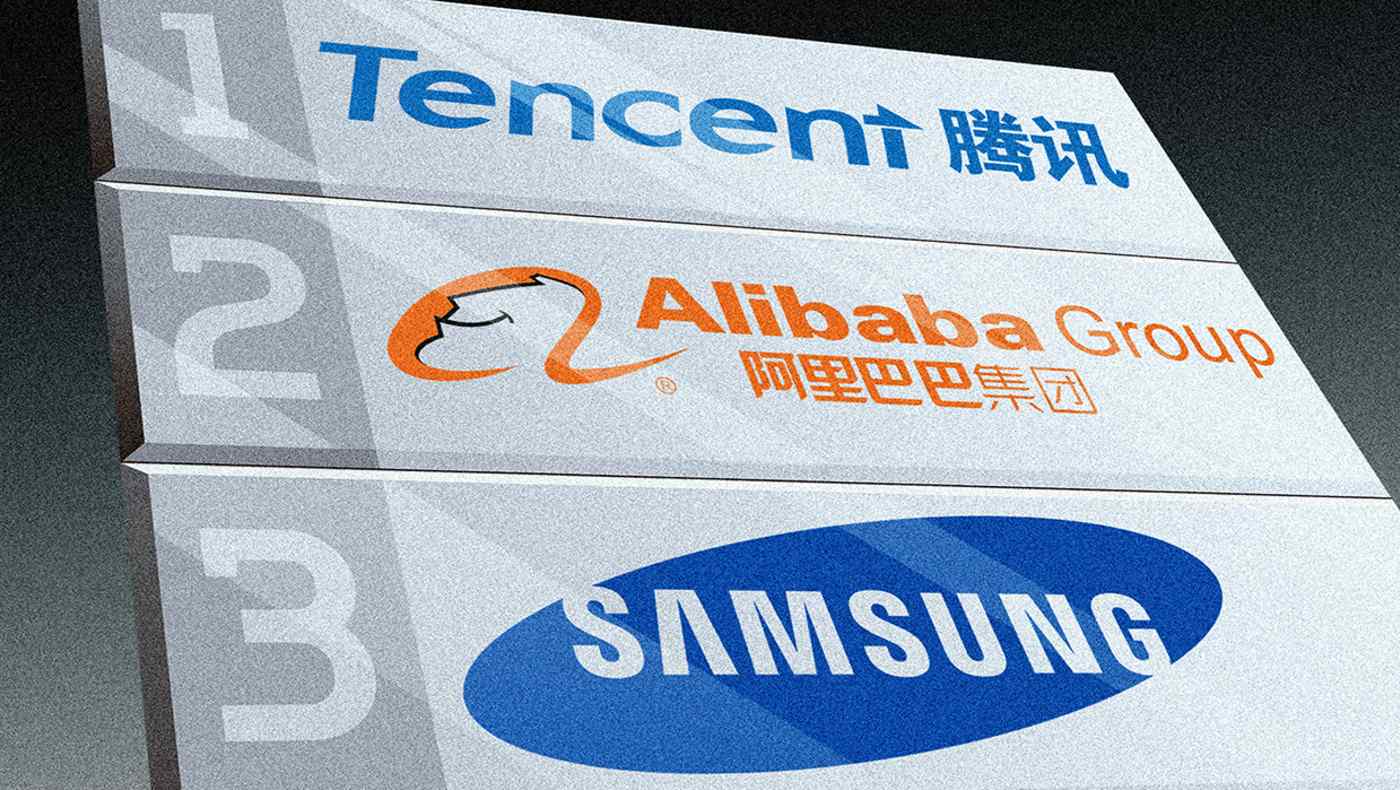 SHANGHAI -- At the end of 2017, the most valuable companies in Asia were, unsurprisingly, Tencent Holdings and Alibaba Group Holding. Reflecting growth in China's internet economy, both companies' market value more than doubled, and were substantially higher than the average of almost 30%. But a closer look at the list of Asia's most valuable companies showed that the same Chinese and Japanese enterprises continued to dominate and there was little by way of new blood from those two countries and elsewhere.

The 50 most valuable Asian stocks in dollar terms by the close of trade on Dec. 29 included 13 telecommunications and information technology companies, accounting for 40% of the total market capitalization of the entities on the list.

Tencent led the pack at $493.3 billion after adding $261.4 billion to its valuation in 2017. The stock has racked up more gains in the new year, putting the tech conglomerate's market cap at roughly $539 billion based on Jan. 9's closing price in Hong Kong. This brings it within striking distance of Facebook and Amazon.com, which stood at $547 billion and at $600 billion, respectively, at the end of trade on Jan. 8.

Change at the top

Tencent's WeChat social media platform has nearly a billion users, while second-place Alibaba's strength lies in e-commerce. Both have enjoyed meteoric growth, thanks partly to the government largely closing off the internet sector to foreign participation.

The duo's forays into mobile payments, now commonplace in China, have further piqued investor interest. Mobile payments totaled 29.49 trillion yuan ($4.54 trillion) in the July-September quarter. Tencent and Alibaba together control more than 90% of the still-growing market, with such services now used for stores and restaurants, taxis, meals and bicycle rentals.

Despite such problems as mounting corporate and local-government debt, China's economy is expanding well over 6% annually, and consumer spending growth remains in the double digits. Foreign investors are pouring money into Tencent and Alibaba in the hope that their duopoly in payment-processing infrastructure will help them tap Chinese consumer and service markets. Ping An Insurance Group's market cap also more than doubled last year to $193.9 billion. Large-scale investments over the years in artificial intelligence and big data have led investors to view the Shenzhen-based financial conglomerate as a financial technology company. Chairman and CEO Peter Ma Mingzhe, together with Alibaba's Jack Ma Yun and Tencent's Pony Ma Huateng, are collectively referred to as the "three Mas" of corporate China.

A roughly 160% surge in market cap lifted Hangzhou Hikvision Digital Technology, the world's top maker of surveillance cameras, to 40th place. The company has used its close ties to the Chinese government to dominate the domestic market while capitalizing on demand abroad as countries strengthen defenses against terrorism. Hikvision has also actively pursued partnerships with the likes of Intel and SAP to develop cutting-edge new products.

The spread of "internet of things" technology is fueling demand for chips. Heavy investment by both Samsung and TSMC in producing more-advanced semiconductors has convinced investors that the pair can remain competitive in the future. Greg Roh, an analyst at Hyundai Motor Investment & Securities, recommends a "buy-and-hold" strategy for Samsung, given favorable sector fundamentals and improving shareholder return policies.

Roh forecast in a December research note that chip supply, especially DRAM where Samsung holds the biggest market share, will remain tight through 2019. Wafers are expected to be on short supply as well, making it "difficult to increase semiconductor capacity as much as desired, with the exception of tier-one chipmakers or foundry companies," said Roh, hinting that favorable conditions will continue for Samsung and TSMC.

China leads the pack by a large margin, with 26 businesses in the top 50, but Japan is also well-represented, with 14 companies. Its top entry is Toyota Motor in seventh place, while Honda Motor ranked 32nd, reflecting the continued competitiveness and brand strength of the nation's auto industry. But China is making its presence felt here as well. SAIC Motor placed 36th thanks to growing sales of vehicles produced jointly with Volkswagen and General Motors.

Among other Japanese businesses, the stocks of Sony and Nintendo rose significantly in the year. Sony gained as a result of a major cut in fixed costs over the years, while also profiting from smartphone sensors and its gaming business. Its hugely popular console Nintendo Switch has helped to propel higher the share price of the Kyoto-based gaming equipment company.

Keyence saw a particularly marked rise in market cap on strong sales of sensors for factory automation equipment. Overseas sales accounted for a record 54% or so of the overall tally in its most recent data, but President Akinori Yamamoto sees room for further growth beyond its home country. Japanese companies' deep pockets and their ability to spend leaves them well-positioned to profit from the growth of China and other Asian economies.

Numerous Asian companies have seen their stock prices swell at least 10-fold over the last decade, including many that did not make the top 50.

Of the 136 businesses that accomplished this feat -- 50% of the global total -- India accounts for the largest share at 45, including Eicher Motors, whose main products include the iconic Royal Enfield motorcycles and Eicher branded commercial vehicles. Southeast Asia ranks second at 27, followed by Japan at 24, China at 16 and Hong Kong at 9. 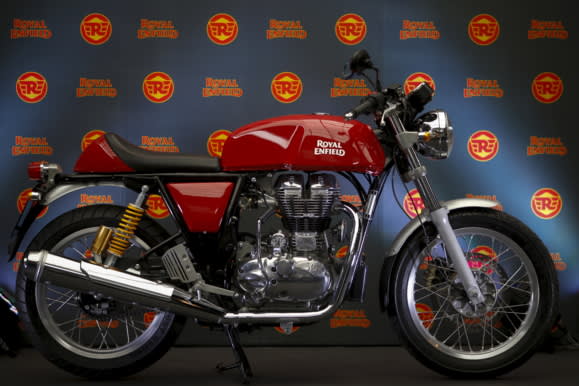 South Korea's Celltrion, which has gained prominence as a developer of biosimilars for blockbuster drugs, enjoyed the sharpest rise among Asian companies valued at $10 billion or more at the end of last year, with its stock price ballooning 75-fold since 2007. Its efforts to develop novel treatments fueled investor hopes of further growth.

Asian stocks put in solid performances across the board last year, with many reaching fresh highs. A total of 84 of Nikkei's Asia300 companies to watch climbed to all-time highs last year.

Several businesses hit post-listing highs Dec. 29, the final trading day of the year, and continued rallying in the new year. These include developer China Vanke -- No. 47 in terms of market cap -- as well as Philippine retail giant SM Investments and Vietnam Dairy Products, or Vinamilk.

But aside from certain tech companies, the Asian top 50 ranking has not changed much over the last decade. Of the 40 Chinese and Japanese businesses on the list, more than half were also there in 2007. 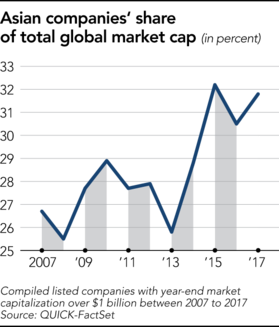 PetroChina, the most valuable Asian company in 2007, was in sixth place in 2017. The other two Chinese oil majors -- China Petroleum & Chemical, better known as Sinopec, and CNOOC -- have also maintained positions in the top 50. The country's largest coal producer, China Shenhua Energy, was also on both lists, reflecting growing energy demand in the world's second-biggest economy.

The situation is similar for corporate Japan, where megabanks and former state monopolies have hung on. Though Mizuho Financial Group dropped off the list, Mitsubishi UFJ Financial Group and Sumitomo Mitsui Financial Group made it. Nippon Telegraph & Telephone (NTT) and Japan Tobacco were once state-owned, and the Japanese finance minister is still legally required to hold a third or more of their outstanding shares.

The big corporate tax cut pushed through in the U.S. last year will likely boost earnings there in 2018, while the Federal Reserve is expected to raise interest rates about three times this year. Should the dollar strengthen against Asian currencies, capital could flow out of Asian markets and into America.