Tencent reboots profits as growth picks up beyond games

HONG KONG -- China's Tencent Holdings handed investors a much-needed profit recovery in the third quarter as revenue rose beyond online games, but the company warned that stricter regulation by Beijing on online advertising could sap growth.

The social media and online game group, which has lost about 40% of its market value since March as China has stalled approval of new games, beat market forecasts thanks to contributions from ads and cloud computing.

But the company noted the risk posed by China's stronger oversight on the internet.

"There are several advertising categories in China that have been hit hard by regulatory measures," chief strategy officer James Mitchell said on Wednesday in a call with analysts following the release of quarterly results.

"Looking forward, if the macro environment deteriorates sharply, that will have a negative impact on our advertisement revenue growth rate," he said.

Mitchell did not specify which categories faced the potential for Beijing's stricter oversight. But Chinese regulators have tightened control over ads for risky financial services such as peer-to-peer lending and bitcoin trading.

Tencent reported a 30% jump in net profit to reach 23.3 billion yuan ($3.35 billion) for the third quarter, surpassing a consensus estimate of 18.9 billion yuan compiled by Reuters. This marked the first profit gain in two quarters and owed to a boost from 8.8 billion yuan in investment gains, notably on online services provider Meituan Dianping, which went public.

Revenue climbed 24% to 80.6 billion yuan. Much of that growth was driven by its booming online advertising business, the Hong Kong-listed company said. 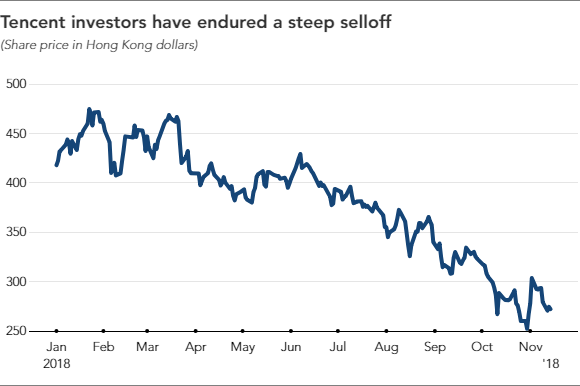 Advertising will "continue to grow strongly and define the longer-term 'blue sky' outlook for the company," Douglas Morton, head of Asia research at Northern Trust Capital Markets, said in a research note. For now, online advertising contributes roughly 20% of Tencent's total revenue. Online gaming's share fell to one-quarter for the three-month period from roughly 40% in 2017.

China's State Administration of Radio and Television, which monitors entertainment content in the country, has licensed no new video games since March amid an ongoing reshuffle of bureaucratic powers and concerns in Beijing about smartphone addiction. Gaming companies in China have suffered revenue slowdowns and scaled back their spending on ads.

Tencent itself recently cut the marketing budget for video games, according to media reports.

Last month, Chinese search engine company Baidu also warned that ad revenues are feeling the pain of China's trade war with the U.S. as well as Beijing's restrictions on gaming.

Besides online advertising, Tencent attributed its better-than-expected results in the quarter to increased contributions from payment-related services and cloud computing.

Cloud computing, which sits at the center of Tencent's recently announced plan for restructuring its portfolio, generated 6 billion yuan in revenue, more than double from a year ago.

But the world's largest gaming company lacked exciting news about its core business. When asked by analysts about Beijing's timeline for resuming game approvals, Tencent President Martin Lau replied that "there aren't a lot of updates."

"We are waiting for the government to start the approval process," Lau said.

Tencent's revenue from mobile games grew 7% on the year to 19.5 billion yuan in the third quarter.

The company has coped with the lengthy gaming license freeze by publishing new titles that were produced by other studios and already have approval. But Tencent executives acknowledged that their gaming business has been hurt as the company cannot cash in on some of its most successful games.

These worries have wiped away nearly $200 billion of Tencent's market capitalization since March. The company's value has fallen to around $330 billion.

In August, Tencent reported its first quarterly profit dip in 13 years. Despite the rebound announced Wednesday, Tencent's revenue and profit both grew at the slowest pace in more than three years.