Tesla in clash of titans with China's Pinduoduo over discounted sales NEW YORK -- Tesla has found itself mired in a conflict with Chinese e-commerce upstart Pinduoduo after a dispute that started last month over discounted sales of Model 3s on the platform escalated this week.

The American electric vehicle maker, which refused to deliver cars purchased from the discount retailer citing its no resale policy, on Tuesday disputed a report that it allowed one such order, and urged Pinduoduo to stop "manipulating public opinion for its own gain." 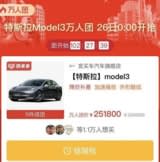 A screenshot of Pinduoduo's Tesla discount campaign as circulated in Chinese media.

Tesla, which counts China as a key market, clarified that it was not involved almost immediately after the campaign was announced. About three weeks later, it canceled an order made from Pinduoduo, and urged the buyer to order directly from Tesla instead.

The automaker, co-founded by billionaire Elon Musk, told Chinese news outlet Sina that it was willing to offer legal assistance should the buyer decide to sue Pinduoduo.

The events reflected a clash between Tesla's direct-sale model, which helps it control its brand image as well as customer experience, and Pinduoduo's model of group-buying and heavy markdowns.

Pinduoduo, nearly 20 years the junior of Alibaba Group Holding and JD.com, China's top two e-commerce giants, was known to be primarily popular in smaller cities or rural areas and at times accused of carrying knockoffs on its platform.

But in recent years it has been trying to shed this image in search for a larger, more diverse user base.

Pinduoduo is listed on the Nasdaq Stock Market in New York and is valued at over $114 billion despite never making it out of the red. The company spends heavily on marketing in the form of price subsidies.

In the past, other high-end brands such as Apple, La Mer and Dyson have also pushed back against Pinduoduo, saying they did not authorize sales of their products on the platform.

Tesla, whose success in China has contributed to its share price more than quadrupling this year to become the world's most valuable carmaker, has a presence on Alibaba's Tmall, but the store only offers customers test drives and sells accessories.