SHANGHAI -- China's e-commerce behemoth Alibaba Group Holding is quietly building a whole economic sphere based on the smartphone payments and services it provides.

From online shopping, grocery stores and finance to health care, the online giant is moving into more and more services that affect many aspects of life through smartphones. In exchange for the conveniences on offer, however, users are giving up their personal information in unprecedented ways.

Moreover, some of that data -- which includes purchase history, personal interests and biometric authentication -- can be accessed by the government, and is increasingly becoming a source of friction with the U.S.

At a Kentucky Fried Chicken in the eastern city of Hangzhou, a student leaned toward a cash register to pay for her meal. Using facial recognition technology, the unmanned device processed the payment and displayed a "payment complete" message.

Alibaba, which developed the register, holds data for biometric authentication, such as facial recognition data. The company holds data on some 600 million people, including purchase history, educational background, assets, records of hospital visits and drug prescriptions. It is also a world leader in technologies like artificial intelligence.

The company also assigns credit scores to users under a system called Sesame Credit, in which the score rises if, for example, the user owns a car or has good credit on a credit card. The higher the score, the more preferential treatment accorded to the user. The scores are also said to be used by employers for background checks and by families looking for marriage prospects. 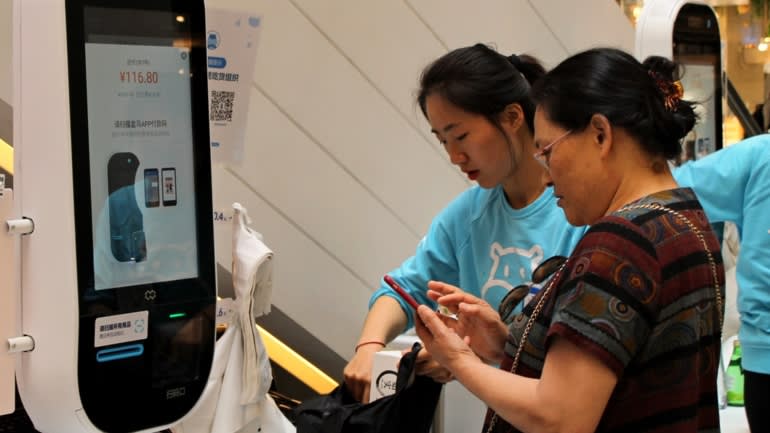 Customers use their smartphones to pay in a Shanghai supermarket affiliated with Alibaba.(photo by Naoki Matsuda）

Despite the dystopian implications of such a system, Chinese in growing numbers are relying on Alibaba's services for their convenience. An example is Hema supermarket, which delivers fresh fish and fruit within 30 minutes of an order from a smartphone if the customer is located within 3 km of an outlet. A real estate agent in Sichuan Province said condominiums can rise 10% in value just for being located within that range.

The sum of payments made through smartphones in China is estimated to have reached 160 trillion yuan ($23.4 trillion) in 2018, up by half in just one year. Some shops are now refusing payment by cash, inconveniencing some consumers. The government has instructed 600 such retailers, including Hema, to accept cash.

Alibaba is growing faster than U.S. tech giants did during their rise. The recent stock plunge has pushed down its market capitalization by 30% from its peak, but the market cap topped the $500 billion mark for the first time only three and a half years after its listing. It took Amazon.com 20 years to do the same. European and U.S. authorities are strengthening their vigilance on misuse of data, among other steps, as criticism grows against the "Amazon effect," in which the stock prices of companies get hammered on fears that Amazon.com is about to enter yet another sector.

Alibaba is also having a huge impact on the Chinese economy, putting many retailers out of business, but the two companies mark a stark contrast in their relations with their home governments.

Alibaba founder and Chairman Jack Ma Yun was lauded by Chinese authorities as a "digital economy innovator" at a Dec. 18 ceremony marking the 40th anniversary of the country's economic reforms. It was a sign of Beijing's heavy influence on Alibaba.

Chinese authorities take a keen interest in the vast trove of personal information held by Alibaba. In June 2018, the People's Bank of China launched Nets Union Clearing Corp., a clearing platform for online payment services, in collaboration with Alibaba and other tech companies.

Alibaba is also tasked with monitoring cities in cooperation with the security forces. In Hangzhou alone, it analyzes images from more than 4,500 security cameras for the police.

Despite concerns from the international community, Chinese companies have no option but to follow the Communist Party's instructions. In 2017, China enacted a National Intelligence Law that requires companies and individuals to provide personal information to the authorities, prompting the World Trade Organization to set up international rules, including bans on data censorship by states.

The more data Alibaba collects, the more concerned the international community, including the U.S., will become.