TOKYO -- The collapse of Thomas Cook Group on Monday not only left 600,000 stranded holidaymakers feeling miserable, it also damaged the reputation of "China's Warren Buffett."

Guo Guangchang chairs Fosun International, which together with its subsidiary is the largest shareholder in Thomas Cook. In the past several years the Chinese billionaire has overseen a roughly $18 billion acquisition spree, snapping up assets both at home and abroad -- from European resort operators to Cirque Soleil, Indian pharmaceutical interests and a Portuguese health care company.

While many of Guo's bets have paid off, critics say it may be time for the 52-year-old to rethink his aggressive expansion strategy after apparently underestimating the challenges facing Thomas Cook, the 178-year-old tour operator based in the U.K. that collapsed spectacularly this week.

In August, Fosun proposed jointly injecting 900 million pounds ($1.1 billion) into the British company, of which it would provide half, in return for a controlling stake in its tour business and a minority interest in its airline operations. But when it emerged that Thomas Cook would need an additional 200 million pounds, the deal collapsed.

As a result, Fosun and its Hong Kong-listed travel subsidiary Fosun Tourism Group have seen their combined 18% stake wiped out -- an outcome likely to prove more damaging to his reputation than his finances, given that Forbes estimates Guo's personal net worth at $5.8 billion.

Jonathan Galligan, group deputy head of research at CLSA, argues the fiasco will have a "minimal financial impact" on Fosun Tourism. The Chinese travel subsidiary owned 11.4% of Thomas Cook as of June, but this represented just 0.2% of the company's overall gross asset value in estimated fiscal 2019. Galligan said that while it is "unclear" whether additional funding will be needed in the future, Fosun will not need to pay the proposed 450 million pounds for the recapitalization.

However, Fosun's position as a prominent investor, and the sometimes magic aura that surrounded self-made entrepreneur Guo, has already taken a much bigger hit.

Benjamin Cavender, managing director at China Market Research Group, described the collapse as a "cautionary tale for Chinese conglomerates seeking to build through acquisition of foreign companies." These conglomerates, he said, often do not "look closely enough at the underlying value of the assets."

Guo, who was born in the provincial eastern city of Dongyang, has been a busy buyer, spending an estimated $18 billion in the last five years alone, according to Bloomberg. Fosun acquired an initial 5% stake in Thomas Cook in 2015, which it gradually built up, and it also bought Canadian circus company Cirque du Soleil, France's luxury brand Lanvin and Portuguese health care provider Espirito Santo Saude, now Luz Saude.

These purchases were part of a wave of opportunistic Chinese overseas expansion that followed the global financial crisis even as Chinese companies rose a riding tide of domestic growth. Flush with cash and looking to follow the country's rising middle class as it bought more at home and abroad, they snapped up assets in Europe, the U.S. and elsewhere.

For Fosun, its overseas acquisitions soon came to account for a significant part of its earnings.

The conglomerate breaks its business into three divisions: financial services, health care and lifestyle. In fiscal 2018, it generated 109.35 billion yuan in revenue, with 40% coming from the lifestyle segment that includes Thomas Cook. Revenue in the first half of this fiscal year was 68.47 billion yuan, up 57% on the year, while profit attributable to owners of the parent was 7.6 billion yuan, up 11%. 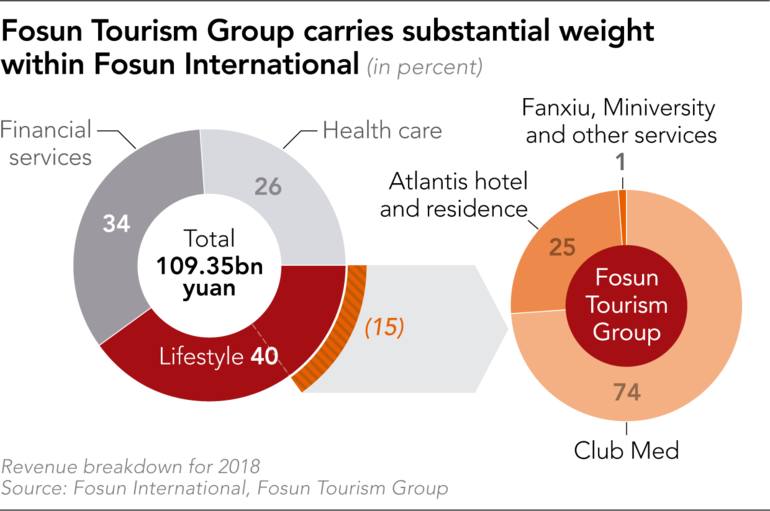 One of Fosun's most notable acquisitions was the 2015 purchase of French resort operator Club Med for 939 million euros ($1.1 billion).

Fosun Tourism Group, which listed in 2018, was originally established in 2016 to manage Club Med and succeeded in turning around the struggling resort chain. Club Med went from a 9 million euro net loss for fiscal 2014 to a 406 million yuan ($58.8 million) operating profit in fiscal 2018, fueled by an influx of Chinese middle-class. China is now Club Med's second-largest market after France.

"Fosun has managed to amass a compelling travel empire," Cavender said, due mainly to its ability to turn Club Med into a recognized brand among Chinese consumers and set up a series of developments in China, including Club Med resorts.

This success led Fosun to look for similar prospects elsewhere among similarly renowned European brands that were once pioneers in travel and leisure. In 2016 it established Thomas Cook China, a joint venture tour operator targeting local Chinese customers. Fosun Tourism planned to build Thomas Cook-branded hotels in its upcoming two resorts in China in late 2020, to be managed by the joint venture. Jim Qian, Fosun Tourism's chairman and CEO, told the Nikkei Asian Review in May that the two companies had achieved "very good synergies so far."

Thomas Cook, meanwhile, issued three profit warnings in less than a year and reported a half-year loss of 1.5 billion pounds in May, citing the impact of Brexit turmoil on holiday bookings and its own delay in going digital. One investment bank estimated the company's equity value at zero, and it has now gone into administration.

On paper, Fosun's Thomas Cook strategy made sense. Fosun had hoped to funnel some of China's massive tourism traffic through Thomas Cook's pipeline. But the British company "was a massively indebted and unprofitable company with an outdated business model being battered online," said Silvers from Kaiyuan Capital. This, he added, was probably the reason why Fosun walked away when the British company urgently needed additional injection.

Following the collapse on Monday, Thomas Cook China issued a statement saying the company is unaffected by the issues facing by Thomas Cook in the U.K. and is operating normally, as the joint venture was majority owned by Fosun.

Andrew Sangster, editor and owner of hotel investment media Hotel Analyst, argued that it may still be possible to build-out Thomas Cook-branded hotels but questioned whether "the brand now [is] too tarnished," adding that it is "most likely the hotels will be built but under a different brand."

Financially untroubled but reputationaly dented, Fosun may well continue to feel the ripple effects of Thomas Cook's downfall for some time.