JAKARTA -- Tokopedia, Indonesia's largest online retailer, is determined to grow beyond that identity and believes it has found a match that fits its strategy: Bridestory.

The $7 billion e-tailing startup, backed by the SoftBank Vision Fund and China's Alibaba Group Holding, made the Indonesian online bridal services provider a wholly owned subsidiary in June. The purchase price was not disclosed, but local media reported it was around $30 million.

Bridestory, established in 2014, lets customers arrange wedding ceremonies and parties by matching them with planners and other service providers. About 3.5 million couples have used the site. Tokopedia founder and CEO William Tanuwijaya found the company attractive because, as a lifestyle service, it seemed to fit Tanuwijaya's vision for the next 10 years.

He wants Tokopedia, which launched in 2009, to become more of a commercial "infrastructure" company that supports all sorts of businesses using technology.

Tokopedia has followed the marketplace model of e-commerce, attracting 5 million merchants to its site partly by eliminating listing fees. Many of the sellers are sole proprietors.

When Tokopedia ran a sale during the Muslim holy month of Ramadan in May, the value of goods and services that changed hands over the site reached a record $1.3 billion. Tanuwijaya expects the transaction value will hit about $15 billion for all of 2019.

Still, he has expressed his ambition to wean Tokopedia off its reliance on e-tailing. Although Indonesia's online retail market is growing fast, it still represents just 3% to 5% of overall retail. Put another way, over 90% of the market is still occupied by physical retailers. 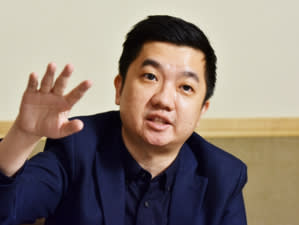 Tokopedia CEO William Tanuwijaya aims to support all sorts of businesses with technology.

Tanuwijaya wants to tap this vast segment in the next phase of Tokopedia's growth. The unicorn -- as startups valued at over $1 billion are known -- is providing retail shops with technologies it has honed through e-commerce, including e-payments and delivery systems guided by artificial intelligence. This way, Tanuwijaya said, Tokopedia can help small retailers that usually operate within a limited geographic scope reach customers nationwide, or enable restaurants to start accepting mobile payments.

Archrival Bukalapak.com, another Indonesian e-tailer, is pursuing a similar strategy of reaching out to small businesses. And competing mobile payment providers are actively courting stores and restaurants to expand their user bases. So while the country is home to a large consumer market, Tokopedia faces plenty of players fighting over the same pie.