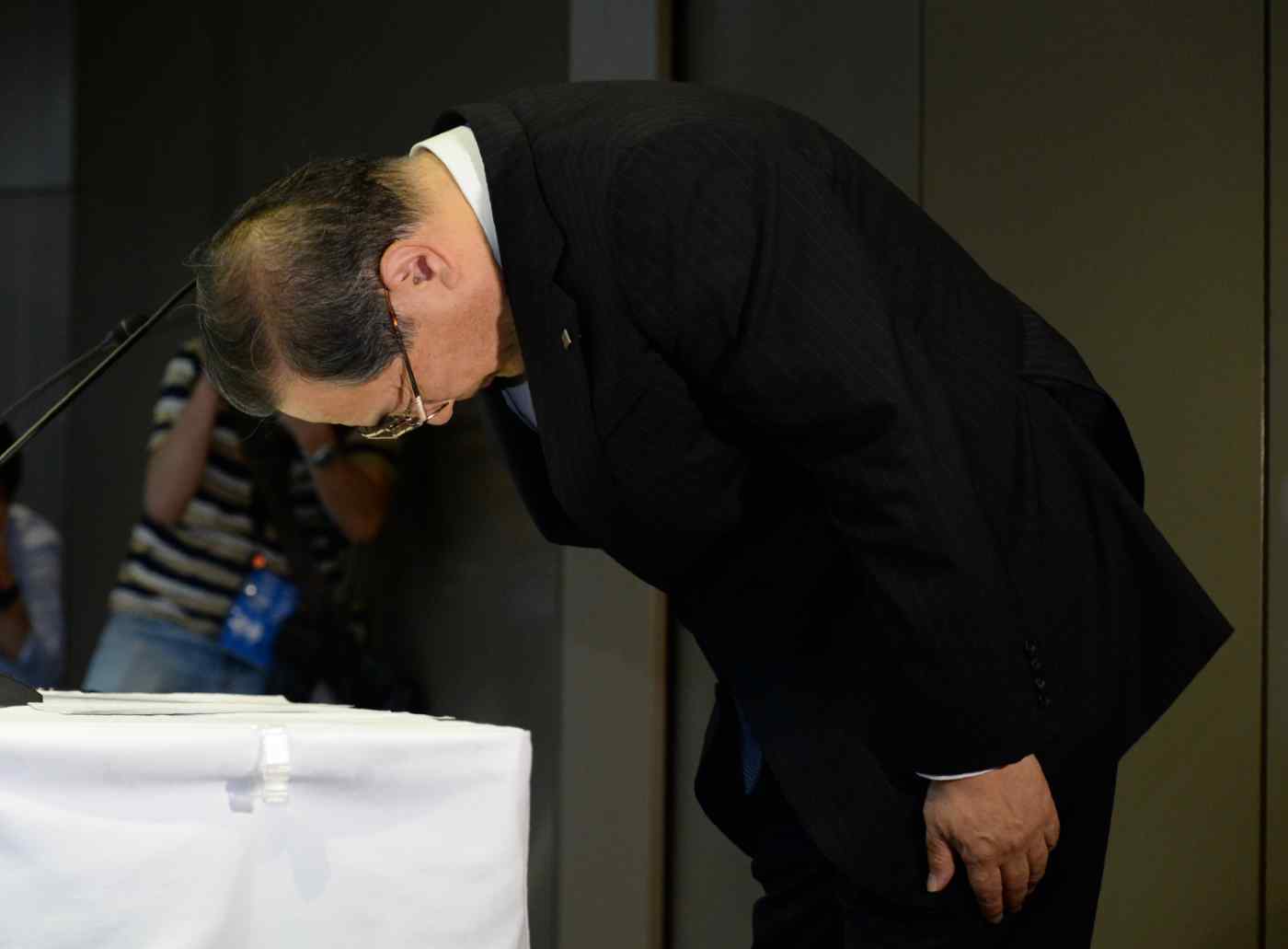 Muromachi apologizes for the failure of the probes to uncover all of Toshiba's accounting problems.
September 1, 2015 00:20 JST | Japan
CopyCopied

TOKYO -- Toshiba has postponed releasing fiscal 2014 results for a second time now that voices within the industrial conglomerate have made new claims of improper accounting beyond that already disclosed.

Two weeks ago, Toshiba gave a preview of its fiscal 2014 results and upcoming restatement of past earnings. Then, as it was finalizing the numbers, new cases of improper or suspect accounting came to light. Some of the 10-odd cases requiring investigation were brought to management's attention by whistleblowers. Such reports from within the organization have increased since an independent investigative panel began probing accounting improprieties this May.

"There is a newfound awareness among employees that whistleblowing helps improve our corporate culture," President Masashi Muromachi told a news conference Monday. "I believe it is important to come to terms with this in order to regain shareholders' trust."

Though Muromachi tried to put a positive spin on the situation, the rash of whistleblower reports paints an unfavorable picture. Toshiba set up an internal investigative committee in April, before the independent panel got down to work. It also carried out a separate, parallel audit of 584 subsidiaries. But this triple probe apparently failed to get to the bottom of the rot within the organization. The independent panel's own credibility now appears likely to be called into question. Muromachi acknowledged that the investigation had its flaws.

Olympus' 2011 book-cooking, which led to the arrest of executives, delayed the optical equipment manufacturer's earnings statements by about a month. Toshiba's fiscal 2014 results have been on hold for four months.

Toshiba has been approved for a one-week extension of its reporting deadline to Sept. 7. Some 250 people are working on the earnings statements, including accountants at auditing firm Ernst & Young ShinNihon. Should Toshiba need even more time, it may lose investor confidence.

Meanwhile, the company is stepping up an operations overhaul that had also bogged down in the accounting scandal.

Toshiba said Monday that it would sell a 30% stake in Topcon for 50 billion yen to 60 billion yen ($409 million to $491 million) to use assets more efficiency and strengthen its balance sheet.

The Tokyo-based company makes positioning systems for construction machinery, as well as eye care equipment and other precision devices. Although its technology has a strong reputation, Toshiba sees little synergies from the capital tie-up and has decided to cash out.

This marks the latest divestment by Toshiba since its July sale of a small stake in Finnish elevator manufacturer Kone. Toshiba will likely continue shedding assets, a process that could help it borrow from main banks at favorable terms.

Muromachi said Toshiba intends to indicate the direction of structural reforms in individual business segments by year-end. The company is expected to announce overhauls of its white goods and personal computer businesses.

Outside directors are to make up a majority on a newly constituted board taking over at the end of September. Whether Toshiba can leverage this independent oversight to push ahead with restructuring remains to be seen.