TOKYO -- When Japanese bathroom fittings maker Toto began operating in China in 1980, "toilet" often meant a hole in a floor.

Now the company is promoting simple but sophisticated wares to the country's "new middle class" -- a demographic expected to grow to several hundred million people in the next decade.

The latest sales figure was already up 15% on the year. Chinese President Xi Jinping is promoting a "toilet revolution" to modernize restrooms and improve the international reputation of the world's No. 2 economy.

In recent years, Toto has provided toilets and other products not only to the Chinese locations of luxury hotel chains Shangri-La and Park Hyatt, but also to Beijing's National Stadium, known as the Bird's Nest, the centerpiece of the 2008 Summer Olympics.

Toto's exhibit at this year's Kitchen & Bath China -- one of Asia's largest trade fairs for sanitary ware -- underscored the company's growing presence in the country.

The fair in Shanghai attracted 110,000 visitors, 60% of whom were dealers. Most of the 6,000 exhibitors were Chinese, with only a small number of Japanese companies on hand. But the Japanese booths attracted crowds.

Toto's section was five times larger than the average, at roughly 500 sq. meters. It showcased the company's ability to coordinate entire bathrooms, with toilets and other products. The Toto name is a familiar sight at the show: The manufacturer has participated 18 times. 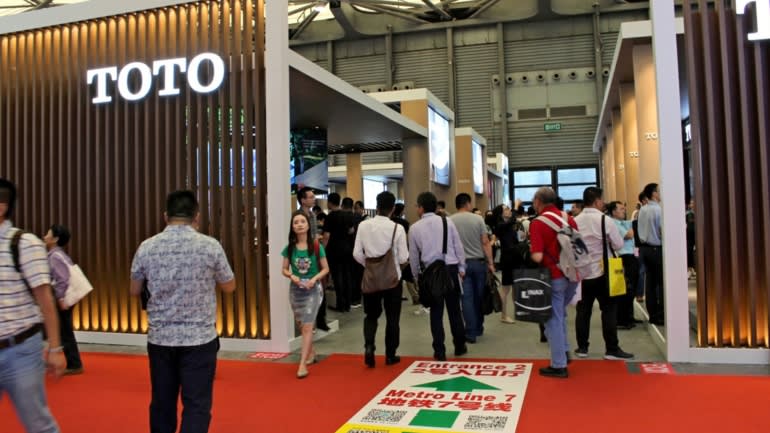 Drawing particular attention was the Washlet Plus, a version of Toto's signature electric bidet toilet available only outside Japan. The seat and bowl combination can be customized, while the piping and mechanical parts are built-in to give a simple, stylish look.

For decades, Toto has focused on selling high-quality, functional products in China -- even in the early years, when many Chinese people did not have adequate access to modern toilets. The company was confident of the growth potential of the Chinese economy, and targeted wealthier clientele.

Today, the majority of Toto's customers earn more than 500,000 yuan a year on average. This explains the company's efforts to provide high-end products to places where the well-off tend to congregate -- five-star hotels, high-rise buildings, state guesthouses and airports.

Though Toto struggled to find staff and build local links when it started out in China four decades ago, it has since developed a strong sales network. Around 50 local dealerships across the country have built ties that help reach the wealthy set.

Typically in China, property owners -- be they developers or individual condo buyers -- decide which fittings to install. Sales can rely heavily on the dealers' ability and networks.

Now Toto wants to build on that foundation by targeting the new middle class in Shanghai and other big cities.

Toto has clearly noticed this, judging from its lineup at the Shanghai trade show. The company produced a simple bathroom dresser exclusively for the Chinese market, for example.

When Toto enters an overseas market, Fukazawa said, it wants to be "recognized not as a 'foreign brand' but as 'this country's Toto.'"

"China is no exception."