Water treatment company has less than 30 days to avoid liquidation SINGAPORE -- Pressure is mounting on the Singapore government to seize a troubled desalination plant owned by debt-laden Hyflux after a bailout deal with an Indonesian consortium led by Salim Group collapsed Thursday.

That would enable Hyflux "to reach out to a wider pool of investors which may not otherwise have been interested in an investment in the group had this asset remained within the group,'' the company's board said in a statement.

With the government stating that it will not rescue stock and bondholders, and Hyflux facing liquidation unless a savior emerges by the end of this month, retail investors now face the prospect of losing their entire investment.

It's a far cry from 2011, when the cachet enjoyed by Hyflux was such that retail investors were allowed to dip into their retirement savings to buy the water treatment company's preference shares.

"The immediate issue is the controversy over how retail investors who placed their trust in what they thought was an icon of Singapore are furious, and their anger has been public and so has affected many other Singaporeans," Manu Bhaskaran, chief executive officer of independent research and advisory firm Centennial Asia Advisors, told Nikkei Asian Review. "It also raises questions over whether there is adequate protection of retail investors in Singapore." 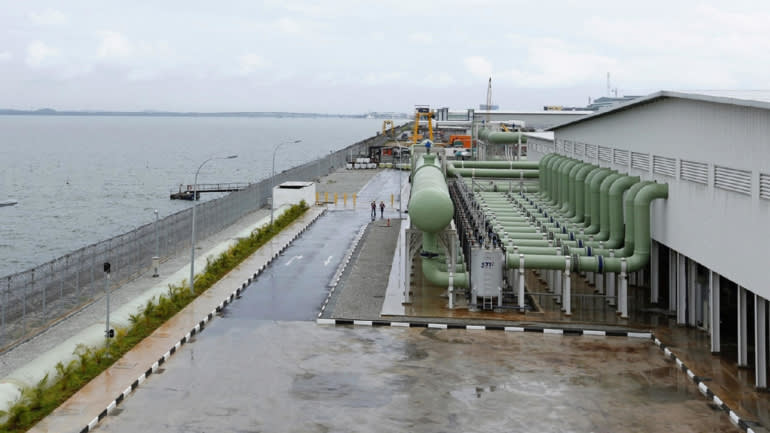 Nearly a year since the 30-year-old water treatment company filed for court protection, Hyflux is saddled with SG$2.7 billion ($2 billion) worth of debt and a portfolio of stricken assets that not even the most sanguine of white knight investors appears to want.

Wrapped up in the rise and fall of Hyflux is not just the $900 million injected by the 34,000 retail investors who believed in the company, but an issue even more critical to the tiny city-state of 5.6 million people: water.

It's so ingrained in the Singapore psyche that many preschoolers are taught a "shower dance" instructing them how to get in and out of the shower inside five minutes and save water.

Founded in 1989 by entrepreneur Olivia Lum, still the company's chief executive officer and it's largest shareholder, Hyflux's water treatment and desalination technologies came to be seen as a symbol of Singaporean self-reliance that benefited the entire country.

Of Singapore's four national "taps" -- desalination, recycling, water imports and its own reservoirs -- Hyflux played a key role in the first two. Growing steadily over the years selling water to Singapore's water authority, the company's profits kept rising, reaching a peak of SG$88 million in 2010.

The turning point for Hyflux came in 2011, when the company won a government tender to develop the country's biggest desalination plant, Tuaspring. It was a fateful decision, and sowed the seeds of Hyflux's undoing.

Promising to supply water at a significant discount to rival bidders, Hyflux believed that by building a power plant in tandem with the desalination plant, it could use the profits from selling electricity to subsidize the cost of producing water.

The only problem for Hyflux was that electricity prices collapsed, and in 2017 Hyflux booked its first net loss of SG$116 million. During the nine months through to September 2018, Hyflux's losses reached SG$1.049 billion, mainly due to a SG$916 million of impairment loss mostly on the Tuaspring plant.

"Overall, the plant is a toxic asset,'' Leong Ching, Co-Director of the Institute of Water Policy and Assistant Professor at Lee Kuan Yew School of Public Policies, told Nikkei.

"The plant is already operationally in trouble. Add to that the age of the plant and the fact that membranes need to be replaced, we can see for sure this is something that requires an injection of funds," she said, adding that whoever took over the plant would not only have to spend millions to restore it to operational order but would then be required to sell the water at a rock bottom price. 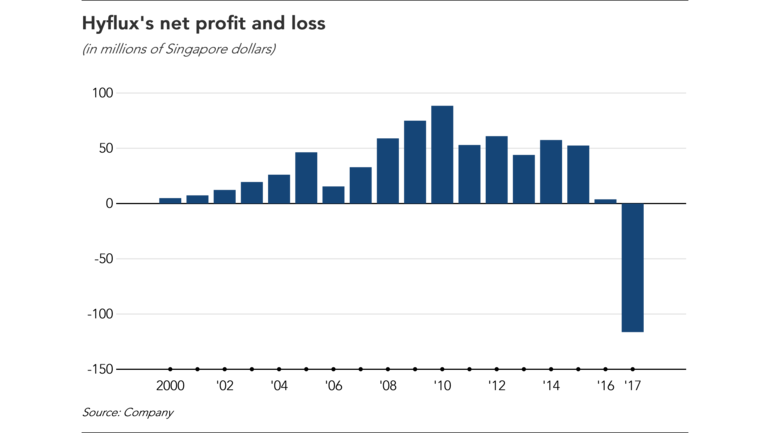 Heightening the saga around Hyflux is the fact that retail water prices have risen sharply, increasing from SG$2.10 per cubic meter to SG$2.74 over the two years through 2018. Singaporeans now pay almost twice as much for water as people in Hong Kong and Seoul.

With the government led by Prime Minister Lee Hsien Loong explaining that the price revision was "needed to meet the higher costs of treating and supplying water,'' water prices could rise even further if Malaysian Prime Minister Mahathir Mohamad follows through on this threat to charge more for the water that Malaysia pipes directly into Singapore.

Still, even if Hyflux ends up being liquidated, the long-term impact on consumers and businesses is expected to be limited.

"In terms of inter-linkage with other businesses, I don't believe the impact is big," said Ezien Hoo, a credit research analyst at Singapore's Oversea-Chinese Banking Corp. "In terms of effects to the market, potentially there could be a regulatory reaction to check some of the processes for the selling of retail bonds given the confusion and impact among retail investors."

For Manu Bhaskaran of Centennial Asia Advisors, perhaps the saddest issue to arise from the saga is the flame-out of a rare Singapore success story.

''It's not so much a case of national pride being dented, Singapore is still a success story in so many ways,'' said Bhaskaran. "More a case of why we have not produced sterling good companies like other countries do.''