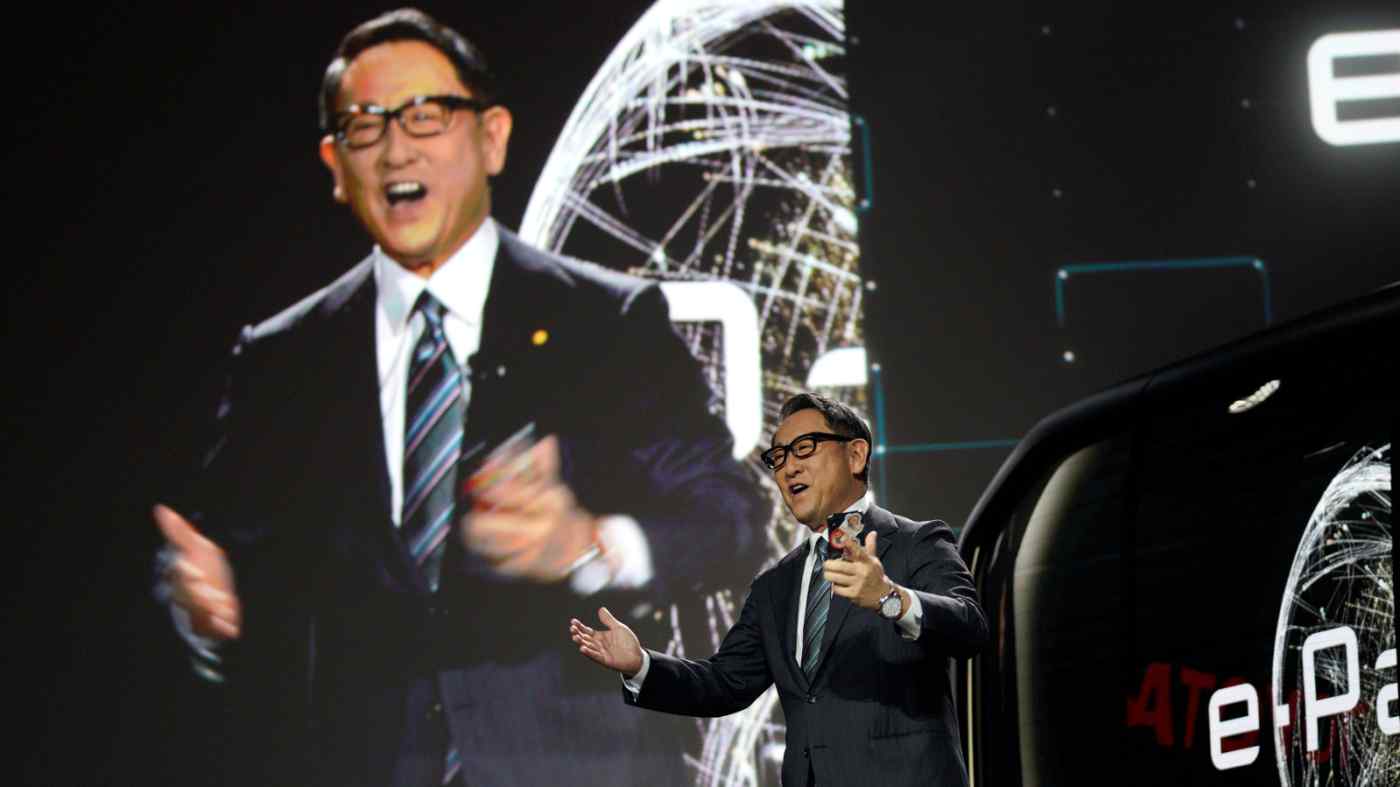 NAGOYA, Japan -- Toyota Motor plans to shell out a record 2.45 trillion yen ($22.3 billion) on R&D and capital spending this fiscal year as the advent of technologies such as self-driving cars forces the automaker to compete with deep-pocketed tech giants such as Apple and Google.

Fiscal 2017 earnings released on Wednesday showed Toyota retaining the top spot in profits among global automakers, with net profit far ahead of rival Volkswagen at 2.49 trillion yen. The Japanese automaker ranks third in sales, behind Volkswagen and the Renault-Nissan Motor-Mitsubishi Motors alliance. Though the company forecasts a slight profit decline for this fiscal year owing to a stronger yen, it expects business to remain solid otherwise.

Yet President Akio Toyoda struck a cautious tone in an earnings briefing at the company's main Tokyo office. In a wide-ranging speech lasting more than two hours, he warned of a "life-and-death struggle" as "our rivals and the rules of competition change."

Calling the current competitive environment "uncharted territory," he stressed a renewed focus on Toyota's traditional strengths of steady cost-cutting and the efficient Toyota Production System, where he said the automaker's "true worth" lies.

Research and development was positioned as a top priority as well. "Technology companies are using their abundant resources to make investments at speeds several times faster than us," Toyoda said.

The planned investment of 2.45 trillion yen, the automaker's first record in 11 years, represents a 30% increase from five years earlier. The figure includes an all-time high of 1.08 trillion yen for R&D, with 35% going toward autonomous driving and other emerging technologies, in part to compete with foreign tech companies like Google and China's Baidu.

Toyota formed an autonomous-driving venture in March with affiliates Denso and Aisin Seiki. The venture, led by the former head of Google's robotics division, plans to invest more than 300 billion yen over the next several years. The company president also said the automaker will revamp mainstay cars in June and bring connected vehicles on the market.

As new fields such as self-driving cars become a battleground for the industry, R&D budgets will determine how effectively automakers can compete. Data from QUICK-FactSet pegs Toyota's R&D outlays over the most recent four quarters around $9.4 billion, behind industry leader Volkswagen yet ahead of many other peers including Daimler and BMW.

But foreign tech companies have the wherewithal to keep pace. Apple invested about $12.7 billion in R&D over the past year -- close to Volkswagen's total -- while Google parent Alphabet spent nearly double Toyota's figure at $17.7 billion.

Comparing the operating cash flows that fund this investment further underscores the difference in financial firepower. Though Toyota easily brings in more cash than other automakers, including Volkswagen, it lags slightly behind Google and far behind Apple.

The need to devote more money to R&D and other investment will force Toyota to trim more fat from the development and production of its existing vehicle lineup. In addition to greater use of the Toyota Production System, the automaker will tap expertise from partners such as Suzuki Motor and Mazda Motor.

Toyota also needs to worry about rivals gaining ground. Though the Japanese automaker's net profit grew about 40% over the past decade, profits more than doubled in that period at Volkswagen, Daimler and BMW, thanks partly to their success in emerging markets. Volkswagen's sales have soared in China -- the world's largest auto market -- while Toyota's market share has barely budged in China and India.