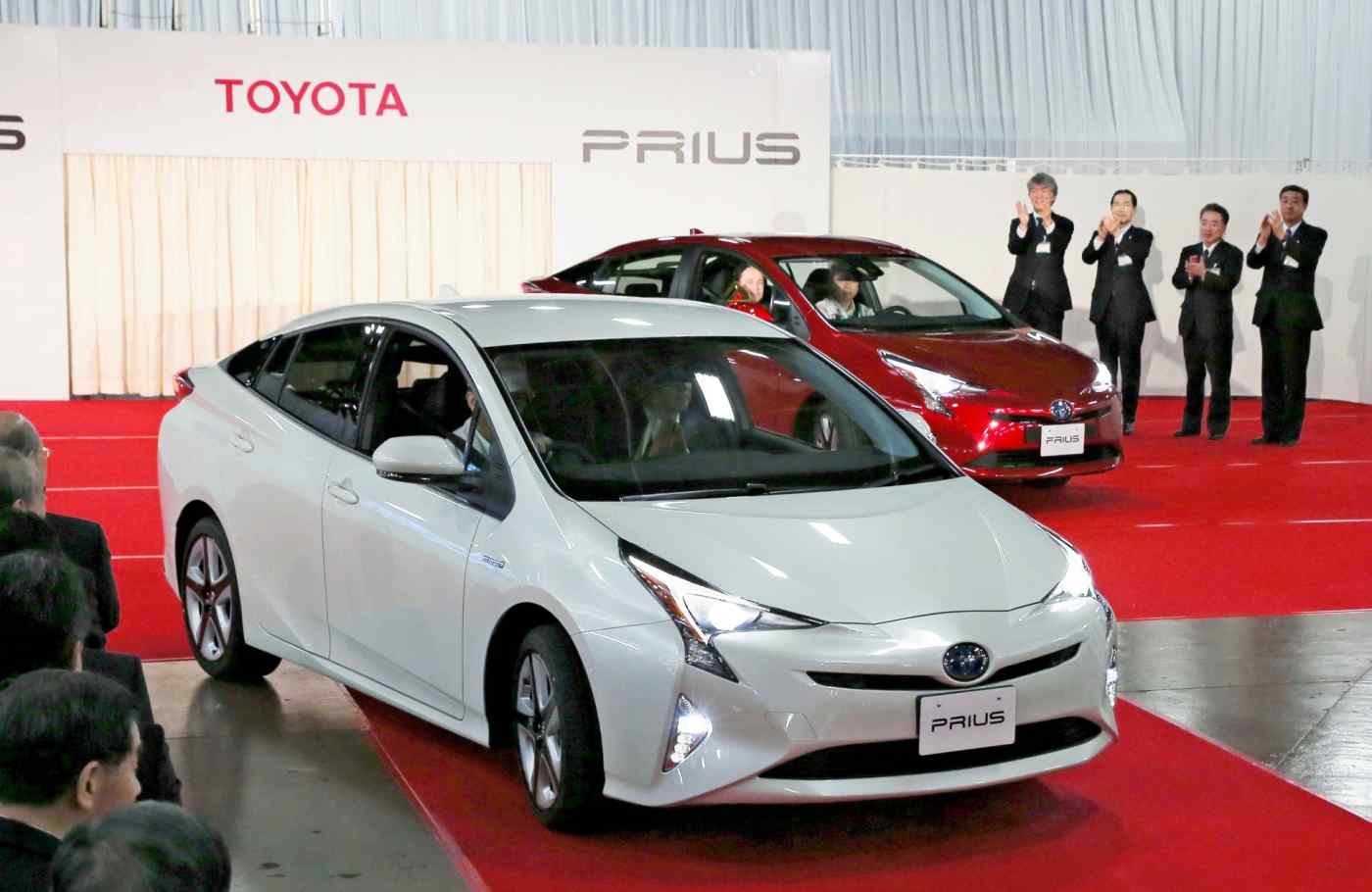 A ceremony is held at Toyota's Tsutsumi plant in the city of Toyota to mark the start of production of the new Prius. The automaker is producing about 40,000 units of the new Prius per month as the new hybrid model, launched in December, has proved very popular.
SATORU NIHEI, Nikkei staff writerJanuary 5, 2016 19:00 JST | Japan
CopyCopied

TOKYO -- Toyota Motor is expected to notch up another year of bumper profits, but many investors are skeptical about the auto giant's continued growth in the coming years.

Toyota is now working to reinvent the way it designs and manufactures cars to keep its growth engine humming.

The automaker's business is definitely in fine shape, with sales of its key models like the all-new Prius and luxury Lexus brand vehicles on a roll. In fact, Toyota is struggling to manufacture the Prius fast enough to meet demand.

The company's Tsutsumi plant in the city of Toyota, Aichi Prefecture, has been running at full tilt to crank out new versions of the Prius since production began in November. While inspecting the plant recently, Toyota CEO Akio Toyoda said, "I will join in (to work on the production line) if necessary," in a pep talk to workers.

Toyota is currently producing the Prius at a rate of one unit per minute in response to strong demand for the new model, which combines high gas mileage with improved driving performance.

At Toyota, new university graduates are traditionally assigned to production lines to learn about the nitty-gritty of the shop floor during their first year at the company. But now new recruits have to work at production lines in their second year as well to keep the plant running at full capacity. Even some clerical employees are working at the plant as Toyota has received far more orders for the new Prius than it had expected.

Sales of its Lexus cars are also running at a fast pace, driven mainly by exports to North America.

Toyota is on the track to post a record group operating profit for the year ending in March. The company has forecast a 2% pickup in profit to 2.8 trillion yen ($23 billion), but many analysts are betting on a rise to 3 trillion yen or higher.

The company's solid earnings performance at the moment, however, has not translated into a rise in its market value.

Toyota's stock fell for the first time in four years in 2015, when the benchmark Nikkei Stock Average spiked 9% and climbed for the fourth consecutive year. At the end of the trading day on Jan. 4, Toyota's stock price was 16% lower than its high last March.

Toyota's price-earnings ratio, or the current share price relative to the company's per-share earnings, has been hovering around 10, lower than the average of 16 for all stocks listed on the First Section of the Tokyo Stock Exchange.

According to Richard Kaye of the French investment company Comgest, foreign investors are not buying Toyota shares because they are not convinced that the automaker will grow in the next fiscal year onward.

In fact, Toyota's profit growth is expected to lose steam in the year that begins in April. One of the factors that point to slower profit growth for the company is that the positive effects of the weak yen on the carmaker's bottom line will fade. A weaker yen is pushing up Toyota's operating profit by an estimated 115 billion yen in the current fiscal year. But there will be no such boost from exchange rates in next fiscal year.

In addition, Toyota's operations in emerging countries, which were supposed to power the company's medium- to long-term growth, have been disappointing.

Sales of the new IMV vehicles, which are strategic models for emerging markets and were revamped in the summer of 2015 for the first time in 11 years, have been much weaker than expected. An analyst at a foreign brokerage blames the lackluster sales of the new IMV models on their luxurious interiors, which have pushed up their prices.

Toyota has projected its global car sales in 2016 to be 10.11 million units, almost unchanged from the previous year.

Strong sales of the Prius and Lexus cars in markets in major industrial countries offer little reassurance for the company's profit prospects for the coming years because these markets are more or less saturated. Toyota is facing the challenge of how to continue its profit growth when major car markets are unlikely to grow as fast as in past years.

Investors are focusing their attention on Toyota's new approach to car manufacturing, dubbed Toyota New Global Architecture. The strategy involves using common parts and platforms as much as possible to cut both manufacturing and development costs, and it is designed to ensure profits for Toyota regardless of the demand situation. Using a baseball analogy, CEO Toyoda has compared the new approach to a batter changing his hitting style.

The Tsutsumi plant is an important predictor for Toyota's future because it is the first plant to adopt this architecture. As testament to Toyota's commitment to the approach, all 30,000 components of the new Prius have been redesigned for it.

The architecture will also be used for such mainstay Toyota models as the Camry and Corolla. By 2020, half of all Toyota cars will be made under this system.

Changing the approach to car manufacturing, however, requires massive advance investment. Toyota's spending on research and development is likely to surpass 1 trillion yen again in the next fiscal year.

Some industry analysts are not quite optimistic about the effectiveness of the reform. It is not clear whether this approach will work for smaller cars as well, points out Takaki Nakanishi, CEO of Nakanishi Research Institute, which specializes in the auto industry.

Toyota is likely to issue "Model AA" shares again in fiscal 2016. The carmaker issued this special class of shares last year, attracting many investors. As with bonds, the principal on these shares is to be guaranteed. Unlike bonds, holders are to get voting rights. Buyers must hold the shares for five years. After that, they have the option to sell them back to Toyota at the original purchase price.

The special stock issue has been criticized by foreign investors for weakening corporate governance. Toyota needs to show a clear blueprint for using the money raised to ensure sustained growth in the years ahead.