TOKYO/SINGAPORE -- Indian hotel startup Oyo is being courted by some of the biggest names in the travel industry, with Airbnb and China's Ctrip recently announcing investments and tie-ups with the Gurgaon-based company.

The two giants say Oyo's reach in emerging markets and smaller cities will complement their own offerings, but analysts say competition may be inevitable as the startup pushes into fields where Airbnb and Ctrip already have strong footprints.

"Oyo has grown very quickly and is making something unique," Airbnb co-founder and chief strategy officer Nathan Blecharczyk told the Nikkei Asian Review in an interview in Tokyo on June 6.

"Airbnb is growing a lot in emerging markets where consumers are price-sensitive," added, which makes Oyo appealing in terms of potential "strategic partners for the next generation of travel."

Airbnb announced in April that it was investing in the Gurgaon-based startup. The amount is undisclosed though reported to be between $150 million and $200 million. 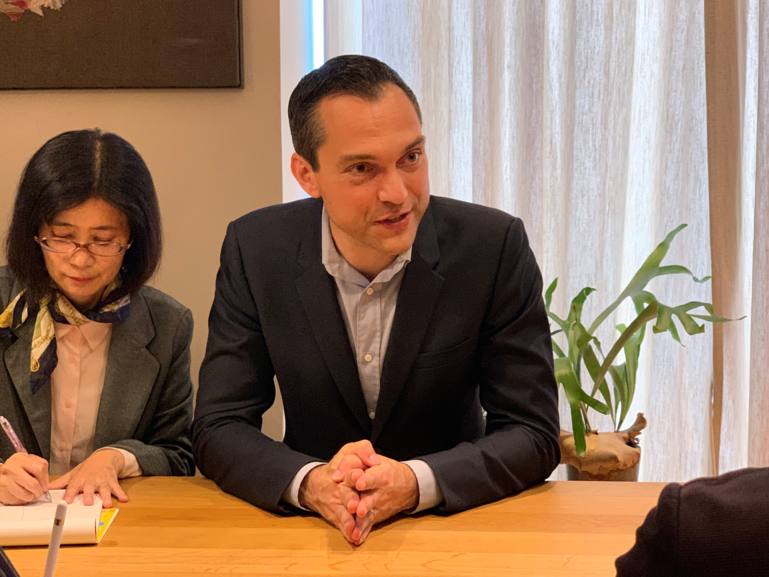 “Oyo definitely has some appeal” when it comes to “strategic partners for the next generation of travel,” said Airbnb co-founder and chief strategy officer Nathan Blecharczyk (Photo by Riho Nagao)

Oyo says it is the world's seventh-largest hotel chain in terms of the number of rooms, with sales growing 4.3 times in fiscal 2018. It oversees a network of budget hotels in more than 500 cities in 10 countries that allows owners to use Oyo's data-driven management system to boost efficiency.

Airbnb was already listing some Oyo-branded hotels in India prior to the investment. The Indian startup says it covers more than 176,000 rooms and 9,000 buildings in its home market, mainly budget offerings. Airbnb, meanwhile, has 50,000 listings in the country, focusing on relative upscale accommodations. Blecharczyk declined to comment on specific plans for their collaboration, saying only that the initial focus is on India.

"Airbnb is a deep partner for us," Ritesh Agarwal, the founder of Oyo, said during a panel discussion at a travel industry event in Singapore on May 27. "We can create more spaces and Airbnb will be able to distribute [them] better."

An Airbnb executive, however, said the U.S. company is seeking "much more than listings."

"Ahead of its IPO, Airbnb sees the hotel industry as the biggest new entry market, a large-scale industry that is compatible with home-sharing," said Kei Shibata, CEO of Venture Republic, a Japan-based operator of online travel media. In April, Airbnb also acquired HotelTonight, a last-minute hotel booking application.

In addition to mutual listings, Shibata said there is high potential for standardizing technologies between the two companies, such as a smartphone-based automatic lock system for properties. Ctrip's strategic partnership with Oyo focuses on the two companies' China business. As China's largest online travel platform has been expanding its reach to cities outside large metropolises, Oyo's 450,000 hotel rooms widespread throughout 320 cities in the country could be appealing for Ctrip.

"Oyo has a precious supply in small-tier towns, and we can make our hotel rooms more matched to Chinese customers with a partnership with Ctrip," said Agarwal in an interview in Singapore. Agarwal said Oyo has become the second-largest hotel chain by room numbers in China in the last year and a half.

The question, however, is whether Airbnb and Ctrip can maintain a close relationship with Oyo in the long term given their overlap in certain business areas.

"There is a high possibility that Airbnb and Oyo will become competitors in the future," Shibata said. "Not only is Airbnb enhancing its hotel business, but Oyo also needs to justify its high market valuation by capturing home-sharing or Western markets where Airbnb already has a high presence."

Oyo, which is valued at $5 billion, has already launched its own home-sharing operations in India and elsewhere, including Kuala Lumpur and Dubai. And in May, it announced it would acquire @Leisure Group, an Amsterdam-based home-sharing property managing company, for 360 million euros ($405 million).

Agarwal said customers have been receptive to home-sharing, which functions much like staying in a hotel in terms of check-in and other process, but is more convenient for family or group travel. He stressed that Oyo intends to expand its home-sharing business further, saying, "There are at least 100 million apartments available for vacation rental, and this is a real opportunity."

When asked about Oyo potentially becoming a rival for Airbnb, Blecharczyk said that was not an issue, at least for now. "We are definitely not concerned about competition in the near term, and there is a lot of room for complimentary collaboration," he said. "But in a long term we have very big ambitions to be a platform for the entire trip. That will take us to a lot of exciting new business opportunity."