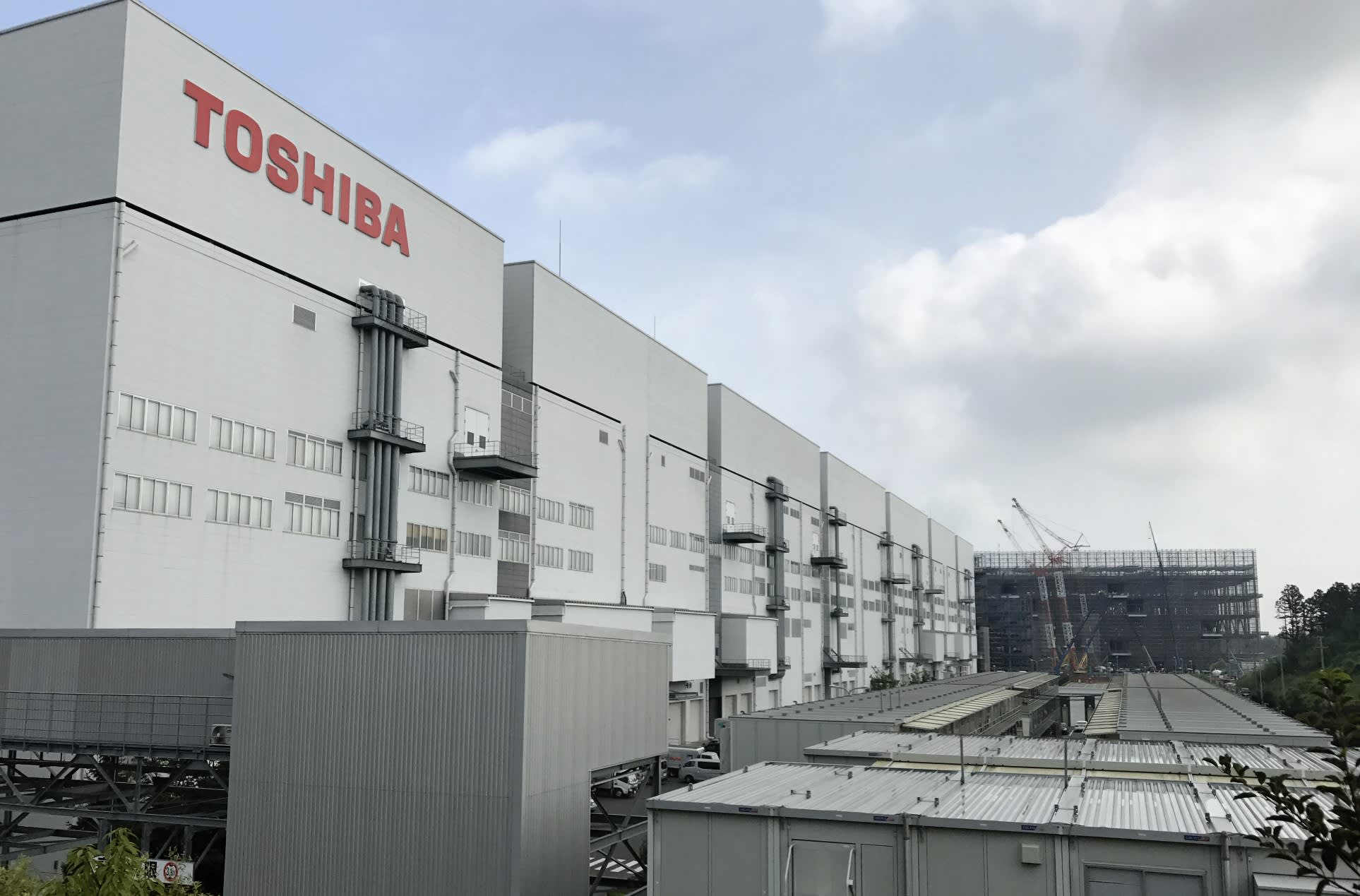 Toshiba has asked Western Digital to drop its legal actions as a condition to proceed with a joint investment in a memory chip factory in Yokkaichi, Mie Prefecture.
Business

TOKYO -- With no end to Toshiba's troubles yet in sight and efforts to sell its flash memory operations still at an impasse, much of the talent the company's future rests on is heading out the door.

Toshiba's problems began with a 2015 accounting scandal that landed the Japanese conglomerate on a Tokyo Stock Exchange watch list. Then last year, the company revealed massive losses on U.S. nuclear projects that pushed its net worth deep into the red. It is currently scrambling to sell its memory unit to fill the hole in its finances and maintain its TSE listing. The shares have already been demoted to the bourse's second section.

"Are you worried about your current company? There are places where you can be more successful."

A 40-something engineer employed at Toshiba's flagship chip fabrication facilities in Yokkaichi, Mie Prefecture, has received two contacts along these lines in recent months from unfamiliar phone numbers -- employees at a staffing agency.

He turned down the offer. But "several of my co-workers have quit between early spring and now without saying where they were going," the engineer said.

The Toshiba employee also reported seeing headhunters try to buttonhole engineers heading home from work around Yokkaichi and a chip design and development facility in Yokohama. These recruiters are out to poach Toshiba's best talent, narrowing down the list via academic conferences and talking to former colleagues who have since left the company.

Toshiba had just over 153,000 employees on a consolidated basis at the end of March. This figure dropped by around 1,000 over the following three months. Workers moving on to other companies probably accounted for much of the decline.

Toshiba employees have suffered cuts to salary and bonuses. Rivals, spotting discontent in the ranks, are dangling the prospect of better compensation. Micron Technology, which has bolstered the chip design capabilities of the former Elpida Memory's Hiroshima fab, has also ramped up hiring of engineers.

The problems at Toshiba have rippled out to a key partner as well. Western Digital unit SanDisk is also seeing an exodus of engineers.

The memory maker was acquired last year by American hard-drive manufacturer Western Digital, which originally sought to block Toshiba from selling its memory unit but is now trying to arrange a deal that would protect its interests. Negotiations have stalled amid disagreement over terms.

"The bickering over the acquisition talks has made Western Digital fertile ground, too," a recruiting agency executive noted.

Samsung Electronics has seized this opportunity to consolidate its lead. The South Korean giant's share of the global NAND flash memory market grew 2.5 percentage points on the year to 38.3% in the April-June quarter, while Toshiba's dropped 3.7 points to 16.1%. The quiet decline in the Japanese company's competitiveness could allow Samsung to dominate the memory market unchallenged.

Samsung enjoys an edge in attracting talent as well. The company now rakes in more than $20 billion in operating profit in just half a year, giving it plenty of cash to pour into research and development and lure the best and brightest. It is a wildly popular employer among South Korean science students, and it has set up a massive Silicon Valley office enabling it to draw American engineers in a wide range of fields.

Japanese companies are also getting in on the act.

Unusual ads appeared this summer at stations along a train line connecting Tokyo with the nearby city of Kawasaki, home to a key Toshiba R&D center. "You're working for that advanced manufacturer?" some read. "Then come join us."

The ads were the work of Toyota Motor, which is recruiting engineers to work on technology for self-driving cars. It apparently hoped to attract chip designers from Toshiba.

Denso has also drawn from Toshiba's ranks, as well as from Renesas Electronics, to staff a unit established just last Friday. NSITEXE will design and develop semiconductors for autonomous-driving technology.

The damage is not limited to Toshiba's chip business. Engineers are leaving the company's nuclear operations for such peers as Hitachi and Mitsubishi Heavy Industries. Though Toshiba works on domestic nuclear projects, such as reactor decommissioning, it has effectively withdrawn from the business overseas.

Back-office staffers involved in such work as business planning are also increasingly jumping ship, joining rival electronics makers and even companies in other industries.

"If restructuring takes too long, Toshiba itself will deteriorate," an alarmed source said. The company has created many trailblazing products thanks to the efforts of electrical and electronics engineering graduates from leading universities. Though it still prides itself on its top-notch engineering staff, its blunders of the last few years have put off the best of the best.

With the memory unit's sale still up in the air, employees are uncertain whether Toshiba can turn itself around. The company has devised a plan to rebuild around its social infrastructure business, but it could find itself without the talent it needs for this overhaul to succeed.