CHIBA, Japan -- Staring at the aftermath of one of the most powerful typhoons to hit Japan in recent memory, Eiichi Ubukata was left stunned.

The 61-year-old doctor was at his clinic in Chiba, just east of Tokyo, to find the entrance blocked by the downed powerlines. Typhoon Faxai, which struck on Sept. 9, had blown off roofs, brought down communication lines and left 900,000 homes without power.

But what left Ubukata -- and others in the area -- frustrated and angry was not just the scale of the storm's damage but the response by Tokyo Electric Power Co.

With another giant storm, Super Typhoon Hagibis, set to hit the Tokyo area this weekend, Tepco, as the utility company is known, may soon be in the eye of the storm again.

After the Sept. 9 typhoon, Tepco dispatched thousands of workers, including those from other power companies, to Chiba to deal with its aftermath. According to Ubukata their presence did little good.

"There were so many of them, but they were just waiting, not doing their job," he said. When he asked them to remove the power poles blocking his clinic, he said, they told him they "couldn't do anything without orders from Tepco." A resident in Tateyama, Chiba, holds up a flashlight during a blackout on Sept. 15, nearly a week after Typhoon Faxai struck.   © Kyodo

And while Tepco has more than 300 power supply cars, which can be connected to distribution lines to supply power directly to buildings, only about 100 were in use as of Sept. 16, a week after the storm hit. Meanwhile, people fell sick as temperatures topped 30 C, and hospitals were forced to run on limited supplies of backup power.

Contradictory messages added to the public outrage. The day after Typhoon Faxia hit, Tepco said it would try to fully restore electricity by the following day. Three days later, it said a full recovery would take two weeks. Speculation arose that Tepco -- in which the government owns a controlling stake -- was under intense pressure to make an announcement and reassure the public that it was responding swiftly.

Questions about climate change preparedness and how to respond best to natural disasters are likely to become only more urgent as global warming makes massive typhoons increasingly likely. Next year, Japan will host the Olympics at the start of the summer typhoon season. And this year, Typhoon Hagibis forced the cancellation of games for the first time in World Cup Rugby history.

Unfortunately, and in far more tragic circumstances, Tepco has already been here before.

In 2011 a massive earthquake and tsunami triggered the meltdown of its nuclear power station in Fukushima, causing the worst nuclear disaster in Japan's postwar history. The company was slammed for its bungled, bureaucratic response to the crisis, such as delayed and inaccurate announcements, apparent confusions in communications within the company and a lack of adequate disaster preparedness.

But the recent calamity in Chiba raised questions about how much the company has learned since Fukushima, and also its preparedness for next year's Olympic games, which are expected to draw tens of millions of visitors to Japan.

To be sure, the Fukushima disaster plunged Tepco into a long-term financial crisis, prompting a government bailout, which in turn may have impacted how it is run.

The company is still paying compensation to victims, as well the cost of decommissioning the nuclear facilities and decontaminating the affected area. In total, these costs are estimated at 22 trillion yen, of which 16 trillion is to be paid by the company. A recent ruling by the Tokyo District Court exonerating three former Tepco executives of professional negligence for failing to prevent the disaster does not change the company's financial obligations.

In 2012, the Japanese government stepped in to save Tepco from insolvency by putting it essentially under state control. While the company stayed listed, the state-funded Nuclear Damage Compensation and Decommissioning Facilitation Corp. holds 50.1% of the voting rights in Tepco. 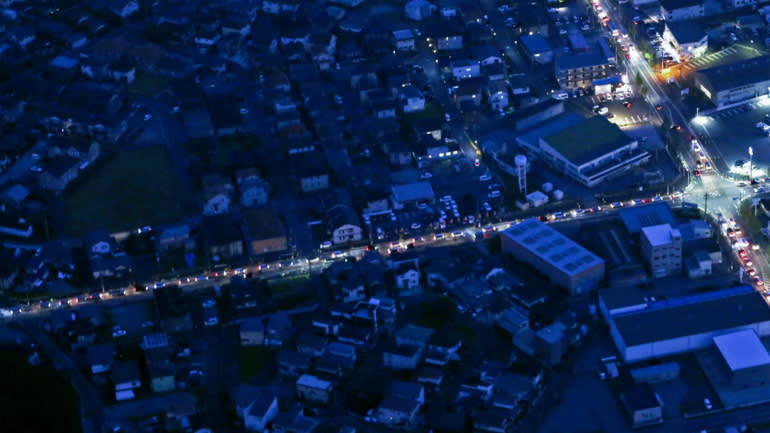 Headlights are one of the only sources of light during a blackout in Ichihara, Chiba, on Sept. 10.   © Kyodo

To minimize the burden on tax payers and utility customers, the NDF transformed Tepco by breaking up the company, reducing its costs and exposing it to competition.

Japan's utility companies previously enjoyed regional monopolies, but in 2016 the government liberalized the retail electricity market. At the same time, Tepco was turned into a holding company and its operations divided into three separate businesses: retail, power generation, and transmission and distribution.

According to Takeshi Kaneda, president of consultancy Universal Energy Research Institute, this breakup hindered investment in power transmission and distribution infrastructure, which may have worsened the impact of the typhoon in Chiba, where much of the equipment in use had been built in the 1970s.

As a result of dividing Tepco into three companies, Kaneda said, "transmission and distribution, which should spend the most money, is not profitable [enough]," because the business had limited avenues for growth.

Tepco has been trying to cut costs at Tepco Power Grid, its transmission and distribution subsidiary, to pay its Fukushima-related costs. This has been the "biggest source of profit," said Hajime Miyazawa, principal at the Mizuho Research Institute.

Power generation requires investment and has to adjust to volatile prices of fuels, while the retail business is unlikely to grow dramatically given Japan's population decline and increased competition brought on by market liberalization.

Tepco needs to earn 450 billion yen in annual net profit to pay for its Fukushima-related obligations, nearly double the 232.4 billion it earned in the fiscal year ended in March. Miyazawa suggests that there would be further industry consolidations to reduce costs. Tepco, which is dominant in the greater Tokyo area, has already partnered with Chubu Electric Power Co., which operates mainly in the Chubu area west of Tokyo, for thermal power generation businesses.

The government-backed reform of Tepco created "healthy competition between private companies," according to Miyazawa, a positive shift from the monopolies that existed before 2011. On the other hand, he added, Tepco is not a "normal listed company that can make decisions for the shareholders," especially when it comes to nuclear facilities. It has no choice but "to comply with government decisions," he said.

Tepco is counting on the restart of its nuclear power plants to bring in much-needed revenue. All of Japan's reactors were suspended, either temporarily or permanently, after the Fukushima disaster due to safety concerns. Former Tepco Chairman Tsunehisa Katsumata and two colleagues were acquitted of professional negligence regarding the company's handling of the Fukushima disaster. (Photo by Kei Higuchi)

Tepco owns a nuclear power plant in Kashiwazaki-Kariwa in Niigata Prefecture, as well as one in Aomori Prefecture that was under construction by 2011. The company is not planning to restart all seven reactors in Kashiwazaki-Kariwa, but each one that it does bring back online is expected to provide roughly 100 billion yen in profit each year.

The company originally thought it could re-start the Kashiwazaki-Karita operation in 2013, but it had a difficult time convincing the local government and residents of its credibility and the safety of its facilities.

"TEPCO didn't take responsibility of the Fukushima accident, saying it was unexpected," said one letter to the Kashiwazaki City mayor a few years ago. "Don't leave us residents to die." The No. 6 and No. 7 reactors passed safety qualifications in 2017, but their prospect for re-starting remains uncertain.

A recent scandal involving another nuclear power plant operator, Kansai Electric Power Co., will not make it any easier to restore public trust. Shortly after the Chiba typhoon, it was revealed that Kansai Electric's president and other executives had received money from a former local official of a town that hosts one of its nuclear power plants. The chairman has indicated he will resign over the scandal.

Tepco's headaches do not stop there. Government officials are once again emphasizing the need to bury electrical cables underground. Burying cables could cost 10 times what it would to install them above ground, and investment in the latter approach is usually shared by parties including the government, telecoms and utility companies.

Masakazu Kato, professor of engineering at Tokyo Denki University, said this would be an effective way to counter the impacts of typhoon, snow and lightning, as well as earthquakes outside of reclaimed land areas, which are susceptible to liquefaction.

In Tokyo, only about 5% of utility poles are underground, according to the transport ministry. Large-scale construction works have been difficult because of Japan's narrow roads and regulations that prevent blocking roads during the day, Kaneda said.

Tepco did not mention underground facilities when Nikkei Asian Review asked about what measure it was taking to prepare for natural disasters. "For electrical poles and transmission-transformation facilities, we are undertaking relevant replacements based on checkup results," it said in a statement. The company was circumspect regarding its response to the recent typhoon, saying only, "first, we need to evaluate the scale and state of the damaged facilities."

Nevertheless, Kato believes Tokyo's power infrastructure is ready for the Olympics next year. Most power transmission and transformer facilities for large buildings and condominiums are underground, he said.

Tepco also has its defenders in other respects. The company has received criticism over its decisions and communication with other players during crises, but Yoh Yasuda, project professor of renewable energy economics at Kyoto University, says governments should share the blame.

"The decision-making role should be taken by the prefectural government, the national government or both," Yoh said. "It would be quite difficult for a private company facing great uncertainty due to a lack of information to make such decisions on its own." He added that given the circumstances, Tepco's response to the typhoon was all that could be expected.

"More coordinated preparation will be needed" ahead of the Olympics, Yoh said, for both natural disasters and other possible emergencies, such as acts of terrorism. He suggested that the coordinated activities such as to remove fallen trees, provide food and secure evacuation shelters would be important.

"Irrelevant criticism of utilities could end up turning them into a scapegoat that distracts public attention away from essential matters like investigating causes and preventing a recurrence," he warned.