US medical-needs supplier ready to expand in Asia

NEW YORK -- Cardinal Health of the U.S. is getting ready to expand in Asia. The company's $100 billion in sales come from supplying pharmaceuticals and medical devices in the U.S. Its Asian footprint has been relatively small. In a recent interview with The Nikkei, Donald Casey, chief executive of Cardinal Health's medical segment, explained how the recent acquisition of the Cordis, a medical device maker, from Johnson & Johnson can be a game changer. He also discussed the potential Japan, China and other graying Asian nations hold for the company.

Q: In October, Cardinal Health completed its acquisition of Cordis, an interventional cardiology and endovascular medical products maker. Under Johnson & Johnson, Cordis grew relatively slowly. How will you accelerate growth? A: First, we can invest and drive a much faster pace of innovation, because it is a much higher priority within Cardinal than it was at Johnson & Johnson. They have been focusing on the categories where they are either the largest or the second largest competitor. Because the interventional cardiology space did not rise up as one of their biggest priorities, they had not been investing on innovation in the specific interventional cardiology or the endovascular categories. We believe this area will be a significant priority for Cardinal Health.

The way interventional cardiology and endovascular products are sold, marketed and brought into the operating room could be dramatically improved by changing the logistics. We believe that we will bring a much more sophisticated approach to logistics and information management that will allow us to be innovative on the business model.

Q: Could you give us examples of business model innovations for Cordis?

A: The most important service we will begin to market with Cordis products around the world is going to be what we call the Cardinal Health Inventory Management System (CIMS), which, at heart, is an RFID tracking system that will allow us to be dramatically more efficient from an inventory perspective. 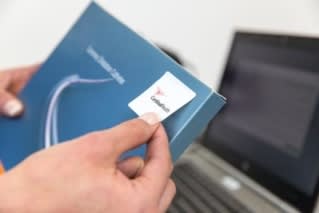 RFID tags like this one can be applied to devices for inventory management purposes. (Courtesy of Cardinal Health)

About two years ago, we bought a company which allows you to put a very inexpensive RFID tag which will identify the product, the expiration date, manufacturer and other things. We believe it will eliminate "lost product" problems; it also eliminates products that may be in a hospital that has dating (expiration) issues.

Not only will inventory be more efficient, but you can begin to go in with the physicians and the hospitals and look at their ordering patterns, and help them become more efficient. Over time we hope to begin linking the products used with patients' outcomes. We believe that the information that this smart distribution system provides is the foundation of a very different business model.

A: Yes. At a deli in New York there's a good chance that that inventory would be replaced in a matter of days if not hours. Across medical devices, historically, it's a very high number of SKUs [stock-keeping units] per category, because you're not sure what exactly you're going to need until you're actually operating on the patient. That's why you need all these SKUs. And because of all the SKUs, there's a tremendous amount of inventory. It's not just interventional cardiology; it is also for orthopedics, almost across any medical device arena. It is a problem across the entire world, because the amount of SKUs and how they are distributed is a relatively inefficient system.

[CIMS] is already in the U.S., Canada and multiple countries in Europe. We tend to see an improvement of about 15-20% in terms of reduction in inventory, reduction in lost product and reduction in dated product. It is very significant, particularly when you are talking about interventional cardiology or endovascular products, which tend to be relatively expensive.

Q: What is your timeline to bring the system to Asian countries?

A: We have been building and trialing the system in Asia, particularly in China, and now that we have a significant interest in Cordis, look forward to bringing it into Japan.

For Cordis, 70% of sales are outside of the U.S. About a third of the business is in Asia. Now that we have a much broader footprint within all of Asia, we look forward to launching as quickly as we can. Over the course of the next year, as part of our general Cordis offering in China, Korea, Japan, Australia, and New Zealand, we would look to see that this will become foundational.

Over the next 12 months, we will be working with partners to begin to expand with key physicians and hospitals throughout the region. It will be building on tests we have done which demonstrated some efficiency in different countries around the world. Q: Are you planning to distribute other Cardinal Health products with CIMS?

A: The new distribution system is mainly for Cordis product. We do not sell as many Cardinal Health products outside the U.S. as we would like to, so one of the opportunities we have with Cordis' significant global presence is to increase the amount of other Cardinal-branded products that we sell outside the U.S. Right now it will be principally Cordis, but over time we hope to apply CIMS broadly.

Q: Could you tell me how much you plan to invest in Asia?

A: We do not break out our specific investment by region, but we spent close to $2 billion buying Cordis. A lot of the growth in the Cordis franchise has come out of Asia, so we believe we will be investing heavily in that area. We will be investing on both the product innovation side and the CIMS side.

Q: Tell me about research and development. Are you interested in developing products specifically for Asia?

A: Cordis tended to rely on more internal development efforts. Our model going forward will rely on both internal development and external partnership. Over time we also will look to invest in partners that have capabilities of doing R&D for global products. While internal innovation will be mostly in California, we believe the emerging model in this space will include a lot of startup and new companies in Asia, Europe and North America. I believe there is an opportunity to create faster growth by tailoring some of these products to a specific region.

Q: Will you be looking for local partners in other areas as well?

A: Yes, in R&D and manufacturing, as well as the go-to-market space [the selling, physician partnering, and professional education portion]. We'll work with more than one partner. Cardinal Health is interested in having a partner in Japan, specifically. Japan is a very unique market; their physicians have very specific preferences on what products they use. It is one of our highest priorities to build on the strong business we have in Japan today. We want to find the right partners as soon as possible.

Q: What is your goal for growth in the region?

A: Unfortunately, in Japan the population is aging quickly, and China has historically been underserved. We believe that there is an opportunity to see significant growth in both countries over the next year. We expect the Asia business to be our fastest-growing. Historically, the global interventional cardiology business has been growing at low single digits. We would expect to exceed that.