US tariff on China reroutes Meidensha's production of grid parts TOKYO -- Electric appliances producer Meidensha will move manufacturing of power grid equipment to the U.S. from China to expand sales in the country while avoiding a heavy tax levied on Chinese-made goods amid the trade war.

Meidensha already has begun production of vacuum circuit breakers with Japanese-made parts in the state of South Carolina, and shipments are slated to start in February.

The company previously shipped semifinished circuit breakers made in Shanghai to U.S. customers, which added parts for sale to distributors of grid equipment. The vacuum circuit breaker is a switch designed to protect an electrical circuit against damage caused by excess current from an overload or short circuit.

The manufacturing shift comes as President-elect Joe Biden is expected to maintain Washington's tough stance on China. Meidensha will recalibrate its production network to cope with continuing trade tensions between the two countries.

The U.S. announced higher tariffs on Chinese goods in June 2018, with the levy on vacuum circuit breakers rising to 27% from 2% in July that year, pushing Meidensha to consider calibrating a response. 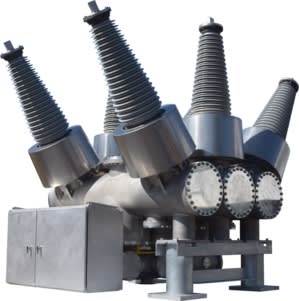 Meidensha's move follows those by compatriots Kyocera and Ricoh, which shifted production bases from China to Southeast Asia for products sold in the U.S.

"In addition to dealing with the tariffs, we have to think about the impact of the coronavirus becoming protracted," President Takeshi Miida said. "We will prepare for the risk to the supply chain by diversifying our bases."

Research firm Global Market Insights estimated the worldwide power transmission and distribution equipment market at $100 billion in 2019. A subsidiary of Hitachi is the biggest supplier, controlling 9% of the global market, followed by Siemens and General Electric.