TOKYO -- Japanese sanitary goods maker Unicharm was one of the early birds in Asia and benefited immensely from the region's growth. But crucial miscalculations have caused the company to hemorrhage market share to rivals in the key markets of Indonesia and China.

President and CEO Takahisa Takahara said the company should have responded sooner to the changes that began sweeping the region's markets in 2013.

For starters, Unicharm did not anticipate that its Japanese rivals would launch huge pushes in emerging Asia, betting on high economic growth.

Two years ago, Kao and Daio Paper started building plants in Indonesia, where Unicharm has long dominated the disposable diaper market. Today, Unicharm's market share is below 60%, down from nearly 70%.

When the company entered Indonesia in 1997, the country's nominal gross domestic product per capita was $1,308 and disposable paper diaper use was still low. The company expanded its sales network by pitching inexpensive products door to door on small islands. It eventually controlled an overwhelming share of the market and enjoyed operating profit margins of nearly 20%. 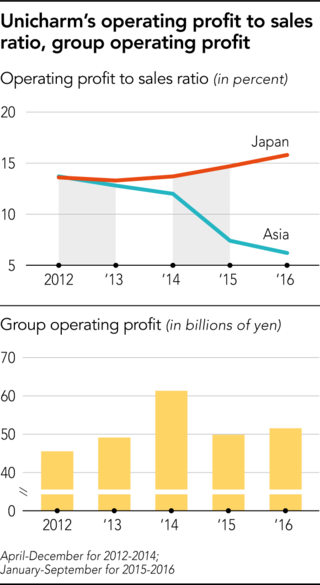 Indonesia's economic ascent worked in Unicharm's favor for years, but there came a point when the country's growing wealth began working against the company. In 2015, nominal GDP per capita rose to $3,362. In urban areas, it easily surpassed $5,000 -- the threshold at which diaper use is generally considered to become widespread.

The company fought back by introducing diapers with improved absorption capabilities in the second half of this year. But that required disposing of lot of old products -- a costly undertaking for a company with such a large market share. The upshot is that Unicharm's Indonesian diaper operations are expected to post an operating loss in the current fiscal year through December.

The company has also suffered setbacks in China, where it has been wrong-footed by the rise of cross-border e-commerce.

Unicharm entered the country in 1995, two years before it ventured into Indonesia. Rather than play up its Japaneseness, its strategy was to focus on "local production for local consumption."

While that worked in the early days, Chinese tastes have changed as the country has grown more prosperous. With the growing preference there for high-end products and the rapid spread of e-commerce, high-quality Japanese diapers have become more popular, said Masashi Mori, an analyst at Credit Suisse Securities (Japan). Today, roughly half of all diaper purchases in China are made online, and Unicharm's market share has fallen to 8%, half of what it was three years ago.

Hoping to boost its brand image in China, the company took special action during the country's Singles' Day e-commerce extravaganza on Nov. 11. It was selling packs of its Moony brand diapers, in size large, for 70 yuan ($10.17), undercutting all the major players. It offered the product as a loss-leader because it wanted local consumers to know that it had high-quality diapers.

For the January-September period, Unicharm's operating profit ratio in Asia was 6%, down from a peak of well over 10% and far below its domestic figure of 16%. Although the company is forecasting group operating profit to rise 4% on the year to 83 billion yen ($728 million) for the current fiscal year through December, some market watchers expect the company to post its first profit decline since the fiscal year ended March 2005, excluding when the accounting period was changed.

To improve its performance in Asia, the company plans to employ its tried and true strategies in such emerging markets as India, the Middle East and Africa, where paper diaper use is still not widespread. In China and Indonesia, Unicharm plans to claw back market share by offering higher-end products. It also plans to sell top-end diapers on cross-border e-commerce sites operated by China's Alibaba Group Holding.

Takahara is optimistic. After all, it was he who nurtured Asia into a huge revenue source that helped Unicharm expand its market capitalization more than fivefold. His management savvy is highly regarded by the market, as reflected by the company's high price-earnings ratio of 34 based on Thursday's closing price of 2,428 yen. By contrast, Kao's is just 22.