TOKYO -- Online clothing retailer Zozo, once one of Japan's fastest-growing e-commerce startups, on Thursday forecast the first profit decline in its history and said it is reviewing ambitious plans to sell custom-fit clothes.

The company led by high-profile billionaire Yusaku Maezawa -- whom SpaceX picked as its first customer for a moon voyage -- has been hit by disappointing sales of the private-label clothing brand, which it had positioned as a tool for overseas expansion.

Zozo downgraded its net profit forecast for the fiscal year ending March 2019 by more than a third to 17.8 billion yen ($164 million), which marks a 12% year-on-year decline. Sales are now forecast to rise 20% to 118 billion yen, down from an earlier estimate of 147 billion yen.

Private-brand sales for the year ending in March are now expected to reach 3 billion yen, only 15% of the original target. The segment is expected to turn a loss of 12.5 billion yen. The company last year announced an ambitious target to sell 20 billion yen of the new apparel brand.

"This was a lesson bought at a high price," Maezawa, the founder and CEO, said of the downgrades at an earnings briefing.

To achieve a custom fit, customers use a special app to take photos of themselves wearing stretchy, polka-dot bodysuits that take their sizes.

Maezawa said the company is "reviewing the private-brand business" and now aims for it to break even next year by scaling down distribution of the polka-dot Zozosuits and trimming investments in factories and technology.

The CEO stressed that he still wants the private brand eventually to become "a business that surpasses the profitability of Zozotown," the retailer's mainstay online marketplace, and he said the company will invest again in some products and technologies. For now, Maezawa said he "changed the order of things." 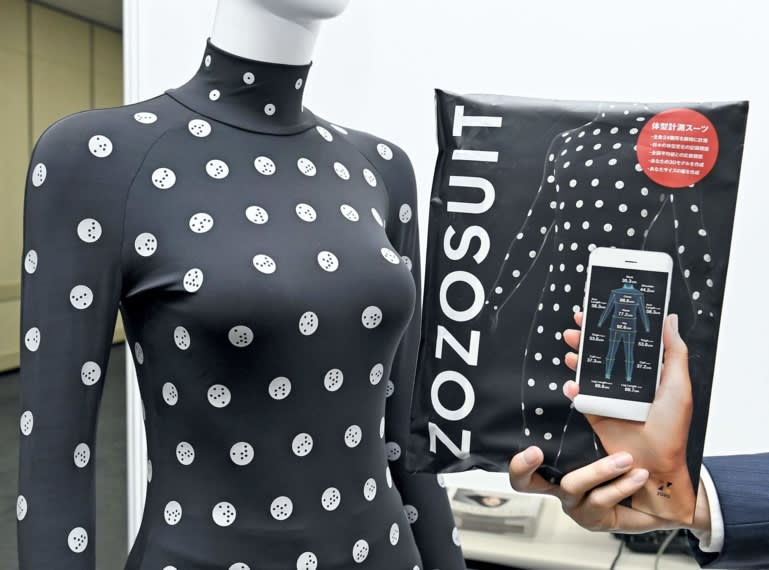 Zozosuits, which the company distributes for free, let customers take their own measurements with a special app to order custom-fit clothes. (Photo by Keiichiro Sato)

While Maezawa recently attracted attention by giving out a total of 100 million yen of his own money to ordinary people on Twitter, returns to Zozo investors are going down. The dividend forecast was cut to 24 yen per share, down 5 yen from a year earlier.

Zozo's shares have plunged by more than 50% since the peak in July 2018. Analysts have slashed the previously high expectations for the private brand, while industry peers like Uniqlo parent Fast Retailing have expressed skepticism of Zozo's ability to build a manufacturing base.

Zozo's private brand has suffered from production troubles and miscalculations about customer behavior. "There were various problems such as with providing the perfect size and sewing quality," Maezawa said in an analyst meeting. Fewer people than expected used the free Zozosuits to take their measurements, he added.

A Tokyo resident in his 40s, who ordered a Zozo business suit in September, complained that he still has not been able to wear it four months later. He received the product in December but had to return it because it did not fit. Now it will take until February for the resized suit to arrive.

Dairo Murata, senior analyst at J.P. Morgan Securities Japan, noted that the company still possesses healthy finances. Zozotown, which accounts for 96% of the total gross merchandise value -- a measure of sales -- will still grow because of rising internet commerce in Japan. However, "there is no growth strategy for the mid- and long term" with the private brand failing as a growth driver, Murata said.

Zozo's latest effort to aid the growth of Zozotown was ZozoArigato, a subscription system in which customers pay up to 540 yen per month in return for a 10% discount at all times. Another analyst said this represents a shift in that "Zozo now needs to compromise its profitability to increase customers."

The system was launched to "increase the number of strong Zozo fans," Maezawa said. It is important to convince customers of the convenience of shopping for clothes online, he said, even if the effort cuts into profit.