TOKYO -- Uniqlo owner Fast Retailing on Thursday stressed that the company does not use any materials linked to human rights violations in the supply chain amid rising concerns over forced labor in China's Xinjiang region.

Chief Financial Officer Takeshi Okazaki spoke to the media after the apparel maker posted a net profit of 151 billion yen ($1.38 billion) for the first nine months of this fiscal year, up 67% from a year ago.

French prosecutors are investigating Fast Retailing and other global apparel makers for alleged crimes against humanity in Xinjiang, according to local media reports. On Wednesday, the U.S. Senate passed legislation to ban the import of products from Xinjiang, where U.S. officials say Uyghurs and other Muslim groups face ongoing genocide.

Okazaki said, however, that French authorities had not contacted the company. "If there is such an investigation, we will fully cooperate with it and hope that they would understand how sincerely we are working on the human rights issues in our own supply chain," he said.

Okazaki said Fast Retailing had acknowledged the human rights issue as the "most important business challenge." He stressed: "We have made effort and led the industry to improve the situation." 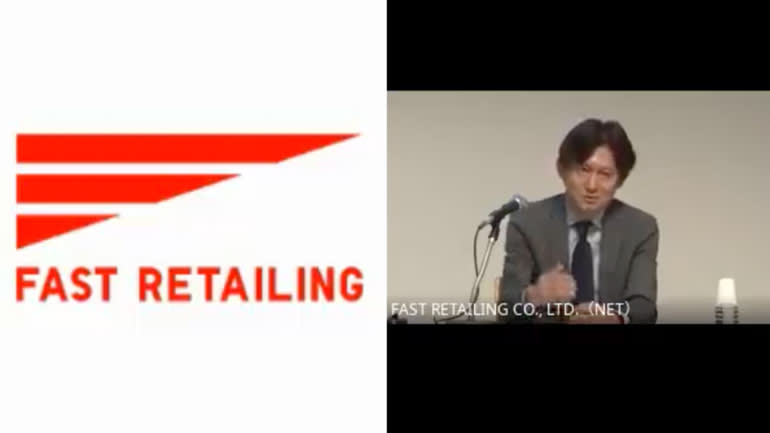 Chief Financial Officer Takeshi Okazaki says the company does not use any materials linked to human rights violations in the supply chain. (Screenshot from Fast Retailing's Google Meet page)

In May, it was found that a shipment of shirts for the Uniqlo casualwear chain was blocked from entering the U.S. in January on suspicion they were made with forced labor in Xinjiang. Uniqlo said that those shirts were made from cotton produced in the U.S., Australia, and Brazil and put together in factories in China.

Okazaki said that the January ban by the U.S. had little impact on its business. "We understand we should follow the restrictions in the U.S. but we demand transparency in procedures and clear criteria," he added.

In the nine-month period to the end of May, the group's consolidated revenue rose 9.9% to 1.69 trillion yen mainly due to strong results in Japan and greater China. Fast Retailing posted a 72% rise in its operating profit to 227 billion yen.

Fast Retailing slightly lowered its forecast for the 12 months ending in August. It now expects revenue to increase 7% from the previous fiscal year to 2.15 trillion yen, and operating profit to rise 64% to 245 billion yen. Previously, the forecasts were 2.21 trillion yen and 255 billion yen, respectively.

But Fast Retailing said recent performance in Japan and China fell below its expectations.

In China, consumers have been willing to pay more for travel than clothes, said Okazaki. But overall sales in the region for the full year are expected to rise significantly to exceed the level reached before the pandemic.

"We do not worry about consumption in China. We will continue to meet customer needs. While local brands are getting more attractive, we have to think about how we differentiate our products from others," he added.