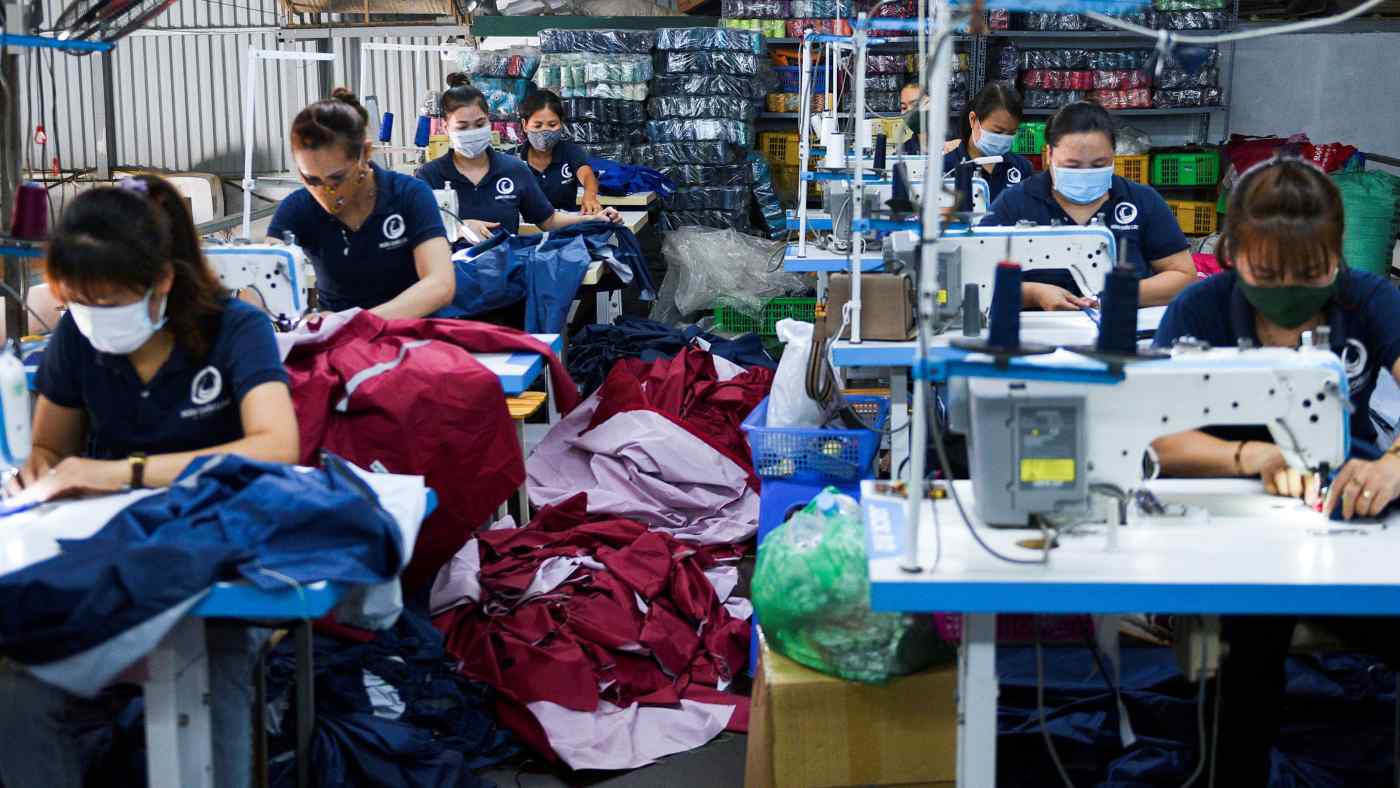 HO CHI MINH CITY/TAIPEI -- Vietnam's slow reopening this past week was bittersweet for Stanley Furniture, which had been in COVID lockdown along with thousands of other manufacturers, from Netflix supplier ASRock to shoe giant Pou Chen. On the one hand, Stanley employees were glad to go back to making desks and drawers. On the other, their goods are stuck in storage because global shipping costs skyrocketed.

That is just one of many risks hanging over the fragile supply chain even after Ho Chi Minh City and surrounding provinces on Friday lifted a bruising pandemic shutdown. Other risks include a labor shortage exceeding 100,000 workers, fresh lockdowns if coronavirus spreads, investors shifting to China and elsewhere, and the financial cost of COVID safeguards.

Stanley Furniture reopened its facilities in one of the affected provinces, Binh Duong, yet it cannot take full advantage of the work-from-home market that has fueled orders for Vietnam's wood and electronics exports.

"There's tremendous demand for our furniture, but we can't ship anything," Chairman Walter Blocker said in an interview. "The problem is congested ports in Long Beach [California] and across the world."

Besides transport snarls, Vietnam's industrial south is trying to bounce back from a lockdown that forced laborers to sleep at work, delayed production of iPhones and Puma shoes, and shrank the economy at a record pace. For companies emerging from hibernation, the lifting of the restrictions was the first good news they had received in months. 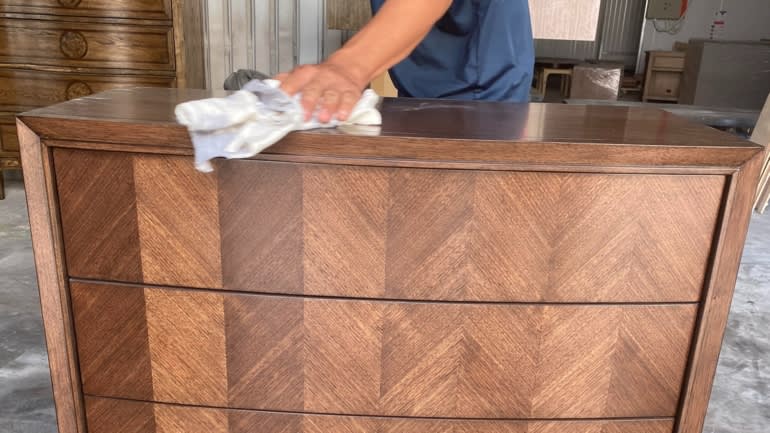 An employee wipes down a dresser at Stanley Furniture's factory in Binh Duong province in southern Vietnam, which is emerging from a brutal shutdown that rippled through global supply chains.   © Stanley Furniture

Nike, fashion brand Everlane and Walmart are poised to benefit as production resumes in and around Ho Chi Minh City, which said on Monday that in three days 5,279 companies had registered to reopen.

ASRock, a supplier of motherboards and servers owned by iPhone assembler Pegatron, said it had shifted some orders to China and Taiwan. But its contractor in southern Vietnam is working on a plan to reopen.

"Recently, we have been allowed to enter the factory to arrange shipments for the finished and half-finished goods that were made before the lockdown," an ASRock representative told Nikkei Asia. "But it is still hard for our contract manufacturer to restart production lines there for the time being."

Adidas and Nike supplier Pou Chen told Nikkei that it finally got the green light to resume operations on Wednesday in Ho Chi Minh City, where it employs 56,000. The world's biggest contract shoemaker took a hit to output and revenue last quarter after halting work in Vietnam in mid-July, according to a stock exchange filing.

"At first, we don't expect a full resumption, but the production will pick up slowly and gradually," a Pou Chen representative said, adding that, to return to work, Vietnamese staff must have had at least one vaccine dose and live in an uninfected area.

The rebound from disruptions in Vietnam, a top source for phones and apparel, will ripple around the world, especially as multinationals hope "to ramp up manufacturing capacity into the year-end holiday season," DBS said in a research note.

The shutdown impacted the U.S., Vietnam's biggest export market, to such an extent that concerns about Vietnam's supply chain were raised twice in August, first at a White House press briefing and then when Vice President Kamala Harris met Vietnamese leaders in Hanoi. The U.S. embassy in Hanoi would not elaborate on the supply chain discussions when asked for comment.

U.S. buyers from Crocs to Hooker Furniture to Urban Outfitters were among those hit after COVID swept industrial parks in Vietnam's southern business hub. The region has since tamped down infections and expanded vaccinations.

That is allowing Everlane to source goods again. The apparel company said it will "benefit greatly" as four large vendors gradually come back online.

"We expect by next week that factories will be between 10-60% operational and to have each week improve," chief supply chain officer Kimberley Smith told Nikkei. 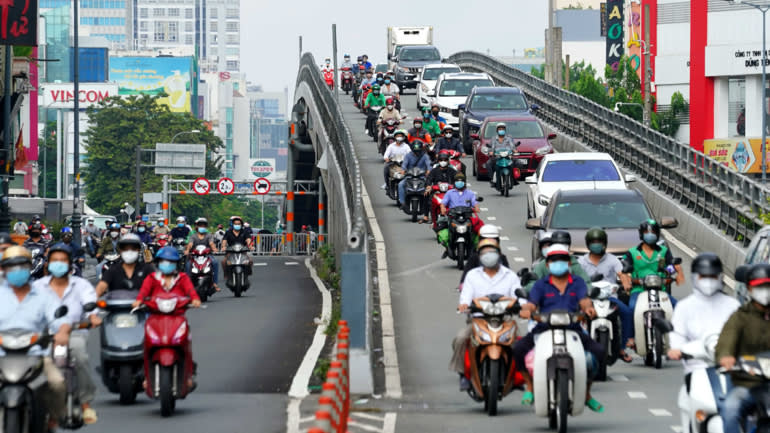 A Ho Chi Minh City street is congested with motorbikes on Oct. 1, when jobless factory workers decided en masse to migrate back to their hometowns. (Photo by Nguyen Doc Lap)

Besides worker scarcity, Chu said this mass migration could trigger a rise in virus cases in the provinces. Will authorities invoke lockdowns again if the caseload explodes? That is a worry that also may keep job-seekers from returning to economic zones, he said.

"If now they have to come back to factories to work, then what happens to the kids?" he said by phone, noting that schools are closed.

In recent years, China has lost cost-cutting investors to Vietnam, though the Southeast Asian country's summer shutdown forced a small reversal in the trend. Companies that said they have diverted some orders back to China include ASRock, bean bag maker Lovesac and protective clothes brand Lakeland.

More broadly, 20% of businesses moved some production out of Vietnam and 16% were discussing relocation, the American Chamber of Commerce in Vietnam said in an August survey.

"I talked to one CEO who shared with me that he had six years of supply chain work they undid in six days," business news site Quartz quoted a footwear executive as saying of Vietnam.

Supply chains were undone by one of the world's strictest lockdowns, which barred travel between certain provinces and required many plants to close unless staff slept on site. Ho Chi Minh City said some companies have continued the sleepovers, though the number of affected workers has fallen to 45,000.

Even without overnight requirements now, the recovery hangs in the balance as businesses navigate still-changing rules, Chu said.

Makalot Industrial, a leading garment maker for Gap and Walmart, told Nikkei its reopening on the edge of Ho Chi Minh City hinges on vaccinations. Just 20% of its workforce was fully inoculated.

But nearby in the sparser delta province of Vinh Long, Makalot production is at 30% capacity, with hopes of surpassing 80% by the end of the month. Also boosting progress: Makalot said it began recruitment a month ago in anticipation of the recovery and the labor shortage.

With loosening restrictions putting southern Vietnam's economy on the cusp of a revival, at least three research analysts this week posited that the worst is over.

Some investors, such as Panasonic, were already plowing ahead. The Japanese company told Nikkei that COVID has not altered its plans to debut a plant for ceiling and ventilation fans in Binh Duong next week, further cementing its shift from Thailand to Vietnam as a Southeast Asian appliance hub.

Others are seeing pandemic limitations ebb, such as Eclat Textile, a key supplier to Under Armor, Nike, and many other brands.

"During the past few months, we did not fully shut down our production but we needed to significantly reduce our production in our factories in Vietnam," Eclat Vice President Roger Lo told Nikkei. Now "we see things improving. One of our production sites has received approval to increase production from 30% in the lockdown period to 60% starting in October."

That's in line with the phased comeback at the Saigon Hi-Tech Park, where an official said factories were operating at 30% to 50% of capacity last month, which should rise to 60% to 70% this month and further in November. The zone reportedly accounts for nearly a third of the city's exports.

Many say Vietnam is still attractive to long-term investors. But in the short term, Chu said, how officials respond to each new development during the recovery will be pivotal.

"The role of government," he said, "is very important now."