From medicine to cars, property developer muscles into ever more sectors HANOI -- Vietnamese property developer Vingroup is fast becoming one of the country's most diverse conglomerates, even as it still relies on the real estate business for the bulk of its sales.

The company in early April announced its entry into the pharmaceuticals market, with plans to start building a plant this summer. Earlier, in March, it announced the acquisition of a feed company and plans for setting up a university. Its automobile manufacturing venture is moving forward with engineer training and international tie-ups.

For the Vietnamese economy, the rise of giants like Vingroup is driving growth and industrialization. But it is also a case of the rich getting richer, while smaller businesses often struggle to find their place, raising questions about sustainable growth.

Vingroup's real estate operations generated 70% of its total sales last year, but the company is reaching far beyond its roots. With its pharmaceuticals brand Vinfa, the company plans to sell traditional Vietnamese herbal medicines while also handling Western drugs through partnerships with European, American and Australian players. The planned factory and research facility, to be located in the northern province of Bac Ninh, will entail a $97.7 million investment. Construction of the first phase of the 10-hectare development is to start in July at the earliest.

Apart from pharmaceuticals, Vingroup is moving into production of health food and supplements, to be sold at its Vinmart supermarkets and Vinmart Plus convenience stores. The company sees a chance to capitalize on increased health consciousness among Vietnamese consumers.

Vingroup made its bet on animal feed through organic farming subsidiary VinEco, acquiring a 60% stake in local company Viet Thang Feed. Around the same time, the conglomerate announced it would join the higher education market by opening a school called VinUni University. On April 3, Vingroup signed a strategic cooperation agreement with U.S. based Cornell University and the University of Pennsylvania, paving the way to offer education up to global standards. 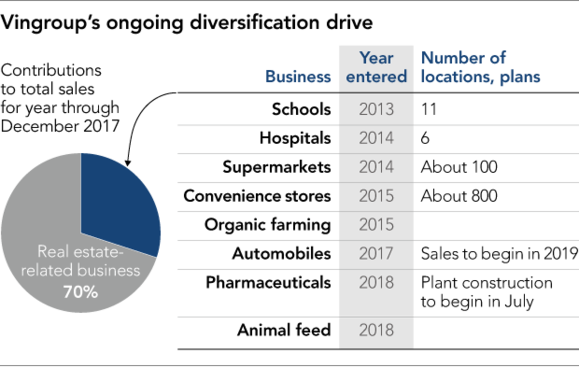 Vinschool, the company's education business, has been offering elementary and secondary schooling since 2013. Establishing a university has been a prized goal. VinUni University is to have three departments -- business, industrial technology and health sciences -- and the group hopes for synergies with the Vinmec hospital arm it created in 2014.

The group's entry into the auto industry, announced last September with the support of the government, was met with serious skepticism due to the still-nascent state of domestic supply chains. Yet the VinFast project looks to be proceeding well: In January, the company bought a license from BMW to use proprietary manufacturing technology.

The details of the arrangement remain unclear, including the sum paid, but Vingroup appears set to absorb knowledge from a global automaker. Some Japanese industry executives believe the license may relate, in part, to key components like suspensions and engines.

As part of its push into the car business, Vingroup established a technical training center in the special economic zone of Hai Phong in early February. It is to become operational in August. The two-and-a-half-year program will offer two streams for electronics and industrial machinery training, including coursework and internships.

The plan is to accept 200 trainees by the end of its first fiscal year. Upon completion of the course, students will have certified skills equivalent to those needed for a German factory, thanks to cooperation with the German Chamber of Commerce and Industry.

VinFast is to start out producing electric motorcycles, due for release in the July-September quarter of 2018. In that quarter of 2019, the company intends to roll out Vietnam's first two "national car" models, a sedan and an SUV. If all goes according to plan, this would bring Vietnam closer to the government's publicized goal of national industrialization by 2020.

Vingroup has come a long way from its beginnings as a small real estate company in 2001. Now a giant corporation, it is powering the economy alongside the likes of VietJet Air owner Sovico Holdings and real estate company FLC Group -- and helping to offset the slow privatization of state-owned enterprises.

The families behind these conglomerates are reaping the rewards. The total assets of the top 10 wealthiest owners of publicly traded companies were worth about 270.8 trillion dong ($12 billion) at the end of 2017, according to local newspaper Vietnam News, up 2.8 times from 96 trillion dong a year earlier. Vingroup's family topped the list, followed by those behind Sovico, FLC and steelmaker Hoa Phat Group.

Many rich-listers leverage political connections as they expand their businesses. This leads to powerful companies generating more and more wealth. On the flip side, however, newer ventures appear to be left in the cold, struggling to raise funds and find talent.