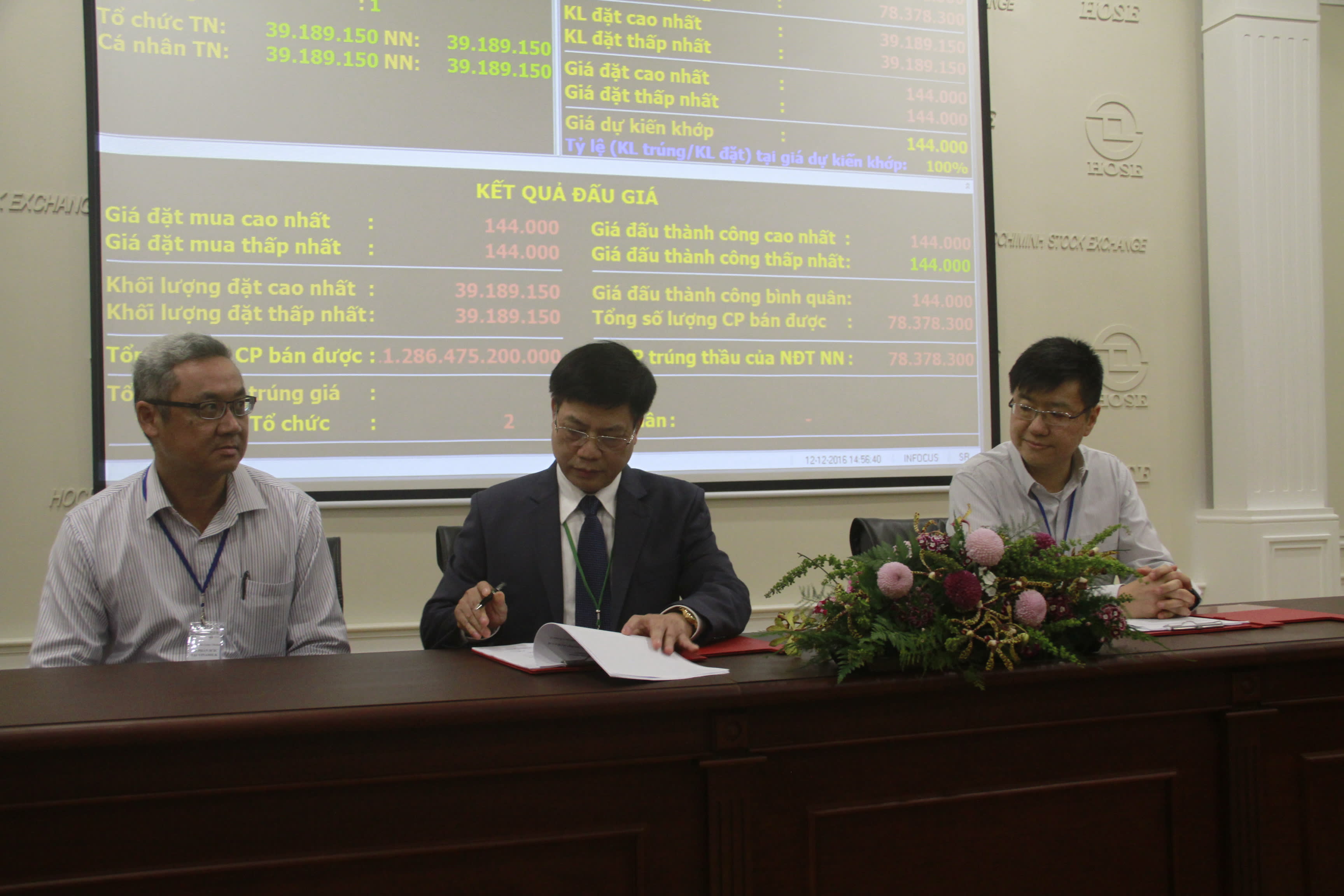 Representatives from Fraser and Neave in Singapore sign a contract after winning 5.4% of the 9% stake offered at the first Vinamilk auction in December 2016. (Photo by Kim Dung Tong)
October 18, 2017 12:38 JST | Vietnam
CopyCopied

SCIC Chairman Nguyen Duc Chi told reporters at a press conference in Hanoi on Monday that the company had carried out roadshows in Hong Kong and Singapore and discussed the stake sale with more than 30 investors from those markets.

Another roadshow will be held at the Ho Chi Minh City Stock Exchange on Wednesday, Oct. 18, to provide information about Vinamilk and the share auction process.

According to SCIC, this auction will be simpler than the first one in December 2016, when Singaporean-based Fraser and Neave, a unit of Thai Beverage, acquired 5.4% of Vinamilk through two subsidiaries that each reached the 2.7% individual bidder limit.

SCIC plans to announce the specific regulations around the sale of the shares by Oct. 21, and expects to set the offer price and receive deposits from the beginning of November.

Last month, SCIC announced the sale of a 3.33% stake in Vinamilk, with the aim of raising more than $280 million for government coffers. SCIC currently owns 39% of the dairy. UBS AG Singapore and Saigon Securities are advising on the sale. Domestic sales grew over 10% year-on-year, but export turnover slowed due to continued strife in Iraq, Vinamilk's largest export market. The dairy is aiming for 51 trillion dong in revenue and 9.73 trillion dong in net profit for 2017.

Vinamilk shares closed at 148,600 dong apiece on Monday, down 0.5% from the previous session.

Market observers said Vietnam's government was pushing divestment plans from the country's most valuable companies, including Vinamilk and the two leading brewers Sabeco and Habeco, in order to collect funds for the national budget during the fourth quarter.

Vietnam's premier last week asked the Ministry of Industry and Trade to file its divestment plans for the two brewers by Nov. 20, in order to start the withdrawal process by the end of the year.

Potential buyers have been showing their interest in the two companies, but have complained about the high prices of the two brewers' stocks. Sabeco and Habeco shares closed at 272,000 dong and 117,800 dong apiece on Monday, respectively, the 1st and 8th highest priced stocks on the Ho Chi Minh City bourse.

*Correction: A previous version of this story indicated the auction date would be Nov. 11. It is Nov. 10.