"Users of Metfone in Cambodia, Unitel in Laos and Viettel in Vietnam will be charged at the local mobile fee when they make cross-border calls to each other," said Nguyen Manh Hung, Viettel's managing director, who regards the three countries as an economic and cultural bloc. 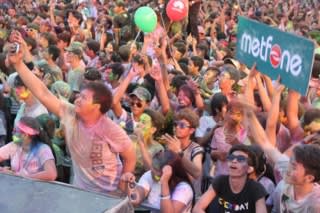 Metfone has 5.5 million Cambodian users and 37% of the market.

Discussions about free roaming services started years ago in Australia, Europe, and New Zealand, but without bearing fruit. Free roaming within the Association of Southeast Asian Nations has also been discussed by regional ministers since 2013.

Viettel has well-established infrastructure in the three countries, and is the first telecom to launch such a service within a regional economic bloc, promising cheaper cross-border rates for calls and data.

In a statement released on Thursday, Viettel said it expected its individual operators to lose some revenue initially with the reduced charges, but provided no figures. The figure could be 2% according to one Europe model in 2013. Viettel expects users to become more active when they travel if they can continue paying domestic rates.

As of September 2016, Viettel had 90 million customers, of which 26 million were in nine overseas markets: Burundi, Cambodia, Cameroon, Haiti, Laos, Mozambique, Peru, Tanzania, and Timor Leste. Viettel has targeted 25 countries by 2020. Unitel is Laos's top brand, and has nearly half the country's mobile market.

Cambodia and Laos were Viettel's first foreign ventures, and remain its most profitable. By August, Unitel in Laos had $1 billion in accumulated revenue over seven years and aggregate profit of $300 million. Unitel has a brand value of $132 million, making it one of the 30 most valuable in the region and top in Laos, according to a report by UK-based Brand Finance in April. The company currently has more than 2.5 million customers. It accounts for 47% of Laos's mobile market and 35% of the broadband market.

Metfone in Cambodia has a brand value of $94 million and is the leading mobile service provider in the country with 5.5 million customers and 37% market share. It recorded $256 million in revenue last year.

Viettel already operates in East Timor, and is about to launch in Myanmar with a $1.5 billion commitment and two local partnerships. It is also believed to be negotiating its entry into Indonesia.

Viettel is targeting $1.5 billion in gross revenue from its overseas markets this year, up from $660 million in 2015. This has been driven by expansion of profitable third- and fourth-generation services. Overseas revenues were up 13% year on year in the first half of 2016.