Volvo will go electric from China FRANKFURT, Germany -- Volvo Cars will build its first electric vehicles in China as it moves to develop an entirely electrified lineup, and the automaker also is unveiling a subscription service as an alternative to car buying, CEO Hakan Samuelsson told The Nikkei in a recent interview.

The Sweden-based automaker surprised the world in July by announcing that all new-model releases starting in 2019 would be electrified.

Diesel too expensive to keep

"We chose to be open about this. We want to be early," he said, so Volvo can secure a supply of batteries and other key components. "We want a long-term relationship with a partner, having some commitments, both ways." 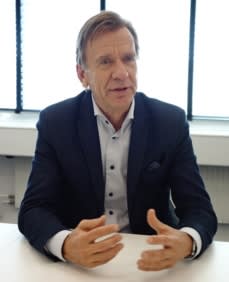 "Customers are asking a lot about electric cars today," Samuelsson said. "They find electric cars attractive. I think you also have to admit that Tesla has been a stimulus or injection into this car business. They've made very attractive electric cars ... So I think they have been inspiring us."

Volvo plans to roll out five electric cars by 2021, with the first debuting in 2019 under the new premium electric vehicle brand Polestar. Volvo will build this in China with parent Geely Automobile Holdings, hoping to take advantage of economies of scale.

Under the Volvo brand, an electric version will become available for the XC40 midsize sport utility vehicle as well as larger models.

Samuelsson expressed confidence that electric vehicles will take root, betting that their prices will be equivalent to those of conventional cars in 2025.

Diesel engines have been Volvo's mainstay, but the company will end their development after the models currently being released, he said. The entire lineup eventually will comprise electric vehicles, plug-in hybrids and gasoline hybrids.

"We believe in hybrids based on petrol," the CEO said. "We think the diesel will be very complicated and expensive in the future" -- too complicated after factoring in treatment systems for emissions.

Samuelsson also shared prospects that more consumers will shun car purchases, highlighting a new flat-rate subscription becoming available this year in some markets and hitting Japan as early as next year.

Customers would pay no initial fee, use a vehicle for a monthly flat rate and switch to a new model in two years. In Europe, the XC40 SUV will be available for 699 euros ($819) a month, including insurance and repairs. Various services will be offered as well.

Volvo currently offers package delivery to customers' cars in Sweden and some other markets. Delivery personnel can use a one-time digital key to unlock the vehicle and leave the package inside even when the driver is absent.

In the U.S. city of Los Angeles, Volvo is experimenting with car wash and refueling services, using digital keys. The company expects subscription services to account for one-fifth of its income down the road. "We want to deliver much more than just a car," Samuelsson said.