Wanda Group sheds assets as fast as it bought them A man walks in front of an entrance to a Wanda Department Store in Wuhan, Hubei Province. The company once operated around a hundred such department stores across China.   © Reuters
DAISUKE HARASHIMA and YUSHO CHO, Nikkei staff writersFebruary 14, 2019 04:15 JST | China
CopyCopied

DALIAN, China/SHANGHAI -- Chinese conglomerate Dalian Wanda Group, known for its acquisitiveness, is unloading assets at a faster pace as a crackdown on corporate debt cuts off financing -- with the proceeds exceeding 130 billion yuan ($19.2 billion) for sales spanning the past year and a half.

The company announced Tuesday the sale of all 37 of its remaining department stores for an undisclosed sum to private electronics retailer Suning.com, which hopes to turn them around in part through a fusion with e-commerce.

Wanda had operated up to 100 or so department stores as anchor tenants of its Wanda Plaza commercial complexes. The business had fallen into the red, as the slowing Chinese economy and the rise of online shopping have led customers to avoid relatively pricey department stores. Wanda converted unprofitable locations to Suning stores under a 2015 partnership agreement, but the results seem to have missed expectations.

A Wanda spokesperson declined to comment on the deal.

Wanda was founded in 1988 by Chairman Wang Jianlin, a former 17-year veteran of the People's Liberation Army, expanding the scope of its business beyond real estate in concert with China's rapid economic growth. It answered the government's call to "go out" through overseas acquisitions, drawing the world's attention with its 2012 purchase of U.S. movie theater giant AMC Entertainment Holdings for $2.6 billion. 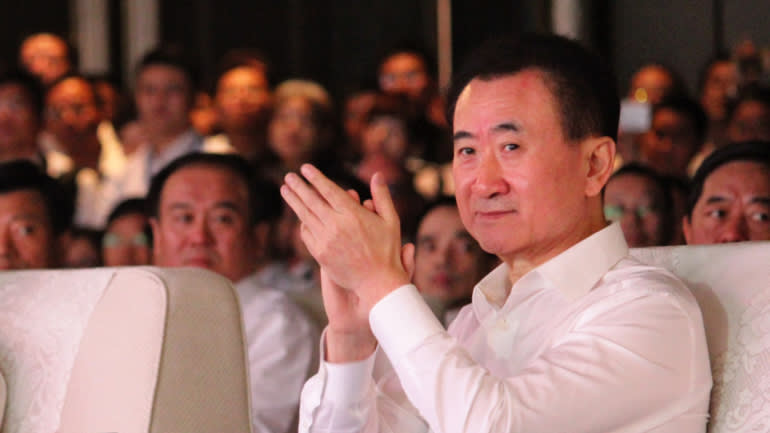 But most of the funds were borrowed from financial institutions, leaving Wanda with 200 billion yuan in interest-bearing debt at one point. Wang still vowed to continue making acquisitions. The company decided to delist its real estate subsidiary after the unit's share price languished.

The group's fall began in the summer of 2017. Fearing capital outflows, Chinese authorities moved to pump the brakes on overseas acquisitions. The government even informed financial institutions about lending restrictions for Wanda in particular, suddenly cutting off its funding.

As a result, Wanda sold off over $9 billion in assets, including hotel and theme park properties -- as well as stakes in itself to top companies such as Alibaba Group Holding -- as financial insecurity prompted the company to become leaner. The real estate segment generated 35% less sales in 2018, and Wanda's assets have lost a fifth of their peak value.

Interest-bearing debt will shrink about 30% compared with 2017 as proceeds from asset sales are used to repay lenders. Commercial facilities and the movie theater business also continue to provide stable growth.

"Since Wanda is fully committed to an asset-light, low-debt developmental strategy, it won't be shaken," Wang told colleagues in a work report this January.

The sale to Suning a month later reveals that Wanda is still not on a stable track. Its request to relist the real estate subsidiary has not been approved for years, and the company remains reliant on financial institutions for funds. This has resulted in almost constant speculation that it will sell even more assets. In addition to diversifying its fundraising, Wanda is locked in a zero-sum game with online retailers and faces uncertainty in China's politically sensitive movie industry.

Wanda's plight demonstrates the widespread influence of Chinese state-owned banks, which can control businesses by closing the funding spigot to achieve government and Communist Party goals.

Like Wanda, conglomerate HNA Group was forced to unload hotel, leasing and foreign real estate assets to curb debts. Fosun International has turned its investment back toward China, with many smaller deals worth hundreds of millions of dollars.

"We are bringing technology and brands from overseas acquisitions to China," a Fosun executive said.

Furthermore, China's private sector shows deference to the Communist Party and the government.

China Southern Airlines named Ma Xulun general manager in January, poaching him from the same job at China Eastern Airlines. The decision was made by China's State-owned Assets Supervision and Administration Commission.

China Eastern is a respected listed company, preparing to begin joint operations with Japan Airlines. At the same time, it has given clear priority to party and government aims rather than shareholders or partners.

"It is not easy to prepare for a change in government policy," said Gao Ting, a strategist at UBS Securities.

Return on equity for Chinese companies is below 10% -- worse than their American, European and even Japanese counterparts. President Xi Jinping's efforts to attract foreign investment may be for nothing should businesses feel dragged down by political risks.