Wang, a 60-year-old former army officer, joined the business world at 34 and has built Wanda into a conglomerate encompassing commercial facilities, hotels and other operations both in and outside China. Ranked the richest person in Asia, Wang has his eyes set on making Wanda into the king of services amid China's economic slowdown.

"I will make Wanda the world's biggest tourism company within five years," Wang declared during an opening ceremony on Saturday for the Wanda Xishuangbanna International Resort in this autonomous prefecture near the border with Laos. 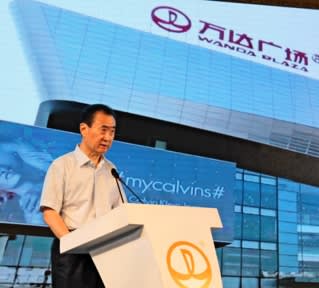 Wang Jianlin speaks at an event on Sept. 26. Keen attention is being focused on his next strategic move.

After quickly reading a prepared statement in a high-pitched voice, Wang returned to his seat, and later pleasantly shook hands with guests. Wearing a simple white short-sleeved shirt and a pair of black slacks, he showed no sign that he is a former military officer, except a sharp-eyed look he occasionally showed, and is now a real-estate tycoon.

Nevertheless, Wang has assets totaling $32 billion, and the Bloomberg Billionaires Index in May ranked him the richest person in Asia.

Wanda operates some 120 Wanda Plaza shopping centers as well as condominiums, hotels, movie theaters and other properties. It acquired AMC Entertainment Holdings, the second-largest movie theater chain in the U.S., a few years ago as part of its aggressive merger and acquisition strategy both at home and abroad.

The Wanda Xishuangbanna International Resort, built on a 5.3-sq.-km site for 15 billion yuan, is effectively a town created by Wanda. It includes luxury hotels, a shopping center, a theme park, a theater and other facilities, including the best hospital in Yunnan, elementary and junior high schools, condominiums, and a shopping district for local residents.

The new resort, which opened on Saturday, is a litmus test for Wanda's plan to shift its business priority to tourism, finance, medical care, Internet and other services. 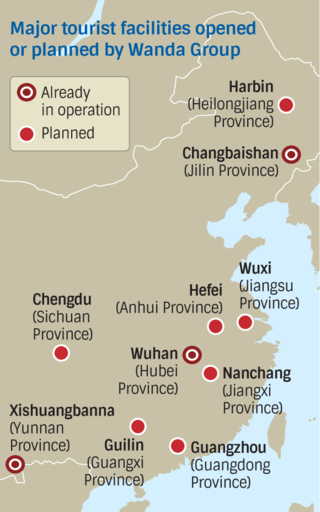 Wang was born the eldest of five sons in a rural village in Sichuan Province in 1954. As the family, supported by their father working in forest management, was poor, he quit school at 13 to help his father. Wang joined the army at age 15, thinking he could pursue a career in the military.

But China at that time was rapidly shifting toward a market economy under the reform and open-door policy. Wang realized that knowledge of economics would become important in China, so he enrolled in Liaoning University in Liaoning Province in 1983 to study business administration while still serving in the army.

After graduation, Wang was assigned to the Dalian Army Academy, also in Liaoning. Through a connection he established at the academy, he began to work for the Dalian municipal government.

While the municipal government was promoting housing development, a city-owned developer, Xigang District Residential Development, quickly fell deep into debt due to a residential project gone sour. The city office proposed ceding the company to a person capable of repaying the debt.

Thinking the proposal a golden opportunity, Wang offered to take it on. In 1988, he began his career as an entrepreneur, taking over the firm which would later be reorganized as Wanda Group.

Wang applies know-how he acquired in the army to his business. Extremely strict on punctuality, for example, he cancels appointments with visitors who fail to appear on time. "Working at Wanda was extremely tough," a former employee said.

Wang once reprimanded several executives for nearly two hours because they mishandled the opening of a new shopping center.

The effects of China's economic slowdown stand in the way of Wang's business. The real estate market will not grow as strongly as it used to, while the conventional way of operating shopping centers has become unworkable due to the growth of online commerce and changes in consumer preferences.

Wang therefore decided to retreat from the real estate business.

Proud of his writing ability, Wang tells people close to him that he will retire from the vanguard of business in 2020 and write an autobiography. He does not have much time left to solidify his place as the king of services and develop Wanda into a global company before he retires.