'We're as red as red can be,' SoftBank's Son says of earnings

Tech investor vows to be more careful, but says WeWork can rebound On the latest quarter

The event began in Tokyo at 4 p.m. Donning a pink tie, the entrepreneur kicked off his announcement with a blunt acknowledgment of the recent failures he has faced.

"Our results for the quarter are in tatters. We're as red as red can be. I think this was probably the biggest three-month loss since the start of the company," Son said.

"News media have reported that SoftBank and WeWork are at risk of bankruptcy, that SoftBank is in a quagmire, and there is some truth to that. I want to explain what happened without making any excuses."

Son said the group's sales fell in line with trends, but the Vision Fund, which had been a key contributor to revenue, suffered a plunge. "We ended with a quarterly loss as large as our profit a year earlier, largely because of WeWork." SoftBank Group's CEO the group's Vision Fund put the value of its investment in WeWork at $1 billion at the end of September, down from $4 billion three months earlier. (Photo by Ken Kobayashi)

"My investment judgment was poor in many ways," Son said. "I deeply regret that."

Vision Fund assessed the value of its investment in WeWork's at $1 billion as of the end of September, down from $4 billion at the end of June.

Despite such setbacks, Son said SoftBank Group's shareholder value increased by 1.4 trillion yen to 22.4 trillion yen in July-September. "These are numbers that many people don't want to believe, but they are true."

Son blamed WeWork's narrow gross margin and high costs for the coworking startup's losses. "The number of desks continues to double, and many of the buildings are being renovated," he said.

On remedies for WeWork

Son outlined a three-point plan to get WeWork back on its feet. "First, we halt the expansion of new buildings. Second, we cut costs. Third, we sell or shut down new, unprofitable operations. Generally speaking, everything outside WeWork's core operations will be cut."

Once WeWork stops adding new offices, the majority of its network will be making solid profit in about a year and a half, he said. "Time will solve the problem," he said. "Just by suspending additions, the apples ripen. Once they're ripe, they'll make money. That's all."

He said suspending additions will halve WeWork's costs. "The break-even point will move forward, and we will be able to make a V-shaped comeback. This is our rebuilding plan. SoftBank has undertaken difficult rebuilding projects before. It will work again this time."

But the executive stressed that WeWork is ultimately a separate entity from SoftBank Group. "Our investment targets are financially independent, and we won't rescue them even if they are in the red.

"WeWork was an exception and we won't do this again," he said, joking that he did not want to anger SoftBank Group Chief Financial Officer Yoshimitsu Goto. Son said he intended to keep the group's loan-to-value ratio at under 25%, and no more than 35% even in an emergency.

In terms of screening future investments, Son said free cash flow was his most important yardstick for judging corporate value. "Even if a company doesn't have free cash flow right now, I decide whether to buy in based on discounted cash flow five or seven years into the future.

"We will learn from our mistakes on WeWork, and create solid governance standards regarding business founders," he added.

When asked if WeWork was more a real estate company than an internet company, Son acknowledged this was a fair question. "What I'm explaining today is just the basics" he said. "After we stem losses with this basic plan, I hope to introduce a more advanced plan that uses artificial intelligence to increase added value.

"We can achieve $1 billion" in earnings before interest, tax, depreciation and amortization "in four to six years," he said.

Regarding WeWork co-founder Adam Neumann, "he has both good and bad qualities," Son said. "I may have given too much weight to his good qualities, and turned a blind eye on the negatives."

But Son also reiterated the golden rule of startup investment.

"If we are to tally up wins and losses based on earnings, we are 3 to 1. In this business, there is no such thing as being 10 to zero."

On the Vision Fund 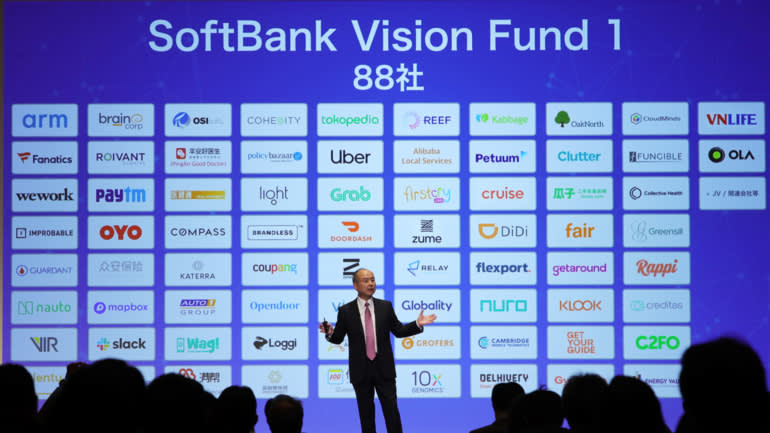 Son sought to reassure investors on the group's strategy, saying, "Seed-round investment in Vision Fund 2 has begun in a steady fashion." (Photo by Ken Kobayashi)

Son addressed a question concerning his future investment strategy. "The investment period for SoftBank Vision Fund 1 has closed," he said. "Seed-round investment in Vision Fund 2 has begun in a steady fashion, using our own money.

"I will refrain from making any comments at this stage, but Vision Fund 2 will make a smooth start."

A question once again returned to WeWork. "Is there anyone who can act as your minder, Chairman Son?"

"We have a scary director on our group's board named Yanai-san," said Son, referring to Fast Retailing Chairman and President Tadashi Yanai, the founder of the Uniqlo clothing chain. "Lately I've become more hesitant," Son added. "We have a structure in place where I cannot act recklessly."

The next person asked about a probable date for when WeWork's parent, We Company, will go public.

"Lately, after looking at the performance of the American business chat app provider Slack Technologies, as well as Uber, I've come to believe that we should be a little more cautious when considering the date to list," Son said. On the other hand, " there are companies that are starting to turn profits, and our orientation toward multiple listings over the next two years will not change."

Son was asked if SoftBank's investment strategy will change given how unicorns have underperformed in the stock market.

"I was asked the same question during the dawn of the internet era," he said. "Now such companies are dominating the global top 10 list in terms of market capitalization. Meanwhile, Japan's heavy industry companies have fallen off in global market values.

"The world that was once fanciful is becoming real, and things that were once real are falling apart. History repeats itself. In fact, I feel a sense of crisis at how Japan does not take on enough new challenges. The vision I have carried to this point will not be moved an inch by this partial turmoil." 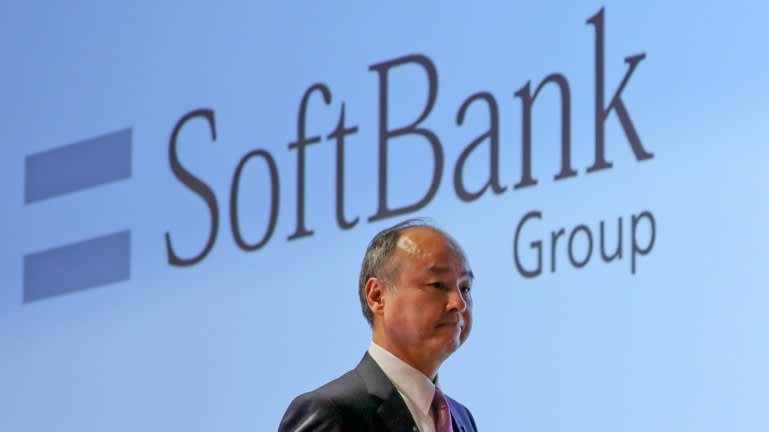 Son leaves a news conference on Nov. 6, following SoftBank Group's announcement that it had lost a net $6.4 billion in the July-September quarter. (Photo by Ken Kobayashi)

Son discussed his feelings about retirement. "Starting from when I was 19, I said I would pass the baton to my executives when I'm in my 60s, and that has not changed as of today. I may feel that I want to stay on a little more when I turn 69," the 62-year-old said.

"But with the recent criticisms, business management has become so interesting I can't help myself," Son added. "I'm filled with the feeling of wishing to set up funds and chase after the artificial intelligence revolution.

"Some investors may wonder if I'll think more cautiously in light of WeWork and Uber, but there are many facets in which there won't be a change in plans," Son said. "The scale of the second fund will be largely unchanged from the first fund."

Son touched on the investments' cash flow. "There are companies that will go public next year, the year after and five years down the road, but we are analyzing all companies based on the event that they list, and sufficient cash flow will materialize."