Myanmar is one of the fastest-growing whisky markets, with sales rising 63% between 2011 and 2016, according to industry researchers IWSR. (photo by Yuichi Nitta)
WATARU SUZUKI, Nikkei staff writer May 25, 2018 21:39 JST | Myanmar, Cambodia, Laos
CopyCopied

In a joint press release, Pernod Ricard -- the maker of whisky brands Ballantine's and Chivas Regal, among others -- said it would "install an internationally experienced management team and become the largest shareholder" in a new joint venture.

Financial terms of the new company were not disclosed.

Yoma, known among foreign investors as the go-to local partner in Myanmar, is a conglomerate spanning real estate, car distribution and the local franchise of the KFC chain. "We are delighted High Class Whisky will become part of the Pernod Ricard family alongside a portfolio of leading brands," said Melvyn Pun, the son of Serge Pun and who currently serves as Yoma Strategic's chief executive. 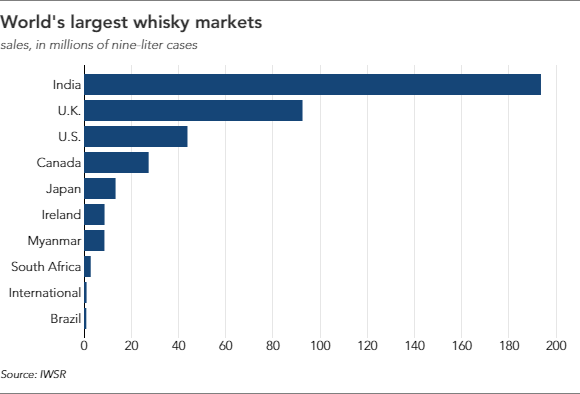 The string of deals in the sector indicate a strong appetite for a slice of one of Asia's fastest-growing whisky markets. Whisky sales in Myanmar stood at 8.66 million nine-liter cases in 2016, a 63% increase from 2011, according to IWSR, a London-based industry research company. It is expected to grow another 20% by 2021.

Philippe Guettat, chairman and CEO of Pernod Ricard Asia, called Myanmar "a very promising and dynamic market which has seen tremendous economic progress over the past years."

The closing of the transaction "is subject to completion of the restructuring of the High Class business as well as customary conditions," and is expected to take place next year, the companies said.