With IPO, Mercari makes US its top overseas priority

Mercari eyed the global marketplace from the beginning, and is banking on the IPO to fuel success overseas. (Photo by Manami Yamada)
AKANE OKUTSU, Nikkei Staff WriterJune 18, 2018 17:01 JST | Japan
CopyCopied

TOKYO -- Flea market app Mercari, one of Japan's few unicorns, will go public on June 19, chasing the elusive dream of overseas success shared by other tech companies in the country.

Mercari lets users buy and sell secondhand items anonymously online, and has become a huge hit since its release in 2013.

"I check the app every day," said a 22-year-old Tokyo resident. There are competing services in Japan, including Rakuten's Rakuma, but "there are more things sold on Mercari, and everybody is using it," she said.

Mercari is used by 94% of the domestic users of consumer-to-consumer marketplace apps, according to the company. It has been downloaded 71 million times as of March 2018. Unlike other marketplace apps, which focus on narrowly defined products -- such as handmade items -- or have interfaces mostly designed for female users, Mercari aims to attract everyone.

Just about anything can be found on Mercari, from clothes to seemingly useless products, including toilet paper cores and nearly depleted bottles of perfume. Majority of Mercari users are women, but men's apparel accounts for about 15% of total sales.

Mecari, with a market cap of more than 400 billion yen, will make its debut on the Tokyo Stock Exchange Mothers market -- an exchange for startups and high-growth stocks -- to beef up its human resources, technology and overseas business.

The app's popularity is due largely to its ease of use: To list an item on Mecari, users need only take a picture of the product, select a few options, and then set the price.

Mercari is unique in that when an item is purchased, the seller and buyer can choose to remain anonymous. Only user names are known; real names and addresses are never disclosed.

Naomi Fukunaga, 30, used Mercari to sell some belongings after clearing out her room. She has tried other market apps, but feels that "being able to remain anonymous lowers the psychological hurdle for using the service." But investors say that Japanese companies must look elsewhere for growth. "Japanese startups should tap foreign market as we are not likely to see any big boost to Japan's domestic demand," said Gen Isayama, general partner and CEO of WiL, a  U.S.-based incubator.

"Should Mercari turn out to be successful in foreign markets, it would be significant as we have hardly seen Japanese startups gaining a footprint outside the country," Isayama said.

Indeed, such a plan is in the works. Mercari's co-founder and CEO Shintaro Yamada is a serial entrepreneur and former CEO of Unoh, a social game company that was acquired by U.S. game company Zynga. He is said to have established Mercari after traveling the world searching for ways to start a global business.

Eyeing the global market from the outset, Mercari has now ventured into the U.S. In a letter released after announcing the IPO, Yamada spoke of the U.S. as a "starting point" toward becoming "a global market place." The idea is that services that succeed in the U.S. can take off elsewhere with minimal localization pains, as was the case with Google and Facebook.

The U.S. version of the app launched in 2014 and has been downloaded 37.5 million times, but is still relatively unknown compared to C2C competitors like eBay, Craigslist and Poshmark.

The startup is trying to improve its U.S. marketing, rebranding in March with a new logo and slogan, and has appointed John Lagerling, former vice president of Facebook, as chief business officer last year.

It has also put up billboards, including one along the highway linking San Francisco International Airport to the city, a hot spot for tech-company advertising. Mercari is emphasizing the sell aspect of the app in its U.S. marketing, since Americans are more likely to sell secondhand items in transactions that involve physical interactions, such as garage sales.

The company has partnered with parcel delivery services USPS and FedEx, allowing sellers to ship items at fixed prices that are lower than normal retail rates. 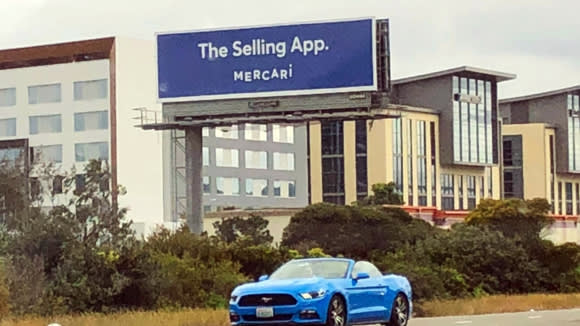 As part of its revamped marketing strategy in the U.S., Mercari rebranded its app and put up billboards that emphasized selling.   © Courtesy of Mercari

Despite fierce competition, Mercari sees opportunity because no company is dominating the U.S. market for C2C apps. Many services either operate as community sites, or act as a platform both for commercial and secondhand products, such as eBay.

Although Asia may be an easier market for Mercari to crack, the company is focusing on expanding around the globe rather than ending up as a regional product. It is now concentrating on ventures in the U.S. and U.K, where it launched last year.

Indeed, investors say that it is these kinds of companies they like.  "We are keen to support Japanese startups eyeing foreign markets" said WiL's Isayama.

Numerous other Japanese companies are looking to expand overseas. Online fashion retailer Start Today is taking its private brand overseas, setting up offices in the U.S. and Germany. Meanwhile, C Channel, a video-sharing venture founded by a former president of chat app Line, is expanding into about 10 Asian countries and regions.