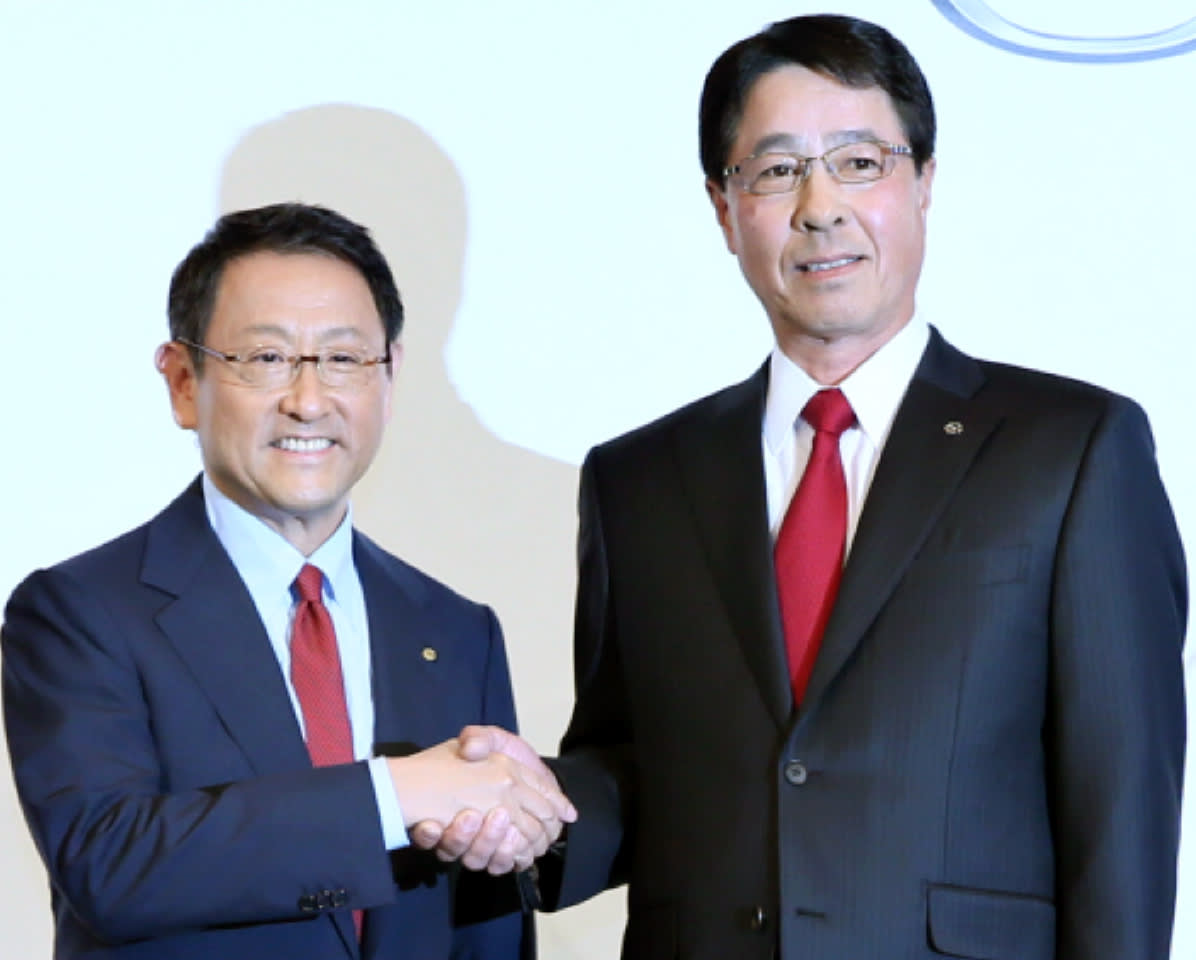 TOKYO/NAGOYA, Japan -- Toyota Motor is stepping on the partnership gas, planning a mutual investment with Mazda Motor on top of last year's full takeover of Daihatsu Motor, as a rewriting of auto industry norms forces it to seek collaboration to improve quality as well as scale.

"In this great transition phase, we must play offense as well as defense," President Akio Toyoda told shareholders at a June meeting in Aichi Prefecture. "All options are on the table, including mergers and acquisitions," he said. That declaration came as a "shock," according to one group member head, as the president "rarely talks about capital policy."

Toyota will take a roughly 5% stake in Mazda to develop key electric vehicle technologies and jointly build a factory in the United States, The Nikkei learned Thursday. This comes on the back of a more competitive environment in the auto industry with stricter environmental standards and the development of new technologies like autonomous driving.

Following the report, Toyota and Mazda each released a statement this morning stating they will have a board meeting today to discuss the partnership. Toyoda and Mazda President and CEO Masamichi Kogai are both expected to attend a joint press conference in Tokyo later in the afternoon.

The times they are a-changin'

The past two to three years have brought a slew of changes to the auto industry. Germany's Volkswagen took its diesel-emissions scandal as an opportunity to shift toward electric cars, while China, India, France and the U.K. announced new regulations on conventional fossil-fuel engines. Toyota, which had pinned hybrids at the center of its eco-car strategy, found itself swimming against the current.

America's Tesla rode the electrification wave to surpass even giants like compatriot General Motors in market cap terms, while Google zoomed ahead in the field of autonomous driving using its artificial intelligence technology. And as the technology behind cars changed, the emergence of services like ride-hailing company Uber Technologies spurred a global shift away from car ownership and toward shared use.

The likes of Volkswagen and GM are putting more effort into transportation services over competing on the strength of their cars' workmanship. Western automakers are approaching information technology companies adept at gathering and analyzing customer and trip data. Toyota is hard-pressed to stay competitive with only loose, scale-focused partnerships with industry co-members.

These shifting winds prompted Toyota to tighten hands with Mazda and jointly develop conventional engines -- including diesel ones, Mazda's forte. Toyota put Daihatsu in charge of the group's compact car operations for emerging markets. It hopes to be able to stand up to Google and its ilk by clearly delineating group members' roles, then putting redundant human and capital resources toward working on electric vehicles and cutting-edge technologies such as autonomous driving.

Mazda, ill-positioned to handle the global electrification shift, will in turn get help from Toyota to shore up its lacking electric-vehicle technology. It also needs major production bases outside of Mexico and China. With the Japanese market contracting, tapping into Toyota's global production and sales networks should also give Mazda a boost, lightening its investment burden from pushing into markets including emerging ones.

As it absorbs new strengths, such as Mazda's, in design, Toyota -- which turns 80 this year -- also faces the challenge of drawing up a group strategy for handling customers' changing attitudes toward cars. It remains to be seen how the company will weather what Toyoda has called an "auto industry shift unlike any in a century."