If the Chinese tech titan is going to live up to its hype, it will have to complete the mission to develop both its internet services and e-commerce segments to offset its lopsided smartphone segment.

Xiaomi began trading more than 2% below the initial offering price of 17 Hong Kong dollars ($2.17) per share. The company recovered somewhat during the day, but still ended its initial session 1.2% below offer at HK$16.80. What was once expected to be a $100 billion valuation of Xiaomi was just $50 billion.

The underwhelming results can partly be blamed on bad timing. Chairman and CEO Lei Jun touched on the trade frictions between the U.S. and China during his address prior to ringing the opening bell.

One saving grace is that Lei is not just a simple founder of a smartphone maker. During his days as a student at China's prestigious Wuhan University, he first dreamed of starting up a company after reading books by the late Apple CEO Steve Jobs and other tech figures. 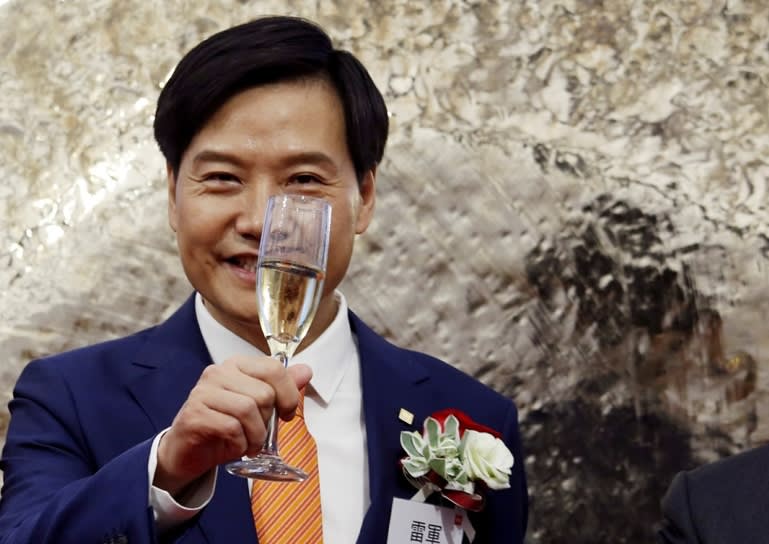 Xiaomi CEO Lei Jun attends the listing of the company at the Hong Kong Exchanges in Hong Kong on July 9.    © Reuters

While in school, Lei first took a stab at entrepreneurship by founding an antivirus software company, which flopped. Upon graduation, Lei went to work for Beijing-based software developer Kingsoft, where he distinguished himself. He quickly rose in the company until he became CEO in 1998 at the age of 28.

Lei took Kingsoft public in Hong Kong in 2007. He quit that same year, and went on to establish Xiaomi in 2010. Lei then returned in 2011 to Kingsoft, where he currently serves as the chairman.

At the time of Kingston's float, Lei was a major shareholder in the company. The windfall from the listing bankrolled his prolific angel investing activities.

Lei also had a hand in founding other successful ventures. He helped form e-commerce outfit Joyo.com, which Amazon.com later bought out. He took part in launching the gaming portal Duowan, which was rebranded as YY and listed on the Nasdaq in the U.S. Lei also helped set up the Lakala payment platform and the online apparel brand Vancl.

In all, Lei funded close to 500 companies either through Kingston's investment fund, or through Xiaomi. One of those is Ninebot, the startup that acquired Segway, the U.S. producer of the self-balancing scooters. Wearable device maker Huami listed on Wall Street this February.

From the start, Xiaomi has billed itself as a company that offers a mobile and internet ecosystem. It would not be a stretch, however, to say that Xiaomi controls an entire economic sphere, represented by its chain of physical shops. The stores display a lineup of 500 types of consumer electronics, including rice cookers, robot vacuum cleaners and air purifiers. The shops, which employ simple designs, have drawn heavy traffic from young buyers.

More important, Xiaomi made sure its smartphones can connect to its other electronic products and mutually support sales. The company's smartwatches record the wearer's physical activity, whose data can be read and organized on smartphones. The handsets can be used to remotely control drones and household equipment.

While Guotai Junan Securities and other financial advisers believe that Xiaomi shares are overvalued, others say the group possesses strengths found in no other Chinese tech juggernaut. Alibaba Group Holding and Tencent Holdings base their business models on domestic internet services, but Xiaomi's smartphones give it an opening to attract users abroad, said an executive at an international investment company.

Kingsoft's float in 2007 also undershot initial estimates. Lei used the frustration at the result as a springboard to launch Xiaomi and build it into the company it is today, according to the same investment executive. It will be incumbent on Lei to finish the other two legs of Xiaomi's race and prove the doubters wrong.