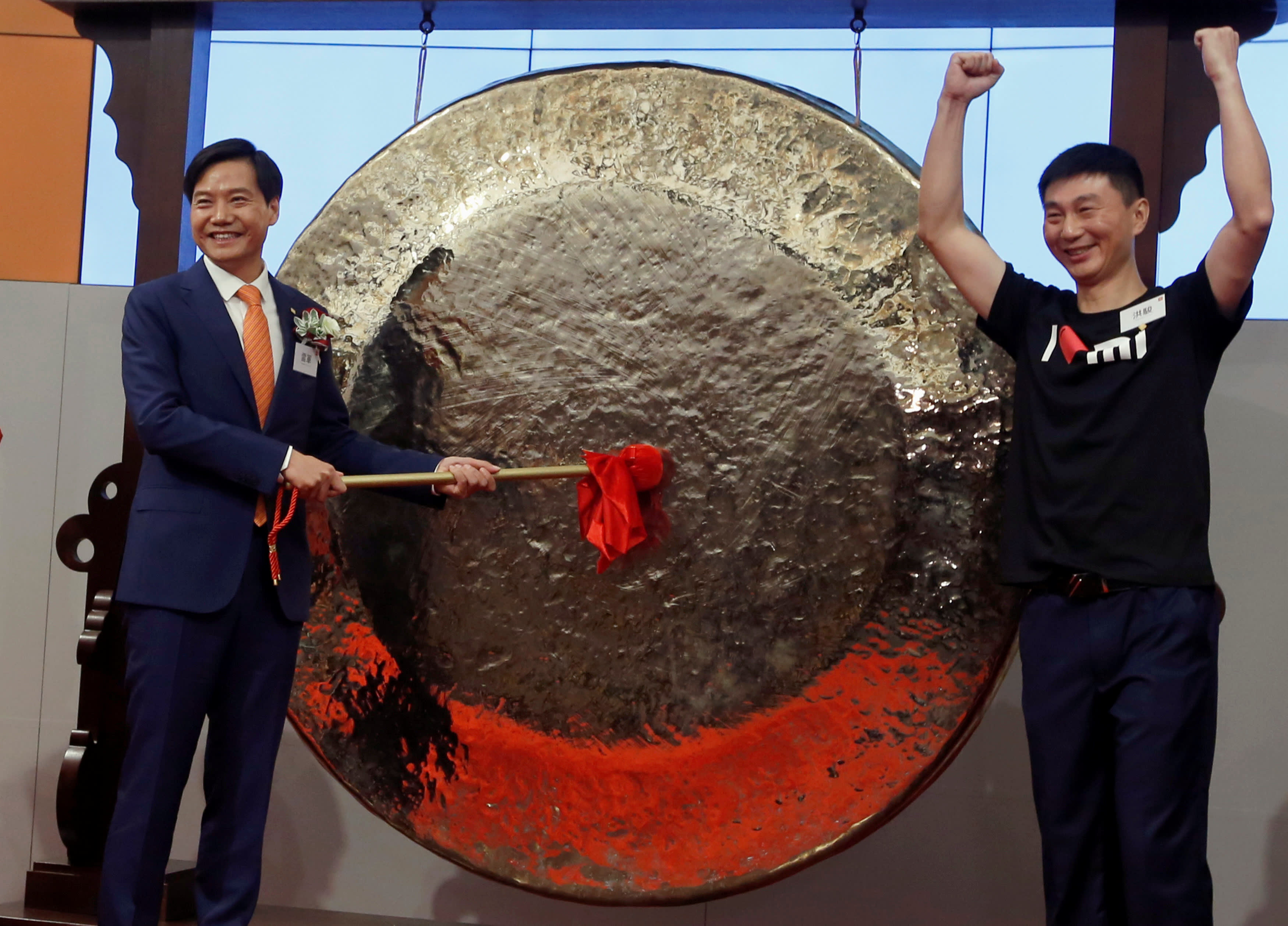 HONG KONG -- Chinese mobile phone maker Xiaomi saw its shares fall as much as 6% on its market debut on Monday, casting shadows over other Chinese tech unicorns who might be planning to enter Hong Kong's capital markets.

Recent market fluctuations related to trade tensions between China and the U.S., as well as bloated valuations, were to blame for the lackluster performance of a host of Chinese tech names who recently made their debut on the Hong Kong Stock Exchange, analysts said.

Xiaomi's share price was down 1.2% at 16.8 Hong Kong dollars when the market closed on Monday, while the benchmark Hang Seng Index added 373 points or 1.32%.

"I think we should not focus on short-term market fluctuations," Xiaomi chief financial officer Chew Shouzi said after the market opening, adding that it would "take time" for investors to recognize the company's true value. Group founder and chief executive Lei Jun, on the other hand, blames the ongoing trade tensions between the world's two largest economies for the subdued market performance, saying at the launch ceremony that current macro-economic conditions were "far from ideal".

However, Xiaomi is not the only "new economy" company that has experienced a disappointing ride on the Hong Kong market recently. In fact, most companies that have listed in the past year have seen their shares fall below the offer price.

Yixin Group, China's largest online car retailer, has lost almost 60% of its market value since its debut last November, while shares in Razer, a gaming hardware manufacturing company, have fallen more than 55% since last December. Meitu, which makes photo-editing applications and smartphones, and online insurer ZhongAn Online have also seen their shares dip below their offer prices despite initial rises. Only China Literature, the Tencent-backed digital book unit, is holding its ground, closing at HK$76.65 ($9.76) on Monday compared with its initial price of HK$55.0. But the shares have still seen a significant decline from their peak at HK$110.

"The performance on Xiaomi's first trading day is already better than expected," Harry Yuen, associate director at Oceanwide Securities said, adding that its share price could have fallen much more if there had not been an overall market rebound on Monday.

Yuen said Xiaomi, as well as other Chinese "new economy" companies that recently went public, had their valuations pushed up by private equity companies and are now struggling to convince ordinary investors of the price tag.

Investors and analysts have been questioning Xiaomi's target market valuation since it announced plans to float its shares. The Beijing-based technology group had hoped for a valuation of $100 billion, pitching itself as an internet company rather than hardware. But the final offer price of HK$17 per share put the company's market capitalization at the lower end of its target range, at around $54 billion.

Still, Xiaomi is the first company to list in Hong Kong with a dual-share class structure, which gives greater voting rights to certain shareholders and has been adopted by companies including Alibaba and Facebook.

Tencent Holdings said it intended to list its music business subsidiary Tencent Music Entertainment Group in the U.S. instead of Hong Kong, in a filing to the city's bourse on Sunday. Choi said it would be far easier for its music unit to achieve a higher valuation in the U.S. following a good start on the New York Stock Exchange by its rival Spotify, whose share price has risen more than 30% since April.

China's Meituan Dianping, an online food delivery and ticketing services platform with a valuation of $60 billion, had filed for a Hong Kong IPO last month and could raise over $4 billion, according to Reuters.