Market speculation is swirling that Apple is developing a standalone AR device that will go on sale as soon as the end of 2019. (Photo by Cheng Ting-Fang)
CHENG TING-FANG, Nikkei staff writerNovember 8, 2017 00:34 JST | Taiwan
CopyCopied

"Based on what we have learned, [new AR products] need to look good and be light enough to wear ... that makes the casings for such device very complicated to manufacture and there are still a lot of challenges to overcome currently," Catcher Chairman Allen Horng told analysts and reporters in an earnings conference on Tuesday. 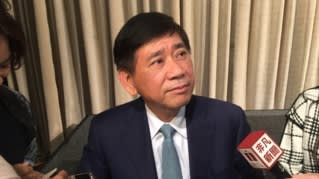 Horng said that compared with virtual reality headsets, AR devices are more likely to gain traction in the future as mobility is a key for such gadgets to thrive.

The executive did not name the product his company is currently working on but the market has been speculating that Apple would roll out a standalone AR product in the coming years.

Apple is developing AR glasses that will go on sale as soon as the end of 2019, according to Jeff Pu, an analyst at Yuanta Investment Consulting.

AR overlays virtual images and information on the real world, allowing users to interact with their surrounding environment. Conversely, VR headset users can only stay in the virtual space.

Apple Chief Executive Tim Cook prefers AR to VR and says his company is in a unique position to develop the former. "In my view, AR amplifies human performance, instead of isolating us," Cook said in an earnings call on Nov. 2, adding that AR will change the way people use technology.

Catcher supplies metal casing for iPhones, iPads and Macbooks now. For the latest iPhone 8 and 8 Plus, Catcher makes the aluminum metal frames and assembles them with glass backs.

Horng said he was optimistic for a robust year-on-year sales growth in the first quarter of 2018, a traditional low season, and bullish on demand across smartphones, tablets and notebooks.

For all of 2018, Catcher also expects its sales to show healthy year-on-year growth, said Horng. The Taiwanese company has expanded orders from other Apple casing suppliers such as Jabil and Foxconn Technology, an affiliate of Hon Hai Precision Industry, according to Yuanta's Pu.

Kylie Huang, an analyst at Daiwa Capital Markets, said she expected Catcher to continue securing more orders to make casing components for iPhones in 2018. "In terms of total Apple's iPhone orders, for 2018, Catcher is likely to have a 25% share, compared with only 21% to 22% this year, and 18% in 2016," said Huang, adding that there was still upside for the company's stock price.