Company in focus: Baidu tries to cure what ails it BEIJING/TOKYO After years of rapid growth and a de facto monopoly over China's internet search market, Baidu is wrestling with its first crisis: a scandal involving deceptive medical advertising.

"Baidu faced a challenging second quarter," Chief Executive Robin Li admitted in a conference call on July 28, after announcing a record profit decline for the April-June period. Its net profit slumped 34.1% on the year to 2.41 billion yuan ($362 million), the biggest fall since the company went public on the Nasdaq in 2005.

That was a sharp reversal from the fiscal year that ended in December, when its net profit surged 155%. The hospital offering the treatment paid for the high placement. Many Chinese net users mistakenly believe Baidu search results are ranked by credibility and popularity. Many of the top spots are, in fact, advertisements. The incident also put a spotlight on misleading or false information in medical advertising, which makes up 20-30% of Baidu's revenues.

The Chinese government authorities launched an investigation and ordered Baidu to block ads from unlicensed or unqualified health care providers. It also imposed a 30% cap on the amount of space on each webpage that can be used for advertising.

Baidu followed up with new rules of its own requiring advertiser to show its government-issued license for internet content providers -- which all Chinese websites must have -- and its verified enterprise account to prove the identity of the company.

That will dent Baidu's search revenue. Li said in the earnings call that the new regulations and voluntary measures will "suppress" sales for the next two to three quarters. He suggested the slow growth will persist at least through the rest of the year.

Baidu's murky outlook is weighing on its shares. The company's market capitalization has tumbled by about $9 billion over the past three months to $55.7 billion, leaving it just a quarter the size of rivals Tencent Holdings and Alibaba Group Holding. Baidu is now clearly the weakest of the so-called BAT companies, China's big three online companies -- Baidu, Alibaba and Tencent.

The scandal also highlights problems with Baidu's staff of more than 40,000. Some employees appear too focused on profit and not enough on innovation. One insider told The Nikkei that some in the company had sounded the alarm about questionable health care advertising, but the ads continued to appear in search results and on the website until the student's death. Baidu's sales team, which is driven by commissions, dismissed the warnings, the source said.

Another issue arose in January concerning Baidu's Tieba message board. The company admitted that it had accepted payments from a hospital to moderate an online discussion forum for hemophilia patients, who believed they were dealing with independent health experts.

Li publicly apologized and said the company would no longer allow organizations or people with commercial interests to moderate health-related forums. "Baidu got greedy somewhere along the line," said a software engineer who recently left the company.

BEYOND SEARCH Baidu's problems with discipline are not limited to paid searches and medical ads. Although Li and other executives are pushing new technology and innovation, their initiatives are not always executed effectively. 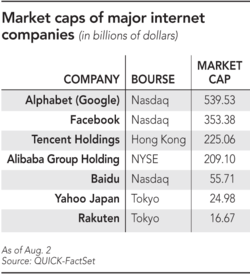 In May, for instance, the company agreed with officials in the city of Wuhu, west of Shanghai, to set up a zone where self-driving cars developed by Baidu would cruise the streets. So far, the project has not lived up to its billing.

On one July day, around 30 cars were moving about a specially designated area of the city near a plant run by Baidu partner Chery Automobile. But upon closer inspection the supposedly driverless cars turned out to be ordinary vehicles driven by humans. A security guard at the factory's front gate said he had heard nothing about the trial, as did officials with the Wuhu city government and Chery.

Li reportedly talked up self-driving technology to Chinese President Xi Jinping in December, describing plans for test runs in Anhui, Zhejiang and Guizhou provinces as well as Beijing. But that promise has been met with skepticism within the company. "No accurate information has really reached us," one insider said.

The gap between the leaders and the company's front line troops makes Li's vow to commercialize self-driving cars within three years look unrealistic.

Baidu has come a long way since its founding in 2000, with sales ballooning by a factor of more than 200 over the past decade. But employee training has not kept up. Of Baidu's 43,000 employees, 40% have been with the company for less than two years.

To regain market confidence, analysts say the company needs to develop strong new businesses beyond search. But it has lagged behind Alibaba and Tencent, in emerging areas such as social media, online payments, content streaming and ride-sharing.

Alibaba, which set up the Alipay payment service a decade ago, dominates the market in China. Tencent is chasing Alibaba with its WeChat Pay, based on its WeChat messaging platform, which has grown to over 700 million users. Baidu set up a mobile payment system, Baidu Wallet, only in 2014 and its user base is a tenth the size of Alipay, according to industry estimates.

China's top ride-hailing service, Didi Chuxing, has grown quickly, helped by an investment from Apple and China Life Insurance, the country's biggest life insurer. Alibaba and Tencent are also major shareholders in Didi, linking the ride-sharing service to their own platforms. Although Baidu has invested in Uber Technologies, the U.S.-based ride-sharing company, it seems to have missed its chance to grab a big piece of the potentially huge ride-sharing market in China. MANAGEMENT EVOLUTION Google pulled out of China in 2010 after authorities began censoring news about a crackdown in the Xinjiang Uighur Autonomous Region. Baidu took advantage of the lack of serious rivals to expand its sales of paid search results. Google, by contrast, works to keep its search results separate from its other commercial interests.

While Google rose to become the world's second-most valuable company by market capitalization by sticking to its corporate mantra of "Don't be evil," Baidu's share price is depressed, at only 10 times its projected earnings per share. 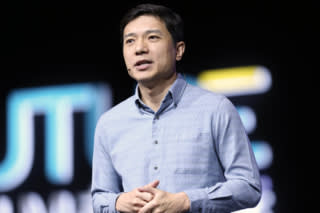 Li is trying to move Baidu toward a greater emphasis on technological rather than business innovation. In his conference call, Li referred to artificial intelligence, including self-driving technology, as a future mainstay of the company's growth.

It will take time for these new technologies to bear commercial fruit. In the meantime, Li may need to think about issues other than technology, such as how to strengthen management and Baidu's corporate philosophy. If he succeeds in turning both cutting-edge technologies into mainstay businesses and strengthening the company's management, the medical ad scandal will be remembered as a milestone in Baidu's evolution.