Company in focus: China's Ping An puts the 'tech' in fintech

Huge investments in AI, big data and more are bearing fruit for the insurer Ping An has suggested that the market value it as a tech player, but some analysts say that would be premature.   © Reuters
JOYCE HO, Nikkei staff writerDecember 28, 2017 10:00 JST | China
CopyCopied

HONG KONGAlibaba Group Holding, Tencent Holdings and Baidu have long been recognized as China's technology leaders. Is Ping An Insurance Group ready to join them?

That question may not be as far-fetched as it seems, and many investors are watching closely as China's largest insurance company by market capitalization -- twice that of Baidu -- shifts its business strategy toward tech.

It would not be unreasonable to conclude that Ping An Chairman and CEO Peter Ma Mingzhe has his eye on the fintech success of the two other business leaders who make up the "three Ma's" of corporate China: Alibaba founder Jack Ma Yun's Ant Financial and Pony Ma Huateng's Tencent Financial Technology unit.

The Shenzhen-based Ping An is increasingly trading like a tech stock. Prices of the company's shares, which trade in both Hong Kong and Shanghai, have more than doubled since the beginning of 2017.

Investors are not only betting on healthy demand for insurance among China's growing middle-class and aging population, they are also keen to cash in on Ping An's latent value, namely its increasing tech prowess and advantages as a conglomerate.

Along with state-owned Citic Group and China Everbright Group, Ping An is one of the few companies in China with a license to offer a full suite of financial services, including insurance, banking, trusts, securities, futures and financial leasing. Since inscribing technology into its strategy in 2008, Ping An has built and bought a wide array of online and offline assets, including those in health care, autos, real estate and personal finance. The massive amount of information it has collected through years of insurance underwriting, including policyholders' health data, also helps the company with biometrics, artificial intelligence and other data-powered technologies.

Ping An had 64 million monthly active users at the end September, compared with Alibaba's 549 million and Tencent's 980 million for their core offerings. Ping An's total individual customers for its core financial products came to 126 million.

"As it provides one-stop financial services and in-depth understanding of customers via its proprietary big data and technology, Ping An creates a closed loop for customer attraction, migration and retention, facilitating cross-sales and upsales of its financial products," Iris Tan, senior equity analyst at Morningstar, wrote in a note in November.

"This model is unique and difficult to duplicate," she added, noting the company's 67% success rate in cross-sales to existing customers, which contributed more than 40% to the company's new premiums, or income from underwriting.

SURPASSING ITS PEERS Investors' enthusiasm for Ping An lifted its market cap to 1.58 trillion Hong Kong dollars ($201 billion) as of Dec. 26, exceeding the valuation of many global insurers, including Allianz of Germany at 86.54 billion euros ($102 billion) and France's AXA at 60.91 billion euros. Ping An's early success most likely would not have been possible without Ma, its chairman, who has maintained a good relationship with Beijing since the company was founded in 1988 in Shekou, an industrial zone in Shenzhen. Ping An Insurance Group Chairman and CEO Peter Ma Mingzhe has maintained a good relationship with Beijing since the company was founded in 1988.   © Reuters

The People's Bank of China approved the establishment of Ping An as China's first joint-stock insurance company, with state-owned Industrial & Commercial Bank of China holding a 51% stake and China Merchants taking 49%.

Goldman Sachs and Morgan Stanley came on board with a $70 million investment in Ping An in 1994, making the insurer the first foreign-funded mainland financial institution. Ma then went on to build the company's securities and trust units.

Even though China's State Council had decreed in 1993 that various types of financial services -- specifically banking, brokering, trusts, life insurance and property insurance -- must be run separately, Ma stuck to his vision of Ping An as a one-stop financial services provider. While other financial companies were forced to break apart their businesses over the following years, Ping An remained whole. 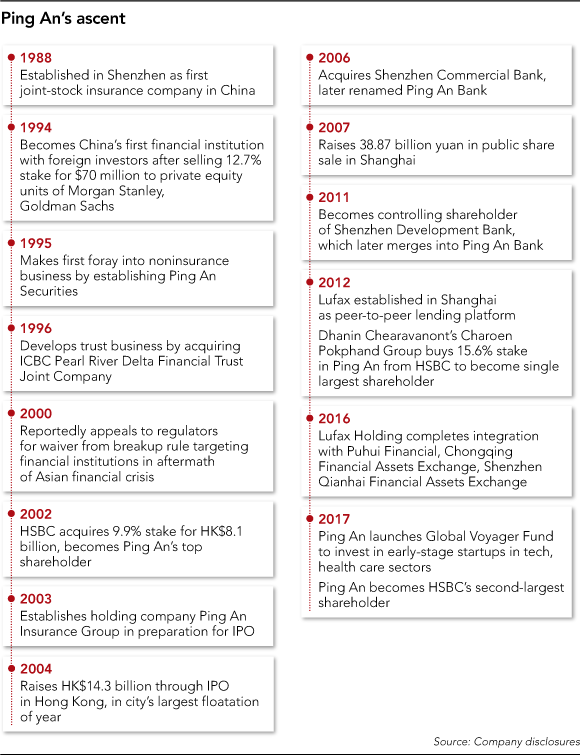 In 2002, Ping An received official notice that it could operate various financial services and began its restructuring as a holding company. Its initial public offering in Hong Kong raised HK$14.3 billion, the city's largest IPO of 2004.

Ping An has grown steadily ever since, achieving a compound annual growth rate of nearly 26% in net profit between 2004 and 2016. Its only decline in profit came in 2008 amid the global recession.

Its net profit for the first nine months of 2017 was 66.32 billion yuan ($10.09 billion), up 17.4% from a year earlier. The value of new business for its life and health insurance segment grew 35.5% over the same period, while the insurance business as a whole, including property and casualty, contributed 71.3% to its bottom line. More than 95% of Ping An's revenue comes from mainland China. As measured by premiums, Ping An is China's second-largest insurer in both the life and the property-casualty segments, behind China Life Insurance in the former and PICC in the latter. Both of those are state-owned companies.

For the coming decade, Ma envisions Ping An becoming a full-fledged tech company, a shift that has been long in the making. He established Ping An Technology in 2008 and has invested more than 50 billion yuan, or 1% of Ping An's annual revenue, in biometrics, big data, artificial intelligence, blockchain and cloud computing.

STARTING TO PAY OFF This hefty investment is bearing fruit. The company's facial recognition system has a 99.8% accuracy rate, Jessica Tan Sin-yin, Ping An's chief operations officer and chief information officer, told an investors' meeting in Shenzhen in November. This not only helps reduce identity fraud, she said, it also cuts the time needed to process applications for loans and insurance policies to minutes.

At the same investors' meeting, Jason Yao Bo, Ping An's chief financial officer, said such capabilities will support the company's asset-light approach, in which it aims to generate more income from selling proprietary technology to other service providers, and using technology to increase efficiency, rather than capitalizing on financial assets. Ping An says its technology is used for security and identification at Shenzhen's international airport, a post-graduate exam site and health care centers. The company is also targeting China's financial services sector through a cloud-based product called OneConnect.

In addition to helping small and midsize lenders establish a digital presence and providing other services, OneConnect employs blockchain technology for China's enormous -- yet fragmented -- interbank market, where instruments such as cash bonds, repurchase agreements and certificates of deposit are traded.

"We charge by volume. It's a pay-as-you-go model," Tan said, comparing OneConnect to a financial-leasing platform that capitalizes on interbank transactions. This, she said, allows Ping An to participate in China's growing banking sector without bearing the costs of traditional lending, such as meeting reserve requirements.

OneConnect has already linked 400 banks, 20 insurance companies and 2,000 nonbank financial institutions, and it has handled transaction volume valued at 8 trillion yuan, according to the company.

"Investors can look forward to the company starting to earn a return for the company's historical investments in tech, as well as the benefits that technology is giving the company in growing and improving the profitability of their core businesses," David Millhouse, head of China research at Forsyth Barr, said.

TECH VALUATION Ping An, which trades at 16 times its earnings, has suggested the market value the company as it does tech players, which normally enjoy a much higher price-to-earnings ratio. But some analysts say that would be premature. Ping An's Lufax Holdings unit is a lending platform that has evolved into a financial products marketplace.   © Reuters

"Valuating it as a tech company is way too early," Scott Russell, Macquarie Group's head of financials research for Asia, said. "There are certainly elements of the Ping An group that should be valued as peers to technology companies and internet businesses, once sufficient financial data is available."

Russell believes the value of Ping An's tech business will be clearer after Lufax Holdings and Ping An Good Doctor -- two of its flagships tech units -- file their IPO prospectuses. Both are expected to debut in Hong Kong in 2018.

Shanghai-based Lufax, which was founded in 2011, now has a value of $18.5 billion. It was China's largest peer-to-peer lending platform by transaction volume and loans outstanding as of Dec. 15, according to research company Wangdaizhijia.

Ping An Good Doctor, a health care portal started in 2015 with a value of $3 billion, enables real-time sharing of medical resources and initial-diagnosis services. The Shanghai Ping An Financial Centre. More than 95% of the company's revenue comes from mainland China.   © Getty Images

Japan's SoftBank Group plans to take a stake of 5-10% each in OneConnect, Good Doctor and Lufax through its $97 billion Vision Fund, according to a recent report by Bloomberg. Ping An representatives were unavailable to repond to questions from the Nikkei Asian Review.

As for its own investment moves, the company is looking at promising health care and fintech startups outside China with its $1 billion Global Voyager Fund, launched in May. It also profited in September from the $1.5 billion IPO of ZhongAn Online Property and Casualty Insurance -- China's first online-only insurer, set up with Alibaba and Tencent.

On Dec. 6, Ping An acquired a 5% stake in HSBC, which formerly held a more than 15% stake in the Chinese company. This move marked not only a symbolic ownership shift, it also signaled Ping An's growing presence in the global arena.

"Ping An gets it," Paul Schulte, an analyst and founder of Schulte Research said. "Many other banks and insurance [companies] are still sleepwalking."