BEIJING The state-owned Chinese train manufacturer CRRC is facing slower growth as its home market matures, which means it is time to do more abroad. 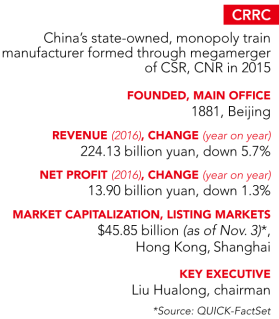 "We are shifting our overseas strategy from zouchuqu [go abroad] to rongjinqu [blend in overseas]," Liu Hualong said in a recent interview with the Nikkei Asian Review. Liu is the chairman of both CRRC Corp. and of the major state-owned enterprise CRRC Group. CRRC Group owns more than 50% of the Hong Kong- and Shanghai-listed core company, CRRC.

The group and the listed company have "put an emphasis on the great principle advocated by Chinese President Xi Jinping of 'doing business together, making things together and sharing profits,' in order for our overseas operations to co-exist and co-prosper with local economies," Liu said on the sidelines of the 19th Communist Party Congress in Beijing on Oct. 20. He served as a delegate to the congress.

The term "zouchuqu" refers to the long-running government policy of encouraging Chinese companies to expand their businesses beyond the country's borders. The concept embraces the purchase of external assets while also relying on the conventional model of manufacturing low-cost products at home for export to overseas markets. "Rongjinqu" promotes the strategy of Chinese companies adapting to overseas operations by integrating with local economies. To court foreign railway operators, the company aims for "local production of railway cars, local procurement of parts, employment of locals as plant workers and localization of management," Liu said, adding that the company is working on becoming a "good neighbor" in local communities.

CRRC was created in June 2015 through the merger of two state-owned peers, CSR and CNR. It is the world's largest manufacturer of railway rolling stock.

But the Beijing-based company is facing challenges. It is expected to see drops in both revenue and net income in 2017, which would mark two consecutive years of declines. As growth in China's domestic railway investment stalls following a decade of rapid expansion in high-speed railways, CRRC wants to increase its ratio of overseas sales to 25%. In 2016 it was 8%.

"We still have plenty of room for growth outside China," Liu said.

A potential problem for Chinese overseas rail projects is the perception that China exports technology in a way that does not benefit local communities. Chinese companies have a history of bringing in their own workers and importing raw materials from China. CRRC wants to show customers that it is willing to contribute to local communities by setting up manufacturing facilities and creating jobs there.

Already, in 2011, the company set up a maintenance center in Kuala Lumpur after receiving an order in 2010 for 30 train cars for an intercity railway.

CRRC built an assembly plant there in 2015, which now has an annual production capacity of 200 cars, and employs about 170 workers, more than 80% of whom are Malaysian, Liu said. 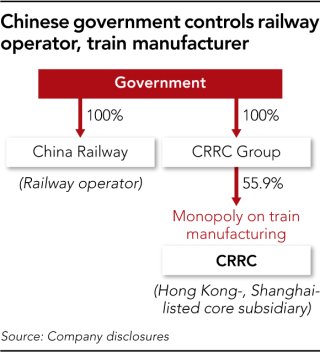 The facility in Malaysia has sent several employees to a CRRC plant in China for training. The company also has enrolled two Malaysian plant executive candidates in a master's program at Tongji University in Shanghai.

Liu noted that CRRC "has operations in more than 70 locations in about 20 countries, and 13 research-and-development bases outside China," vowing to step up efforts to support President Xi's pet project, the Belt and Road Initiative across Eurasia. "We are moving forward with internationalization in line with the localization policy, with both the number of overseas employees and overseas assets expanding 10-fold since 2012," Liu said.

CRRC also has built plants for electric machinery in India according to state-owned news agency Xinhua, in addition to its existing factories in Malaysia, Turkey and South Africa.

But CRRC has attached the greatest importance to its overseas facilities in the U.S., and Liu described the "three highs" of entering that market.

"The demand for product quality is high, and if a product is accepted by the U.S. market, it means we get the hallmark of world-level quality," he said.

After it won a $560 million contract from Boston's subway system for 284 train cars in 2014, the company decided to build its first U.S. production plant in nearby Springfield, Massachusetts. The contract requires the $60 million plant -- which is scheduled to open in 2018 and begin deliveries the following year -- to meet a local-content ratio of at least 60%.

CRRC has also said it will employ 150 local workers. In April it received an order for another 120 train cars valued at $250 million for the Boston subway.

The company also has landed a $1.3 billion contract for 846 subway cars in Chicago, and a $647 million order for 282 cars for the Los Angeles subway. In Chicago, the company plans to build an assembly plant at a cost of $100 million, with the aim of putting it into operation next year.

CRRC earlier this year sent more than 30 locally hired employees at the Springfield plant for three months of training at the company's production base in Changchun, Jilin Province.

"We anticipate opening a new high-speed railway line every year," He Lifeng, chairman of the National Development and Reform Commission, said during the party congress. But the pace of construction will likely plateau and demand for new train cars could be nearing its peak. 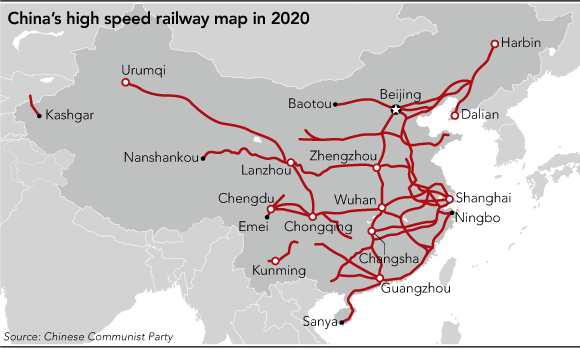 Indeed, state-run railway operator China Railway has said that its capital spending in 2016 fell 3% from the previous year to 801.5 billion yuan ($120 billion). Some 80% of the company's annual capital spending is used to construct railways and 15% to 20% to purchase rolling stock. 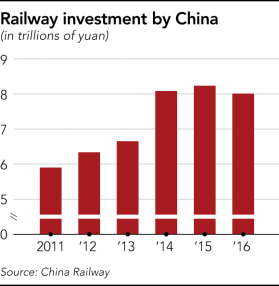 Shares of CRRC traded in Hong Kong are about a third of what they were from the time of the merger in April 2015.

Kelvin Lau of Daiwa Capital Markets in Hong Kong reinstated a "hold" rating on Oct. 27, after the company reported its third-quarter earnings. "Overall, we think CRRC lacks [a] solid growth driver," he noted in a report. CRRC appears to have little choice but to pursue high-growth opportunities overseas, while seeking slow-but-steady earnings. But there have been snags.

For example, Mexico in 2014 abruptly canceled a contract awarded for the CRRC-led consortium of Chinese and Mexican companies to build a high-speed rail system. The project was postponed indefinitely after an allegation that one of the Mexican companies in the consortium gave a luxury home to the wife of the country's president, Enrique Pena Nieto.

In June 2016, XpressWest, a U.S. passenger-rail venture, terminated its joint-venture activities with Chinese companies to build a high-speed rail link between Los Angeles and Las Vegas. According to a press release from XpressWest, the decision was "based primarily upon difficulties associated with timely performance" and "challenges in obtaining required authority to proceed with required development activities."

Meanwhile, Thailand scaled back plans in 2016 for a long-distance railway due to disagreements with China over financing.

Meanwhile, Hitachi of Japan announced plans to boost sales from its railway operations to between 700 billion yen and 800 billion yen ($6.12 billion and $7.0 billion) by the fiscal year ending March 2022, up 50% from present levels.

Hitachi has improved its business performance mainly in Europe. In July, through its Italian subsidiary, the Japanese company was awarded a large contract to provide rail cars and a train control system for the Baltimore Metro SubwayLink in the U.S., and also in 2018 it will begin shipping high-speed trains from Italy to the U.K.

For his part, Liu takes a philosophical approach toward CRRC's future.

"The corporate acquisitions that we envision are long-term strategies aimed at developing high-end products and promoting internationalization. Mergers and acquisitions are something like a romance and require agreement from both sides.

"There is no point in unrequited feelings. Although we are aggressively seeking M&A opportunities, we should proceed cautiously with them in an orderly manner," Liu said.