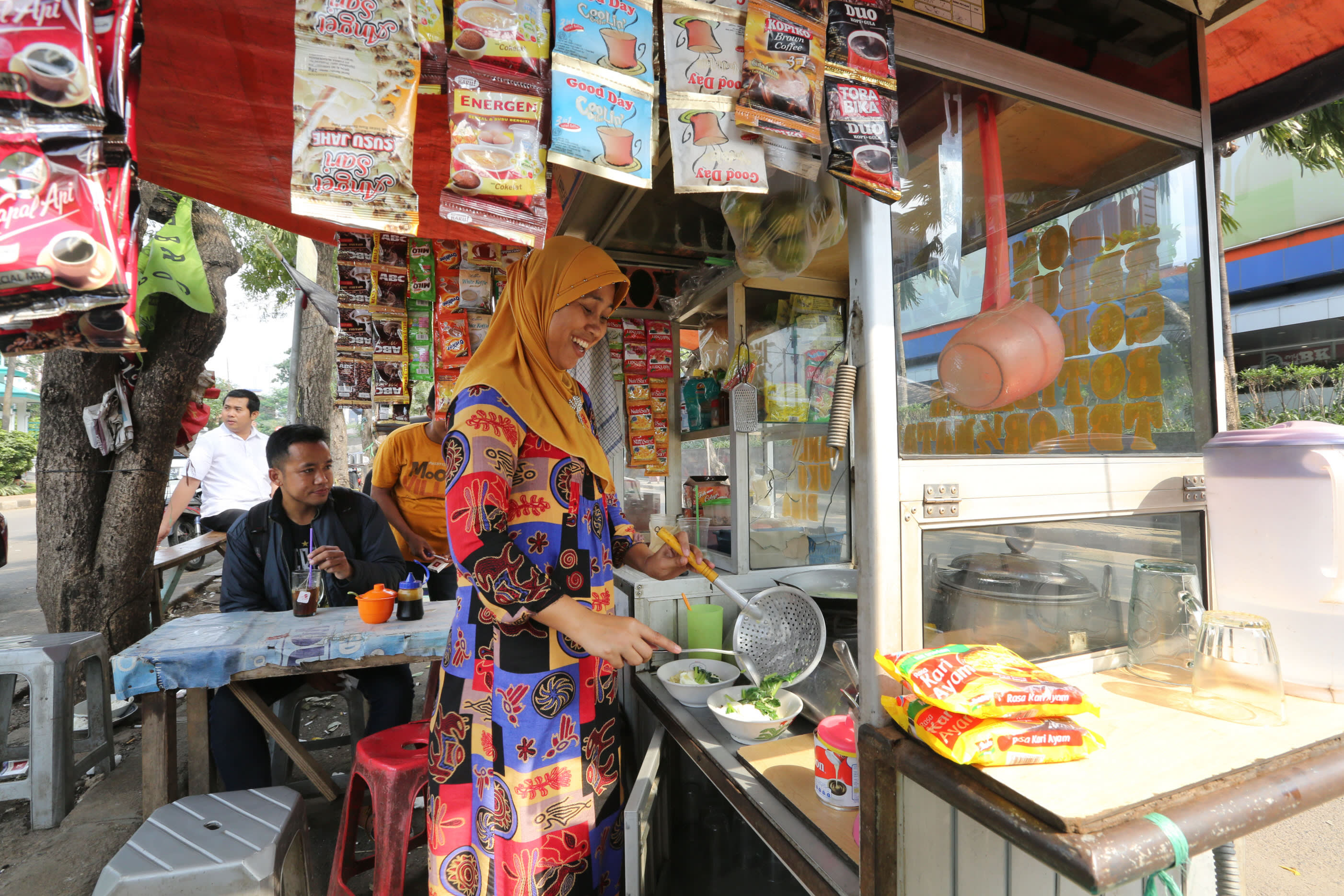 JAKARTA/ISTANBUL For a man known to shy away from publicity, Anthoni Salim, chief executive of Indonesia's largest food maker, was in a high spirits when he met with local journalists recently for his annual question-and-answer session at company headquarters in Jakarta. The normally press-shy Anthoni Salim, president and chief executive of Indofood Sukses Makmur, recently opened up at a press event in Jakarta.

"If [South] Korea has K-Pop, we have Indomie," Salim declared, offering an unusual point of comparison for Indofood Sukses Makmur's flagship instant noodles. It would not be much of a stretch to say the brand is known to every one of Indonesia's 250 million residents.

Indomie is less known outside the country, but that is changing. Indofood, the core member of Indonesia's Salim Group, is gaining a steady presence in emerging markets across the Middle East and Africa at a time when global rivals are hit by weak demand and regulatory hassles. Shares of Indofood CBP Sukses Makmur, Indofood's key consumer products unit, reached an all-time high of 17,000 rupiah ($1.27) on June 17.

One of Indofood's hottest markets is Turkey, where an affiliate opened a factory in 2014. Indofood collects licensing fees for use of its branding, formulas and technology. And while the company does not provide sales figures, it is apparent that Indonesian noodles are taking Istanbul by storm. "Indomie is outperforming other brands," said Metin, a sales clerk at an Istanbul supermarket. The eye-catching Indomie packs with their bright colors and Turkish lettering entice shoppers with chicken, vegetable and curry flavors. At 1.25 Turkish lira (40 cents) each, they also sell for slightly less than the competition.

"I personally prefer Indomie's chicken flavor," Metin said. According to him, Indomie outsells Makarneks, the most popular local brand, which is made by a joint venture between Japan's Nissin Foods and a local company.

Indofood has been targeting emerging markets like Turkey, which has a population of 78 million. "Turkey is a bridge to enter the EU," Salim said, noting its annual population growth of 2-3%.

Indonesia has the world's largest Muslim population, which gives Indofood an advantage in markets like Turkey, where 99% of the population is Muslim and receptive to products that are halal, or compliant with Islamic dietary laws. Indofood set up a joint venture factory in Saudi Arabia in the mid-1990s and now has three factories there, one of which makes sauces. Indomie noodles are produced overseas in at least eight other countries, including Egypt, Nigeria and Syria, and are sold in over 60 markets.

UPS AND DOWNS The invention of instant noodles in the 1950s is widely credited to Japan's Momofuku Ando, the founder of Nissin Foods. Indofood launched Indomie in the early 1980s, after Anthoni Salim's father, Sudono Salim, was granted a monopoly on flour milling in Indonesia, enabling the mass production of instant noodles as the country searched for an alternative to rice. The deal was made possible by the elder Salim's close ties at the time to President Suharto. 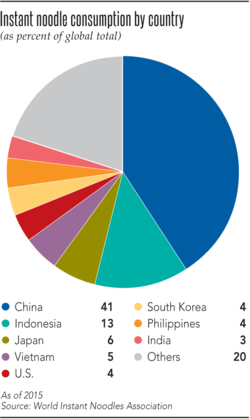 The brand quickly caught on, catapulting Indonesia to the position of second-largest noodle consumer after China. The noodle business was a cornerstone of Sudono Salim's empire, which then diversified into cement, banking and automobiles. But all this came crashing down after the Asian financial crisis and Suharto's subsequent departure in 1998.

The cash-strapped Salim Group was forced to sell most of its assets, though Anthoni Salim managed to hang on to Indofood, the group's crown jewel. Nissin, which was eager to enter the Indonesian market, had been looking buy a stake in the business. The two companies later formed a joint venture, but it did not work out, and in 2014, Nissin bought out Indofood's stake. Salim Group's operations are comprehensive, covering raw materials, distribution and retail. This has helped give Indofood a presence across the archipelago's thousands of inhabited islands.

Indofood has continued to dominate its home market, and its noodles cater to a wide range of local tastes -- there are said to be more than 100 different Indomie flavors. The company sold 12.6 billion packs of instant noodles in 2014, or roughly 50 for every Indonesian man, woman and child. It accounted for about 70% of the domestic instant noodle market that year, according to research company Euromonitor International, and 15% of the global market. In the same period, the noodle division generated 65% of the revenue and 97% of the operating profit for Indofood CBP Sukses Makmur. Indofood's market value has doubled over the past five years, surpassing Nissin in dollar terms and outstripping many other international peers. The market cap of Hong Kong-listed Tingyi Holding, the world's top player in instant noodles by sales, has shrunk by more than two-thirds over the same period as growth in China slows. Meanwhile Nestle India's noodle operations were suspended for months last year by allegations -- which failed to stand up in court -- that its market-leading Maggi noodles contained high levels of lead and undisclosed monosodium glutamate.

TWO-WAY STREET Indofood's growth overseas comes as foreign competitors continue vying for a slice of the Indonesian market. After breaking up with Indofoods, Nissin teamed up with Japanese trading house Mitsubishi and started producing its flagship Cup Noodle products locally. Meanwhile Wings Group, Indonesia's second-largest noodle player with around 15% of the market, is aggressively undercutting Indomie on price.

For Indofood, business overseas not only generates growth, it also earns U.S. dollars to mitigate foreign exchange fluctuations that have been such a headache for the company. "We import wheat, plastics, spare parts -- if we can get dollars from our exports, we will have a dollar balance," Salim said. "We can use dollars we earn from exporting to pay for imported items."

But while it has put the problems of the Asian financial crisis behind it, Indofood remains a relatively new player in the global landscape. Nissin already earns about a fifth of its revenue abroad, and Taiwan food conglomerate Uni-President Enterprises has a strong foothold in the Philippines. Indofood CBP's overseas revenue, by comparison, continues to hover around just 9% of its total.

"We're trying to gradually increase [overseas business] to 15%, 20%, and if we can reach 30%, that will be the ideal condition," Salim said. He is particularly keen to use Indomie's brand power to tap the global halal food market, and the company plans to set up a factory in Morocco by the end of the year, according to local reports.

Not everyone welcomes these overseas moves, however. "Investors prefer that it focus on domestic business instead of overseas, where profit margins are lower," said Harry Su, head of research at Bahana Securities, a local brokerage. Indofood has been diversifying at home in expectation that rising incomes will lift consumption of more expensive foods.

"In the next couple of years, the most important thing will be to minimize losses in new divisions," Su said, pointing to a beverage joint venture established with Japan's Asahi Group Holdings in 2012.

In a rare interview with The Nikkei last September, Salim said one of Indofood's advantages lies in Indonesia's favorable geography. "Being on the equator, being an ASEAN country, we have the advantage of having big land, big sea, sun, lots of rain and good water," he said. But it is Indofood's battle for a foothold in overseas markets that will reveal how competitive the company really is.