Conglomerate puts technology to work in every step its supply chain SINGAPORE/LAMPUNG, Indonesia On a sunny day in late July in Lampung, a rural farming town in the southern part of Indonesia's Sumatra island, an employee of Olam International was busy making the rounds of cocoa farms, collecting data from farm owners. "How old are your cocoa trees?" he asked. "What is your crop yield?"

He pulled out his smartphone and tapped various details into an app, including plant types, tree ages and harvest volumes, along with the age and a photo of one of the farm workers.

The app is part of the Olam Farmer Information System, a database that the Singapore-based agricultural conglomerate hopes will include 500,000 farmers worldwide by 2020. So far, more than 100,000 farmers in 21 countries have been registered in the system.

Olam manufactures and markets a wide range of agricultural products and food ingredients, including nuts, coffee, cocoa, cotton and palm oil. The company's primary business is sourcing these products from farmers, in some cases processing them itself, and supplying them to such global food and beverage giants as Nestle, Unilever and PepsiCo.

While the company faces strong competitors, including U.S.-based agriculture conglomerate Cargill, Louis Dreyfus of the Netherlands and Singapore-based global agribusiness company Wilmar International, Olam is the world's No. 1 supplier of cashew nuts, cocoa beans, cocoa products, and dehydrated onions and garlic. It is also the top grower of almonds and ranks No. 2 as a supplier of coffee and rice. An Olam employee checks the data on an OFIS database in Lampung, Indonesia.

As technology comes to play an ever greater role in how companies operate, Olam is betting on artificial intelligence and big data to expand its smart farming initiatives, which are aimed at increasing efficiency, quality and traceability at its supplier farms around the world.

The Olam Farmer Information System, or OFIS, is key to meeting those goals. Data collected in the field is fed into an online platform to provide a comprehensive, one-stop view of operations at individual farms. This platform can be used in a number of ways, such as mapping the exact location of a farm to calculate the distance to the nearest water source and other farming necessities.

By analyzing the data it collects, Olam can suggest the best practices for individual farmers, such the appropriate amount of fertilizer to use or which types of shade trees should be planted to provide the best environment for cocoa production.

Some of these suggestions are generated automatically by the OFIS, while others are made by Olam's agronomists. In some instances, the company provides farmers with seedlings, fertilizers or grafting materials in exchange for crops.

A SMALL REVOLUTION Small-scale farmers account for the bulk of Olam's suppliers. They are mostly concentrated in Southeast Asia and Africa, where small farms often have limited funding and little access to information on the latest farming technology. That is one reason Olam, with its network of 4.3 million smallholder farmers, set up an internal digitization task force last year to explore the use of IT in agriculture.

OFIS falls under Olam Direct, one of the programs set up by the task force. "We are merging all [existing] systems to be able to develop a digital, direct [means of providing] origination information from the farmer," Sunny Verghese, co-founder and CEO of Olam, told the Nikkei Asian Review in a recent interview.

OFIS also plays an integral part in the company's sustainability and social initiatives. The database provides information on where educational facilities are located and where Olam is offering social programs, allowing the company to identify underserved areas and launch new programs there.

Olam says the OFIS initiative not only benefits small-scale farmers but the company, too.

"This is not a charity," said Moray McLeish, Olam's vice president of corporate responsibility and sustainability. By introducing small-scale farmers to efficient agricultural practices, he said, "They can realize a higher price for a better quality product." This in turn "adds value to our final products and differentiates them" from those of competitors. Bapak Thamrin, a 57-year-old cocoa farmer in Lampung, said he is already seeing a rise in crop yields since he started working with Olam about a year ago.

"Once I adopt these practices on all of my land, I think my income from farming will double," he said. With help from Olam, he has also set up a separate farm for grafting materials to sell to other farmers in the region, which is supplementing his income while he replaces old cocoa trees with younger ones.

FROM FIELDS TO TRUCKS After it was established in Nigeria in 1989 as an exporter of cashew nuts, Olam expanded by targeting niche commodities, such as cocoa and coffee, where there were fewer competitors, building up sourcing capabilities in Africa and elsewhere.

In the central African country of Gabon, the company has introduced drones to map out plantations to help detect floods, nutrient deficiency and water stress -- a task that has traditionally required human labor and sometimes a helicopter.

In Australia, internet of things technology has helped cut water use at Olam's almond farms by more than 10%. Devices affixed to trees measure minute changes in trunk diameter and automatically provide just the right amount of water to keep them healthy.

In logistics, the company plans to launch its Olam Inside program by next March. Under the program, agricultural goods will be tagged with memory chips containing information on everything from the amount of water used to grow them to the size of the carbon footprint made by their transportation.

Global food and beverage manufacturers, the bulk of Olam's customers, are hungry for such information as they come under public pressure to boost the sustainability of their businesses.

"The transparency adds value to the end product, allowing Olam to sell the produce at competitive prices to food manufacturers," McLeish said.

WIDER TREND Olam's tech initiatives are in line with global trends in the commodities sector. Goldman Sachs predicts that the rise of precision farming, which includes the deployment of drones and data analysis, will expand the overall market for farming tech to $240 billion by 2050.

Olam, meanwhile, along with Louis Dreyfus and Cargill, is a member of a blockchain consortium that is working with IBM to create a supply chain and trading system for cotton. Keisuke Sano, a consultant at Nomura Research Institute, said Olam's strength lies in its ability to adopt smart technology to its wide array of agricultural goods and throughout its supply chain down through to the sale of the products.

"Often times, only large-scale farmers with resources that allow them to take risks are willing to work with tech integrators and adopt new technology, because the results are often not immediately visible," Sano said. "Because of Olam's global network of supply chains, the company can roll out and analyze the effects of smart tech on a much larger scale in a more immediate manner."

Verghese's plans for smart agriculture extend beyond the original business of procuring and selling commodities. Under the Olam Direct program, he is working to launch an online marketplace where small-scale farmers can sell their products, as well as search for service providers such as banks, insurers and manufacturers of fertilizers and agrochemicals.

This marketplace will be open to farmers outside of Olam's network, Verghese said. He believes Olam can provide opportunities for companies by tapping into its network of farmers, including those in developing countries -- a demographic that is often hard to reach. An Olam employee at a cashew warehouse in Bouake, Ivory Coast.   © Reuters

While revenue is still an open question, Verghese is confident that Olam can eventually dominate the agriculture sector.

"It's a winner-take-all [business]. It is someone who can create that network [who can win]," Verghese said.

MANAGING RISKS Mervin Song, an analyst at DBS Group Research, said Olam's use of IT and big data can give the company "an informational advantage" that can be helpful in mitigating the risks of volatility in commodity prices.

Adopting digital initiatives that benefit both farmers and customers provides other forms of risk management for Olam, too. The company's stock price fell last year after environmental group Mighty Earth alleged that its development of palm oil plantations in Gabon was contributing to deforestation.

Olam later took Mighty Earth members on a site visit to Gabon, and the two sides reached an agreement under which Olam will freeze the clearing of land for new plantations in Gabon for at least a year while they work together on forest conservation efforts.

"People who attack us get good value from attacking a company like Olam because we are high profile. It is the civil society's job to keep us honest," Verghese said. "But as long as you are doing the right thing, you can defend it and properly explain." 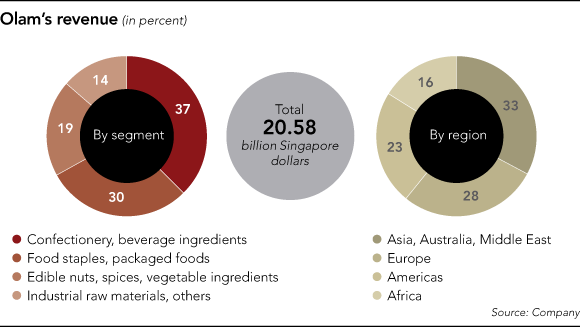 Olam is given some insulation by its three major investors: Singapore state investment fund Temasek Holdings, Japanese trading house Mitsubishi Corp., and Singapore-based conglomerate Kewalram Chanrai Group, which is also Olam's co-founder. Mitsubishi, the second-largest investor in Olam, took a 20% stake in 2015 as a strategic investor.

Temasek, Olam's majority shareholder, came to the rescue when it was under attack in 2012 by short-seller Muddy Waters. The U.S.-based research company, known for investigating fraud and irregular corporate activities, had criticized Olam's accounting and acquisition practices, and its share price soon fell more than 20%.

Olam's stock price has been on an upward trend over the past few months, but it sits at roughly where it was five years ago. And while the company's quarterly revenue has been slowly rising since late last year, its bottom line has been stagnant. Nevertheless, some analysts view that as a sign of stability.

"Agriculture is a long-term business, as it takes years for trees to produce," said one analyst at an international broker. "Measuring a company by five-year share-price movement, as an investor would for other companies, may not be appropriate." 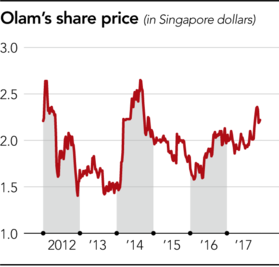 Song, the analyst at DBS Group Research, said Olam is on track to become cash-flow positive, something that was delayed by the company's $1.2 billion acquisition of Archer Daniel Midland's cocoa business in 2015. He added that with the company's improving cash position and the expected proceeds from an upcoming exercise of warrants, there is a chance that Olam will consider another large-scale acquisition.

Verghese did not mention specific any investment plans, though he did refer to the company's efforts to build up its online marketplace. "This will take some time, but we are investing," he said.

While Verghese did not disclose the amount of investment in Olam's digitization efforts, he said the company has built a "significant" digital team. "We probably have the largest farmer network in the world. We think we are in a good position to create the platform."