Company in focus: Singtel stakes its future on going way beyond telecommunications SINGAPORE At Singapore Telecommunications' headquarters in the heart of this city-state, nearly a dozen engineers huddle around computer screens, monitoring the health of the country's computer network. In this small corner room decked out like a governmental intelligence agency's command center, a wall full of screens -- one projecting a map of the world and another of Singapore -- display real-time information on cyberattacks. Armed with cutting-edge technology, the center keeps watch over the computer networks of a wide variety of global customers -- companies, government agencies and other organizations -- to protect them from an increasing number of cybercrimes. Experts in Singtel's other security centers, from Sydney and Tokyo to Chicago and Warsaw, work closely with each other to provide around-the-clock service. In a move to widen its customer base in Asia, Singtel opened its ninth security center in Manila in March in a partnership with Globe Telecom, in which the Singapore state-linked company holds a 47% stake.

This network of centers is the result of Singtel's acquisition in 2015 of a 98% stake in U.S.-based Trustwave Holdings for $770 million as part of its goal to be "a global player in cybersecurity," as Chua Sock Koong, Singtel's group chief executive, said at the time of the deal.

To survive in the era of technology disruption, Singtel has shifted its growth strategy from investing in overseas telecom companies to expanding its digital businesses. The question now facing Southeast Asia's largest telecom operator by market capitalization is whether its strategy as a disruptor itself will succeed.

THREAT ASSESSMENT Singtel reported on Nov. 9 that its net profit for the quarter ended September nearly tripled to 2.88 billion Singapore dollars ($2.11 billion) from the same period a year earlier, its highest quarterly net profit ever. The company attributed the jump to an exceptional gain of S$2.05 billion from the sale of its stake in NetLink Trust, a Singapore fiber-optic network operator. Excluding the exceptional gain, Singtel's net profit declined 4.1% due to a weak contribution from its Indian affiliate, Bharti Airtel. 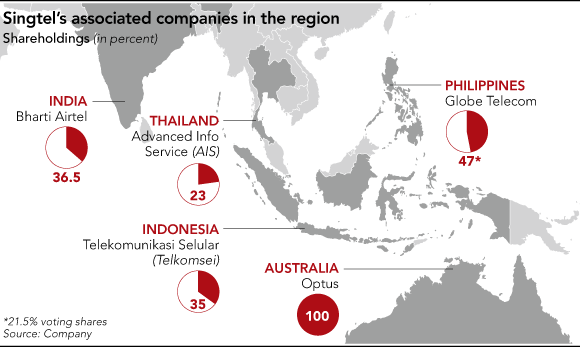 Singtel's information-communication technology operations, which includes cybersecurity, and its digital business segment together made up a quarter of the company's total revenue for the July-September period. "It is a confirmation of the ... momentum that we are seeing in our digital efforts," Chua told a press conference on Nov. 9. 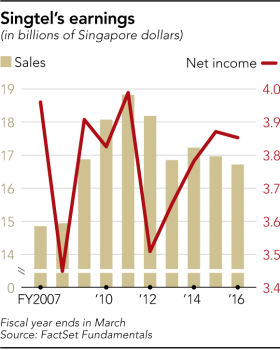 Singtel's sales from its cyber-defense business for the year ended March 2017 grew 84% to S$473 million from the same period a year earlier. For the fiscal half-year ended September, growth slowed to 3.3% from the year-earlier period, but the company expects that pace to speed up, with the segment's revenue reaching between S$550 million to S$650 million for the current fiscal year ending March 2018.

Asian businesses have lagged in addressing cyberthreats compared with their Western counterparts. It took organizations in the Asia-Pacific region 172 days, or 1.7 times longer than the global median of 99 days, to discover a security breach last year, according to a report by U.S. cybersecurity company FireEye. And threats are growing. Last year, $81 million was illegally transferred from a Bangladesh central bank foreign-reserve account at the Federal Reserve Bank of New York, and major international cyberstrikes earlier this year -- by ransomware dubbed "WannaCry" -- affected Asia as well.

Seeing an opportunity, Singtel has tied up with FireEye and Palo Alto Networks, both California-based cybersecurity companies, in an effort to gain the latest technology. Singtel also is looking to tie up with its subsidiaries in India, Indonesia and Thailand -- as it did in the Philippines -- to offer advanced cybersecurity services in other Asian markets.

CROWDED FIELDS The ongoing technology disruption has hit the telecom industry particularly hard. Traditional telecom companies now face competition from instant-messaging services for voice and video calls and texts, as well as in data communication. People today use messaging applications to communicate with anyone whenever and wherever. As a result, telecom operators' revenues in international roaming, voice calls and short-messaging services have evaporated.

"The business we are in can totally disappear," Chua told the Nikkei Asian Review in an interview in August.

Singtel wants to be a disruptor itself in other industries. The company, which is 52%-owned by Singapore government investment company Temasek Holdings, is staking its claim in the businesses that it can leverage with its telecom network. Accomplishing that goal has meant a dramatic shift in its strategy. Singtel's source of growth for years had been in overseas expansion, which was necessary because of its small home market. With its ample coffers, Singtel invested in such telecom companies as Optus of Australia, India's Bharti Airtel, Telekomunikasi Selular of Indonesia, Thailand's Advanced Info Service, in addition to Globe Telecom of the Philippines.

Those companies, based largely in emerging Asian countries where mobile-phone penetration was growing rapidly, provided Singtel with its much-coveted growth. In the fiscal year ending March 2017, Singtel's overseas businesses contributed 70% to its net profit.

Over the past five years, however, the company has switched its core strategy from a horizontal expansion to a vertical one as attractive acquisition opportunities dried up. Singtel's extensive telecom assets in the region were at risk of turning into potential liabilities.

Singtel is not the only telecom company entering nontraditional businesses. NTT Docomo of Japan and South Korea's SK Telecom are hailed as digital forerunners, and Taiwan's Chunghwa Telecom has partnered with Fox Networks Group of the U.S. in entertainment production and streaming services. India's Reliance Jio Infocomm, part of the conglomerate Reliance Industries, has bombarded the market with a range of digital services, including e-commerce, mobile payment and Bollywood video streaming.

"Singtel is at the front of the pack in the Southeast Asia region," said Jake Saunders, vice president of Asia-Pacific and advisory services at ABI Research.

Singtel intends to take advantage of the network of telecom operators in which it has stakes. The regional video-on-demand streaming service HOOQ -- a joint venture between Sony Pictures Television, Warner Bros. Entertainment and Singtel -- is available in the Philippines, Indonesia, Thailand and India through Singtel's affiliated companies. Through all its group companies, Singtel has access to 670 million mobile customers in 22 countries. "Digital services cut through [national] boundaries unlike traditional telco businesses," Chua said in the August interview. 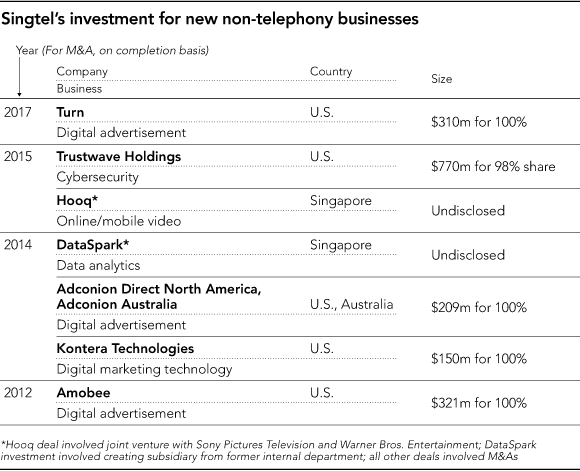 Digital advertising represents another key business for Singtel, which it has bolstered through its Amobee unit.

"We went into digital advertising and digital marketing, because while entertainment is increasingly moving to mobile, the advertising spending was still mainly in the traditional media," Chua said in the interview. "We saw that as a very good opportunity."

While Singtel has spent nearly $1 billion in acquiring digital advertising companies, it has also recorded hundreds of millions of dollars in losses in those businesses. Though some acquisitions, like Amobee, have started to break even.

MOVing UP, AND OUT Some analysts are taking a positive view. Sachin Mittal, a telecom analyst at DBS Bank, said Singtel's stock price has been "flattish" over the past three years, and its valuation is lower than its Singapore rival StarHub and other regional peers, which he attributes to "mounting losses in digital services." But Mittal expects this valuation discount to disappear. 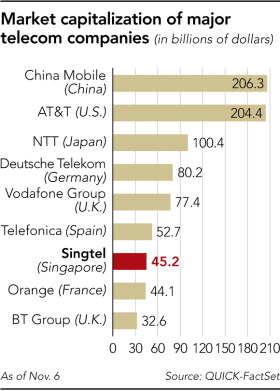 "Robust digital offerings on top of network access will be a major competitive advantage in the 'internet of things' era," he said. Mittal expects that the revenue from Singtel's digital businesses will double in the next five years, contributing 20-25% of total revenue, compared with 9% in the quarter ended June.

Other analysts were less optimistic of Singtel's strategy. "They are generating revenue, but can they generate the profitability required to get a return on investment?" said Dan Baker, equity research director of Morningstar Investment Management Asia in Hong Kong. "And if they do, will they have the required competitive advantages to sustain the returns?"

Mitchell Kim, head of Asia internet and telecom equity research at Maybank Kim Eng, also struck a skeptical tone. "When telcos did try to invest in new areas, they were hopelessly lacking vision and knowledge," Kim said. "The key question to ask is, what does Singtel bring to the table other than capital?"

Singtel is also competing against major global players in the crowded video-streaming market. Those companies can "spin out" services with their global reach, ABI's Saunders said, while telecom companies "tend to be more confined in [their] own domestic market and struggle."

Even in Asia, Malaysia's iflix -- in which the Philippines' largest telecom company, PLDT, has a stake -- is expanding and moving further into the Middle East and Africa. Competition in the region also comes from pirated videos. Singtel faces another challenge in pursuing new businesses with the shortage of staff with technical know-how. In cybersecurity, Singtel has 2,000 professionals worldwide, with the majority of that group joining through the Trustwave acquisition, but it still has to build up its local staff. To address that problem, it set up a research laboratory together with the National University of Singapore with an investment of S$42.8 million and is reaching out to students through scholarships. But the benefits of these efforts will take time.

Chua said she wants Singtel to be known as a digital or technology company, rather than a telephone or communications business.

"It is an exciting journey, born out of necessity," Chua said. If Singtel does not change, she added, "We will see ourselves becoming totally irrelevant."