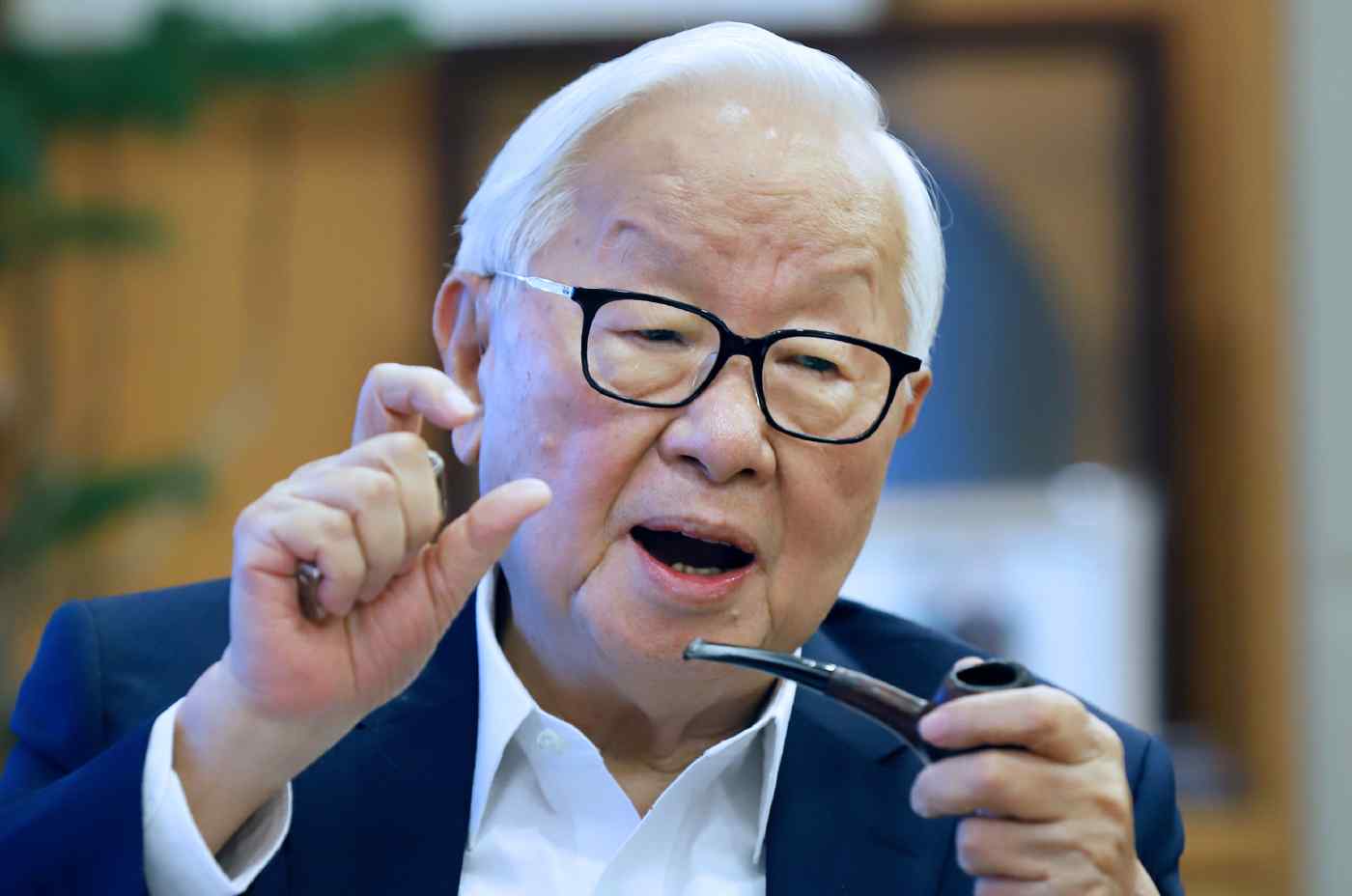 HSINCHU, Taiwan For the first time in 30 years, Taiwan Semiconductor Manufacturing Co. will have to forge ahead without its founder.

Morris Chang, 86, will step down after TSMC's annual general meeting next June. The company was founded in 1987 and is today the world's largest contract chipmaker by revenue and market share. It is the sole chip supplier for Apple's new iPhones.

TSMC has benefited from a healthy demand for chips in smartphones and next-generation technologies, including connected devices and artificial intelligence.

Chang has indicated that the biggest challenge the company will face after his retirement will come from competition, not market conditions, as chips remain essential components that serve as the brains for electronics. He announced his retirement and succession plan on Oct. 2.

CHINA STILL LAGS But China, Chang told Nikkei Asian Review in an interview, is unlikely to catch up with TSMC and other market leaders in the short term, despite an aggressive buildup of its own chip technology with ample financial support from the government.

"It could take several years for China to yield results from its semiconductor efforts," Chang said. "Substantial investments to build capacities or to pour money into research and development does not mean China can create chip technology quickly." 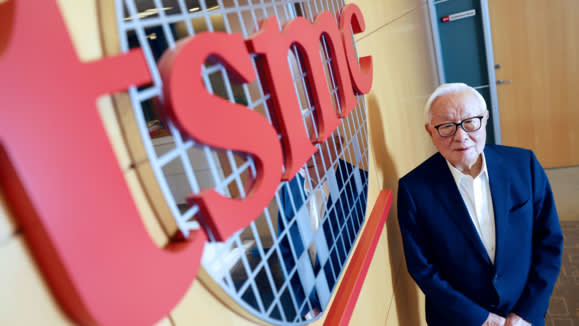 "It's not possible to only rely on substantial investments to rapidly gain leading-edge technology and achieve cost reduction. One really needs accumulated experiences," Chang said, adding that global chip leaders in South Korea, Taiwan and the U.S. have gained substantial experience, and "it won't be easy for China to play catch up."

To bolster China's self-sufficiency in meeting demand for its vast market, Beijing is currently injecting more than 1.2 trillion yuan ($180 billion) over a 10-year period to build a domestic semiconductor sector.

Since China still needs to rely on foreign supplies of chips, TSMC is building an advanced 16-nanometer chip production facility in the Chinese city of Nanjing for its mainland customers. The 16-nanometer chips are used in iPhone 7 models.

Chang also said that while Taipei's ties with Beijing have cooled since last year's inauguration of pro-independence Taiwanese President Tsai Ing-wen, TSMC's relations with its Chinese customers have not been affected.

SAMSUNG CLOSES IN While Chang appeared to dismiss growing Chinese competition as a possible near-term threat, he was much more cautious about taking on South Korea's Samsung Electronics over cutting-edge semiconductor technology.

"There is no way to be sure [that we still stay ahead]. We try our best. We work our hardest. We think the hardest," Chang said when asked whether TSMC will overpower Samsung in advanced 7-nanometer chips, which are due to come out next year.

Nanometer refers to the size of transistors on chips -- the smaller they are, the more advanced and powerful they are, but also more challenging to make.

TSMC and Samsung have been battling for orders from first-tier customers such as Apple and Qualcomm. One key to winning over these top companies is having the most advanced chip technology.

The Taiwanese chipmaker has dominated orders for core processors for Apple's iPhone range this year and last year, while Samsung managed to win some orders from Qualcomm for baseband chips since 2015. Baseband chips allow smartphones to make phone calls. 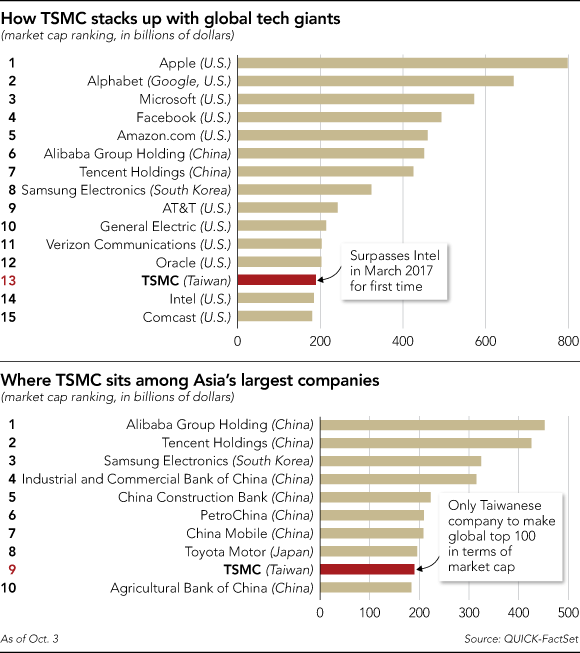 TSMC, with a market cap of $191 billion, boasts about 450 customers, including Qualcomm, Nvidia, Broadcom, MediaTek, Huawei's HiSilicon Technologies and NXP, controlling about 56% of the global foundry market.

Foundry -- the making of chips for other companies -- is a business model pioneered by Chang at TSMC. Before TSMC came along, chip companies would design and make chips in-house.

Samsung currently controls less than 10% of the global foundry market, but aims to grab 25% within five years.

Mark Li, a Hong Kong-based analyst with Sanford C. Bernstein, said that Samsung may indeed have an opportunity to fight it out over technology with TSMC over the next two years.

"When TSMC and Samsung begin to use advanced extreme ultraviolet lithography technology to make 7-nanometer chips in late 2018 or in 2019, Samsung and TSMC may have an equal chance to win the battle," Li said, adding that Samsung has continued to invest significantly in its foundry business, even though it previously has not been performing well.

Over the past three decades, Chang has attributed his company's success to its customers, because as a foundry that does not have products under its own brand name, expanding the business depends on finding winning clients.

"Why did TSMC become so successful? We seemed always to be able to find the right partners over time. ... Like in graphic [processing], we have Nvidia, and in the mobile era we have Apple and Qualcomm," Chang said.

Yet market watchers are concerned whether there might come a point where TSMC will no longer be able to enhance its technology beyond 3 nanometers. The issue is a problem with physics.

In 1965, Gordon Moore, who helped found Intel, noted that the number of transistors that can be squeezed into a chip will double every two years on average, and that corresponds to advances in computing power and drops in cost.

Chang appears unfazed. He said now that transistors are taking longer than two years to double, the time element in Moore's law "has broken down."

TSMC is planning to build its advanced facilities for 5-nanometer and 3-nanometer chips in the southern Taiwanese city of Tainan.

Chang said that he handed over the responsibilities for customer relations to Wei and Liu after they became co-chief executives in 2013, and that Chang himself has cut back on overseas travel over the past four years as the two leaders have been making the necessary trips instead.

The succession arrangement, while not unexpected, still rattles TSMC partners. 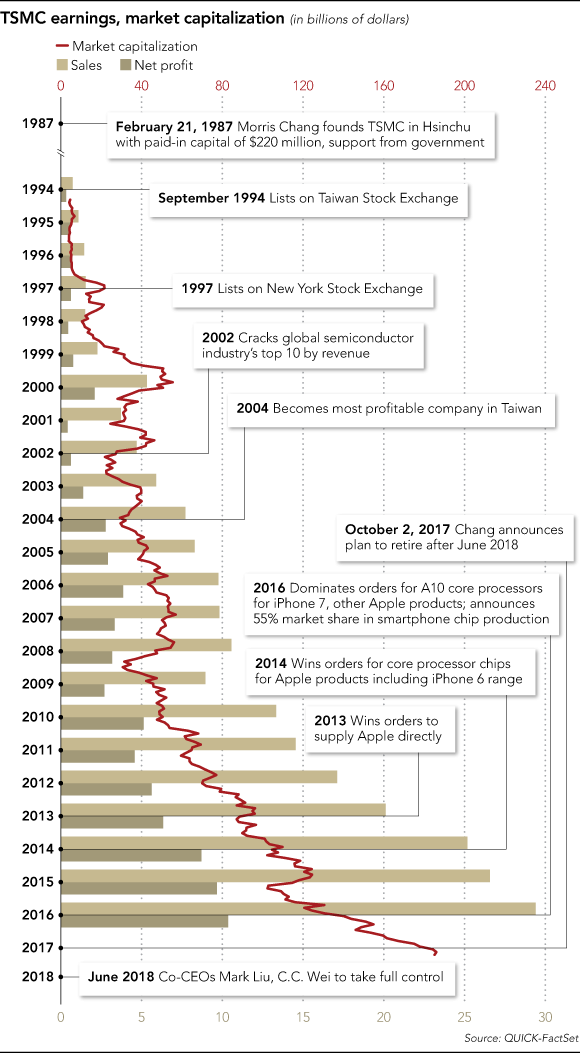 "It's a very complicated task to negotiate with every customer about the pricing, plan capacities, and make judgments about which customer would be more successful bringing in more orders to the company later. Chang has been really astute in making those decisions and grabbing new opportunities over the decades," an industry executive told the NAR.

"It's extremely difficult for anyone to take over from such a visionary and charismatic leader. We are concerned whether Chang's successors could really manage to keep all the important customers and find new ones," the executive said.

Others in the industry are also quietly cautious about exactly what will happen once the current board, handpicked by Chang, leaves after they serve another three-year term starting next June. Still, most analysts and semiconductor executives are not expecting a major shake-up anytime soon.

"We don't expect there will be any major change in the next two to three years with the current succession plan," said an executive of a TSMC supplier.

Li of Sanford C. Bernstein noted, "We expect a gradual transition as Chairman Morris Chang won't step down until next June and all directors of the board likely will remain unchanged for three years after that."