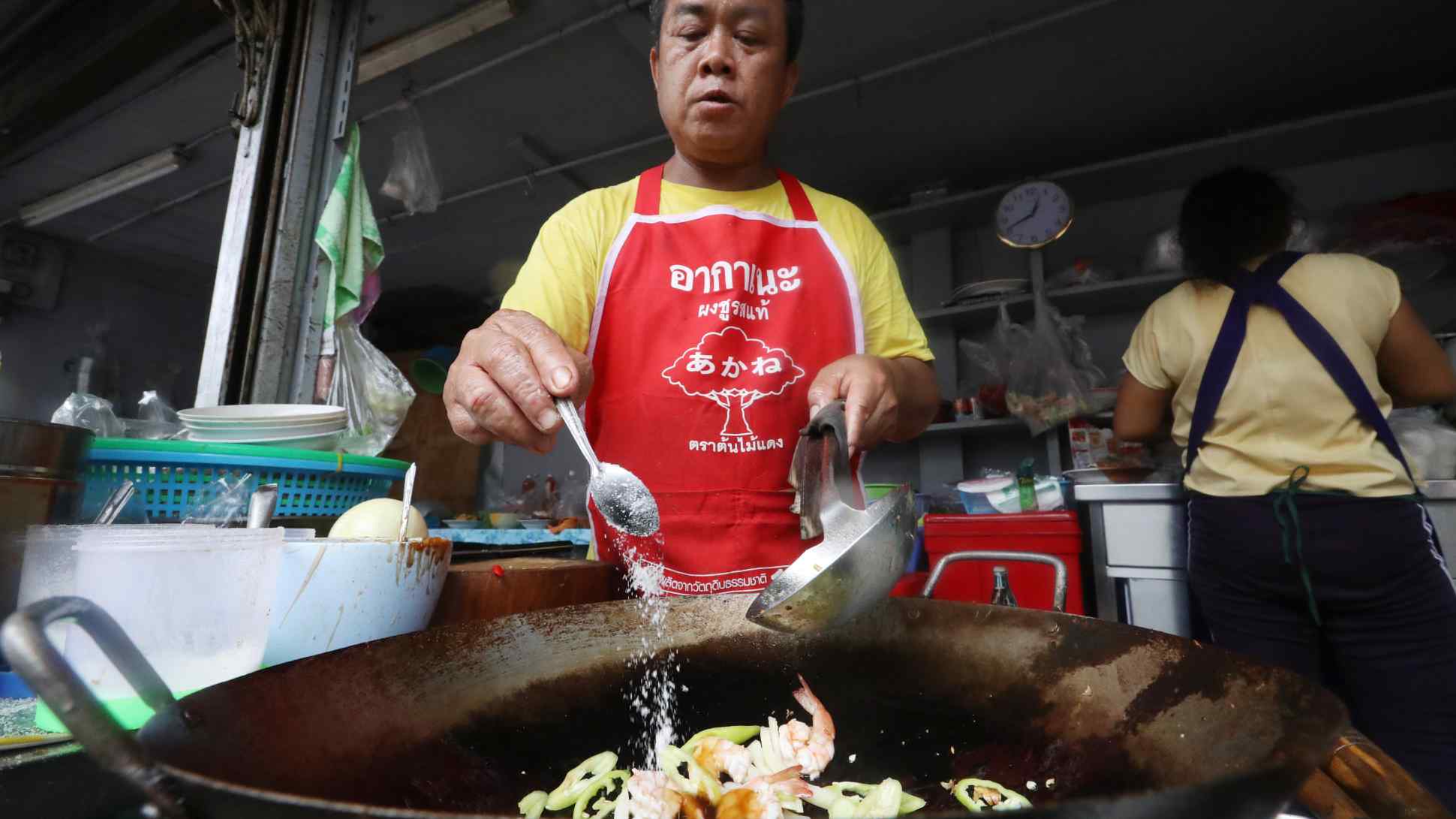 A chef drops a spoonful of Ajinomoto's namesake flavor enhancer into a pan in Bangkok. For decades, MSG has been dogged by suspicions that it is harmful to health. (Photo by Rie Ishii)
Company in focus

TOKYO -- Mothers may know best, and sometimes even Richard Nixon, but one homemaker near Tokyo ignores their advice when it comes to MSG.

"My mother used to tell me Ajinomoto is a chemical seasoning that's bad for your health," said the woman in her 60s, using the Japanese brand name of the flavor enhancer. "But Ajinomoto is a vital essence for my recipes. I just can't imagine how to cook without it."

The company behind the brand, also called Ajinomoto, is determined to persuade more home cooks to bring its monosodium glutamate crystals into their kitchens.

Ajinomoto already controls 80% of Japan's seasoning market and supplies 20% of the MSG consumed worldwide. It also has a vast product portfolio ranging from sauces and frozen pot stickers to mayonnaise and instant coffee, generating annual sales of around $10 billion. But it harbors much bigger ambitions.

In the next five years, Ajinomoto aims to crack the top 10 of global foodmakers, challenging the likes of Nestle, which rings up nearly 10 times more sales. To reach that level, experts say, the company must first bust what some insist is an urban myth: that MSG causes headaches, sweats, heart palpitations and other symptoms.

"Ajinomoto needs to sweep away its persistent negative image to achieve its goal," said Hidetomi Tanaka, executive director at consultancy Interbrand Japan, which conducts branding evaluations for the company.

Ajinomoto has been trying and failing to shed that image for five decades. Now it hopes a $10 million global campaign featuring social media influencers will put the MSG controversy to rest for good. Ajinomoto wants to put more of these bottles in the world's kitchens.   © Reuters

The notorious yet ubiquitous flavor booster was discovered over a century ago by Japanese chemist Kikunae Ikeda, a professor at what is now the University of Tokyo. His search for affordable nutrients to feed Japan took him to Germany in 1899. Instead, after returning home and experimenting with the kelp used in Japanese dashi soup stock, he zeroed in on a substance that made food taste better.

"If I can make cheaper seasoning," Ikeda later reasoned in his memoirs, "and if that can make cheap but untasty food delicious, I can help improve Japanese people's malnutrition." He applied for a patent in 1908.

Ikeda found a keen business partner in Saburosuke Suzuki, the founder of present-day Ajinomoto. The two men struck a patent-sharing deal and Suzuki began marketing the product in 1909 under the name Aji-no-moto, which translates to "essence of taste."

The first newspaper ad billed Aji-no-moto as a "revolution in the food industry" and featured a woman holding a bottle. Housewives embraced it and, in 1927, so did Japan's Imperial household. By the 1960s, Ajinomoto had reached overseas markets including the U.S., the Philippines, Thailand, Malaysia and Indonesia.

Then, in 1968, a letter published by the New England Journal of Medicine in the U.S. sparked a battle the company is still fighting. An early advertisement for Ajinomoto. (Courtesy of Ajinomoto)

The letter, signed by Dr. Robert Ho Man Kwok, was titled "Chinese Restaurant Syndrome." Kwok claimed to experience "numbness" after eating at such establishments and speculated it might be "caused by the monosodium glutamate seasoning used to a great extent."

A flurry of letters and media reports followed. In 1969, the issue reached President Nixon's White House, years before his world-changing trip to China and sudden resignation. Nixon's nutrition consultant recommended that MSG be removed from baby food.

Another study suggested MSG might cause brain damage. And as the fears spread, Ajinomoto's sales suffered. In 1980, annual MSG consumption in Japan came to 592 grams per head, down 24% from the peak of 782 grams in 1969.

A woman in her late 50s recalled how Ajinomoto disappeared from the dinner table. "Our family used to buy Ajinomoto by the kilo and put it in everything when I was little," she said during a recent tour of the company's facility in the Tokyo suburb of Kawasaki, where 120 products are packaged for sale and 70% of its 1,700 researchers work. "Suddenly that changed as the story that Ajinomoto was bad for your health caught on."

Sifting MSG facts from fiction, however, is a tricky business.

Regulators have found scant evidence to support the health worries. In 1980, the U.S. Food and Drug Administration reiterated that the product is "generally recognized as safe." Others, including the United Nations, have also deemed it safe.

"Although many people identify themselves as sensitive to MSG, in studies with such individuals given MSG or a placebo, scientists have not been able to consistently trigger reactions," the FDA notes on its website. 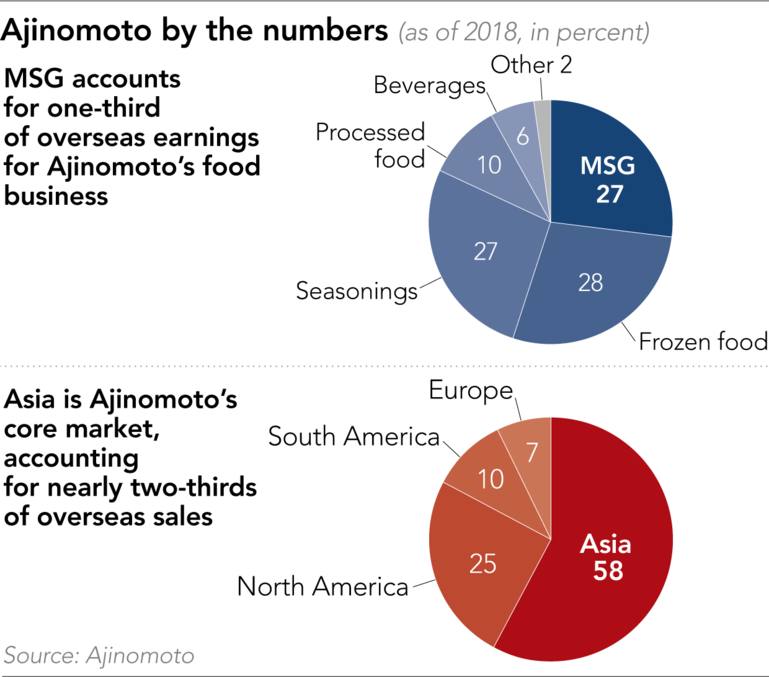 Some researchers say the Chinese Restaurant Syndrome scare was fueled by anti-Asian prejudice. Historical links between Chinese food and racism in the U.S. provide "important context for tracing the trajectory of narratives that surrounded MSG," Jennifer Lin LeMesurier, a professor at Colgate University in New York State, wrote in a paper.

There has even been doubt over the provenance of the original letter. A Dr. Howard Steel confessed to LeMesurier that he wrote it to win a bet -- a story that seemed plausible until the public radio program "This American Life" looked into it. The program more or less confirmed this year that the letter really was penned by a Chinese American doctor named Kwok.

"I never thought my research on MSG would lead to any of this," LeMesurier told the Nikkei Asian Review. "This whole experience has been a lesson for me in terms of how we tend to judge 'scientific authority' and how that definition can shift completely depending on how you view the world."

Through it all, Ajinomoto defended its namesake while building other businesses -- processed and frozen food, health care, animal feed. It set up a lab for safety research in 1970, and countered claims that MSG is a chemical concoction.

MSG occurs naturally in many foods, including tomatoes, cheeses and even breast milk. In Ajinomoto's case, factories in places like Thailand and Brazil extract glucose from sugar cane molasses and use a microbe to turn it into glutamic acid.

The company "needed to speak out that our product is safe," said Kumiko Ninomiya, an adviser to Ajinomoto who holds a doctorate in agriculture. Yet, the assurances did little to shake the distrust.

A potentially big break came in the early 2000s with the "rediscovery" of umami -- a fifth taste after sweet, sour, salty and bitter.

Ikeda himself had coined the term, derived from umai, a Japanese word meaning delicious. About 100 years later, studies confirmed the presence of umami taste receptors that respond to glutamate and, as a result, Ajinomoto's flagship product. Soon, umami was all the rage in the food business.

This was vindication for Ninomiya, who had been trumpeting umami since joining Ajinomoto in 1982. Due to the anti-MSG movement in the U.S., she explained, the company had avoided lumping umami and MSG together, when in fact they are inextricably linked. "What consumers might not know now," Ninomiya said, "is probably what we have not actively said."

Ajinomoto is saying it now. But it should tread carefully, warned Shizue Kishi, a professor at Tokyo Keizai University.

"Leveraging the word and concept of umami is a clever idea," she said, since it associates MSG with something positive and trendy. But the strategy could stir suspicion if consumers "think the company is distracting their attention" and ducking questions on safety.

And so far, the umami hype has not helped that much. "While umami has received high evaluations, the negative image of MSG remains," Ajinomoto President and CEO Takaaki Nishii lamented in July.

Management hopes the $10 million, three-year promotional campaign launched in 2018 will change that.

The company, which employs over 34,000 people, declined to give specifics. But the bulk of the money will go toward events, advertising and sponsored content on YouTube, blogs, Facebook and BuzzFeed, often involving food experts and nutritionists. Interbrand's Tanaka noted that Ajinomoto wants to align itself with influencers who are close to consumers, rather than scientists and PR professionals.

Michelle Dudash -- an American registered dietitian, Cordon Bleu-certified chef and working mother -- is one. She crafts easy recipes for busy parents and has written Ajinomoto-sponsored posts on her blog.

The relationship has drawn "no negative feedback" from readers, Dudash said. "I think the fact that I eat MSG myself and give it to my own family without reservation says a lot."

Not all MSG proselytizers are paid by Ajinomoto. Ryuji, a Japanese food influencer with over 770,000 followers on Twitter, sings its praises despite a sprinkling of angry responses.

"MSG reduces cooking time and makes it possible for everyone to prepare tasty food," Ryuji told the Nikkei Asian Review. "It's a pity some people still believe MSG is bad without any proof."

To further spread the word, Ajinomoto hosted the World Umami Forum in New York last September, bringing 230 nutritionists, chefs and other industry insiders together to learn about MSG. Some came from Indonesia, Thailand, Vietnam, China and the Philippines. Afterward, 63% of the registered dietitians who participated said they had a positive image of MSG, up 11 points from before the forum, according to the company.

Tanaka believes the event was a crucial step for Ajinomoto to become a bigger global brand, since its expansion hinges on MSG.

When Ajinomoto enters a foreign market, it typically starts out with its "competitive" flavor crystals before offering more expensive seasonings, sauces and other products, said Hiroshi Saji, senior analyst at Mizuho Securities.

Increasing sales of higher-value items in growing markets like Southeast Asia is the path to stronger earnings. Net profit for the fiscal year through March came in at a low 29.6 billion yen, after Ajinomoto booked impairment losses stemming from poor performance in North America and Turkey.

Saji said polishing MSG's image should enhance the entire company's reputation and ultimately boost sales of more profitable products. But he also cautioned that Ajinomoto could easily become a target of its own social media weapons.

If dubious information spread quickly in the 1960s, it is even more explosive today. "In the age of social media," Saji said, "it has never been more important for the company to deal with the risk." 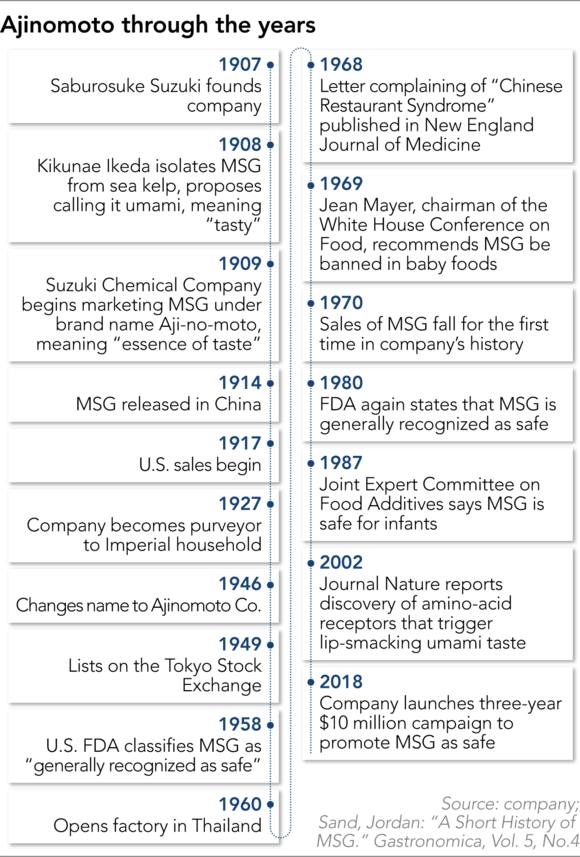