BANGKOK -- While cutting costs and frills has been the main strategy for small regional airlines in Asia's increasingly crowded skies, Thailand's Bangkok Airways has been playing a different game.

Describing itself as a "boutique airline," the mid-sized carrier boasts an extensive range of complimentary services such as airport lounges for all passengers, including those in economy, and hot meals on every flight, even for journeys that take less than an hour.

Founded as a chartered flight operator in 1968 by President Puttipong Prasarttong-Osoth's billionaire father, Prasert Prasarttong-Osoth, Bangkok Airways has gained a unique position over the years by developing a niche between international full service and low cost. It is reported that Prasert, who was from a family of doctors, saw potential demand in chartered flights when he was running a resource exploration related business in the Gulf of Thailand.

The airline once operated several big aircraft and flew long-haul routes to Europe and Japan. But it dropped them during the mid-2000s when fuel prices surged and it switched its focus to short and mid-haul routes.

Bangkok Airways adopted its current business model nearly 20 years ago when LCCs began expanding in the Thai market. The new entrants offered cheap fares on short and medium routes. In response, Bangkok Airways decided to focus on non-budget travelers who were willing to pay a little bit more for comfort.

"We had to let the public know that we still offered full service," Puttipong who is also a pilot recently told Nikkei Asian Review. "That's why we named ourselves Asia's boutique airline, just like a boutique hotel that is small but very cozy, welcoming and unique." Further setting itself apart from low-cost carriers, Bangkok Airways has concluded a series of codeshare partnerships with larger international airlines to provide better connection for passengers traveling beyond its own network. There are now 22 codeshare agreements, ranging from Emirates and Japan Airlines to British Airways and, recently, state-owned Thai Airways International. "Now we make friends with other airlines that can do it better," said Puttipong.

The company is expecting to strike four more deals this year, including one with a Chinese airline. Some 25% of its passenger revenue is expected to be generated from flights booked through partner airlines in 2017, up from 22% last year.

"We should keep to areas where we perform best, [which are] on domestic and regional routes," said Puttipong.

Thai AirAsia, the country's leading LCC, has grown rapidly but other full-service and budget airlines have been struggling in a fierce price war.

Thai Airways, which is also facing price competition from Middle Eastern airlines, posted three straight years of losses until it made a marginal profit in 2016. Nok Airlines, Thailand's second largest LCC, has also suffered losses for the past three years. Bangkok Airways, on the other hand, has been delivering stable profits since it was listed on the Stock Exchange of Thailand in 2014. Net profit last year amounted to 1.768 billion baht ($51.4 million), down 1.6% from a year earlier due to a one-off corporate tax payment. Operating income was up 22%.

Bangkok Airways also managed to enjoy a higher profit margin than its local competitors at 6.4%, although its load factor of 69% was less than that of Thai AirAsia at 84% or Thai Airways at 74%.

"Bangkok Airways is not focusing on the load factor because its tickets are not cheap," said Amnart Ngosawang, an analyst at KTB Securities in Bangkok. "They could easily achieve a higher load factor if they lowered the price but that would only result in a lower margin."

One reason the airline has managed to avoid price competition is that it flies to three airfields owned and operated by itself: Samui Airport located at Koh Samui in the Gulf of Thailand, Trat Airport near the Cambodian border, and Sukhothai Airport serving the ancient city of Sukhothai in the north.

Samui Airport, built at an estimated cost of 800 million baht and opened in 1989, has been notably successful. The island continues to draw tourists partly because its rainy season pattern is different from other major Thai resorts such as Phuket.

Bangkok Airways dominates air service to Samui, although some flights are also offered by Thai Airways and the Silk Air division of Singapore Airlines.

"To own the airport means that they have full control over everything such as flight quotas and the allocation of time slots," Suwat Wattanapornprom, an analyst at Asia Plus Securities said. "Since the flights are practically dominated by Bangkok Airways, they are able to keep ticket prices high."

Fares on the Samui route, which account for nearly half of the airline's overall passenger revenue, are stable. While the average fares on its Indochina routes dropped by 7% in 2016, Samui fares fell by only 2%. Bangkok Airways entered the airport sector in 1989, shortly after it started operating scheduled flights. There was a regulation then that allotted each route to only one airline, with the most popular routes taken by national flag carrier Thai Airways.

Prasert, who also owns the country's largest private hospital operator Bangkok Dusit Medical Services, decided to build his own airports to get around the rules. His first destination was Samui, which was becoming popular among European tourists, but it could only be reached by boat. The airport proved successful and the airline then opened its two other airports.

The airline's unique network is not only due to its airports. It also flies on routes with less competition, such as from Bangkok to Myanmar's remote capital Naypyitaw. Last year, it launched services to Danang in Vietnam and established routes directly connecting Samui with the Chinese cities of Chengdu, Guangzhou and Chongqing. "Bangkok Airways is good at seeking new markets and unique routes," said Amnart. "But at a certain point, LCCs will try to fly those routes too." For example, the airline used to be the only one offering daily flights between Bangkok and the former Laotian royal capital of Luang Prabang, but Thai AirAsia also now flies there daily as well.

Bangkok Airways "generally has more steady yields given its focus on 'boutique' destinations with less competition," said DBS Group Research in a recent report. "However, there is a rising impact from competition, with 2017 expected to see up to a 3-4% decline [in yield] on average." The company is exploring new opportunities to stay competitive. It plans to increase flight services and add more destinations from Chiang Mai, the popular tourist destination in northern Thailand.

"Passengers can go directly to their next destination from Chiang Mai without flying to Bangkok," Puttipong said. Routes from Chiang Mai to Vientiane, the capital of Laos, and Bagan in Myanmar are being planned.

Although Bangkok Airways still faces the risk of increased competition from LCCs on these routes if they prove popular, the airline's ownership of airports still provides it with an overall competitive advantage. 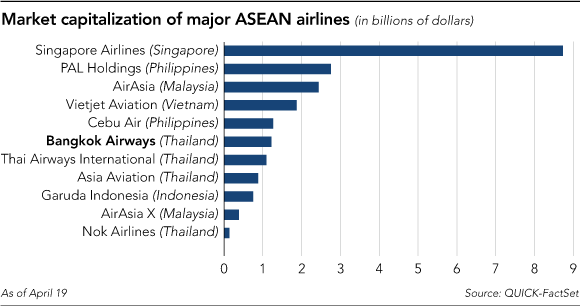 Having built its last airport at Trat 15 years ago, the airline is now considering adding two new airports, with one near Phuket and the other in another country in Indochina. The new airport near Phuket would relieve congestion at the state-owned Phuket International Airport.

Bangkok Airways was listed on SET in November 2014, with a majority of its shares being retained by the founding family. The initial public offering was the biggest in Thailand for 2014 since other proposed listings were delayed due to economic uncertainty resulting from the military coup just months earlier. Although the share price initially fell by 7% below the launch price of 25 baht, it rose in the following months as tourism recovered, and it reached a record high of 26.5 baht in April 2016. But weaker than expected earnings in the latter half of 2016 have caused the share price to fall to around 20 baht.

The recent sluggish earnings performance can be blamed on higher fuel prices and a drop in tourists from China due to Thailand's crackdown on illegal Chinese tour operators, analysts say. "Although Chinese passengers are not yet a significant proportion of Bangkok Airways' customers, Thai AirAsia tried to make up for the loss of the Chinese market by competing in the Indochina market," Suwat said. The death of Thai King Bhumibol Adulyadej in October has also dampened consumer sentiment.

Puttipong, however, sees brighter times ahead. International tourist arrivals in Thailand are expected to grow by double digits in 2017. Bangkok Airways also became the first Thai airline to be recertified by the Thai authorities after the country's certification standards were upgraded following a safety warning from the International Civil Aviation Organization.

"I believe the business environment is still good," Puttipong said. "We have to keep on expanding anyway to maintain growth before our competitors discover potential destinations." But with such heavy investment in developing their own airports, repeating the success story at Samui will be no easy task.