Iconsiam, which opened to the public on Nov. 10, is situated on the west bank of the Chao Phraya River. (Photo by Akira Kodaka)
Company in focus

BANGKOK -- The newest megamall in Bangkok is also the biggest. The retail space at Iconsiam, which opened to the public on Nov. 10 on the west bank of the Chao Phraya River, is more than twice the gross floor area of New York's Empire State Building.

So the 54 billion baht ($1.63 billion) Iconsiam project is more than just another cluster of stores and restaurants. It is a bellwether for the future of Thai retail. It might even help answer a pressing question for companies elsewhere: Is there room for bricks-and-mortar malls in the age of online shopping?

Chadatip Chutrakul, the director of the mall and CEO of principal owner Siam Piwat, seems to like the odds. She was at the center of a flamboyant opening ceremony on Nov. 9 that featured South Korean popstars and other local and international acts. Thousands of people attended, including guests and reporters.

This is clearly a major gamble for Siam Piwat, which now has four malls in its portfolio -- versus more than 30 for rival Central Group and over 10 for The Mall Group. Siam Piwat's other malls are Siam Paragon, one of Bangkok's most successful shopping centers, and two other locations in the city's central Siam district. The family-owned company was established in 1959 and developed Thailand's first five-star hotel, the Siam Intercontinental. Siam Piwat opened its first mall in 1973, and has since focused on shopping centers. In a move that seemed symbolic of its shift toward retail, it tore down the original hotel and built Siam Paragon on the same site. Chadatip took the helm in 2009 upon the death of her father, group founder Chalermchai Charuvastr.

Siam Piwat's new digs stand out not just because of the 525,000 sq. meters of retail space or the accompanying 70- and 52-story residential towers. The huge, gleaming Iconsiam complex has sprouted up on the west side of the Chao Phraya, which is relatively underdeveloped compared with the main shopping districts of Siam and Sukhumvit, situated to the east.

For now, Bangkok residents seem to be welcoming the addition to the west side.

"I rarely go shopping in Siam or Sukhumvit, since they're far from my home whether by car, bike or train," Panarat Thepgumpanat, a 49-year-old office worker from the west side of the city, said before the opening. "Iconsiam is closer to home, so I think I'll shop there often."

Sawanee Ekpunyachai, a 43-year-old office employee, called the mall an "interesting place to visit as the new icon of Bangkok." Japanese department store Takashimaya is an anchor tenant in the new megamall. (Photo by Akira Kodaka)

Roughly 1,000 customers lined up on day one, and high-profile tenants promise to help keep them coming. Upscale Japanese department store Takashimaya is an anchor. The mall also hosts the first official Apple Store in Thailand, along with top British sportswear retailer JD Sports.

But the location has its drawbacks. Iconsiam, which is co-owned with multinational conglomerate Charoen Pokphand Group and CP group company Magnolia Quality Development, lies 1 km from the closest Skytrain station. That may not sound like much, but it is considered a trek in Thailand's hot and rainy tropical weather. Many competing malls have direct access to stations.

A monorail line -- scheduled to open in 2019, according to Chadatip -- promises to mitigate this concern by connecting the mall to the city's other rail transportation. Tenants sound hopeful. Takashimaya believes it is establishing a foothold in an area the Thai government will continue to develop. The Japanese company aims to repeat its success in Singapore, where its department store became one of its most successful overseas investments as the area and city-state grew.

Iconsiam's target clientele also raises risks, though. Managing Director Supoj Chaiwatsirikul said anywhere from 30% to 35% of the expected 150,000 daily visitors are likely to hail from outside Thailand. During certain high seasons, such as the Chinese New Year period, he said the proportion of foreign customers is likely to be in the 40% to 45% range.

This leaves the mall vulnerable to any downturn in tourism -- like the one occurring right now.

Last year, China alone accounted for a third of the 35.3 million arrivals in the Southeast Asian country. But Chinese travelers, famous for their penchant for shopping, have been turning away. Their number has declined for three consecutive months at an accelerating pace: The count dropped 14.9% on the year in September, compared with 11.8% in August and 0.9% in July.

Recognizing the need to turn this trend around, Siam Piwat tied up with Malaysian budget airline AirAsia in October to promote Thailand tourism in China.

Iconsiam's debut comes at a delicate time for Thailand itself, with the economy still recovering from the 2014 coup's impact on consumer sentiment. It also enters a Bangkok market that already has 600 million sq. meters of retail floor area, about 30% more than Tokyo. That figure is only going to rise.

A number of megamall projects are in the pipeline for the next few years. The Mall Group, which runs the Emporium and EmQuartier shopping centers, plans to add another called EmSphere in 2020. TCC group, a conglomerate that owns beer brewer Thai Beverage and developer Fraser Properties, intends to invest 120 billion baht in a retail and office complex called One Bangkok, scheduled to open in 2021. 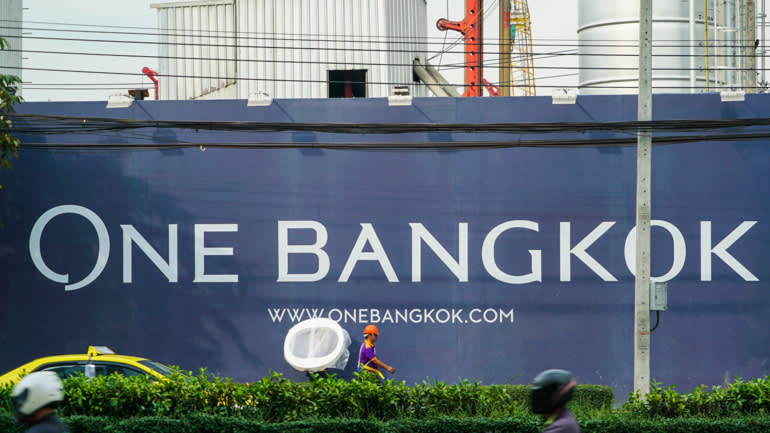 One Bangkok, set to open in 2021, will bring even more competition to the retail scene. (Photo by Akira Kodaka)

All this, on top of Bangkok's over 60 existing malls, makes the city a paradise for Southeast Asian shoppers. There are other places to go on a spree, like Singapore's Orchard Road. But nowhere are stores as heavily concentrated as in the Thai capital.

For mall operators and retailers, however, it has been a while since Thailand seemed like paradise. 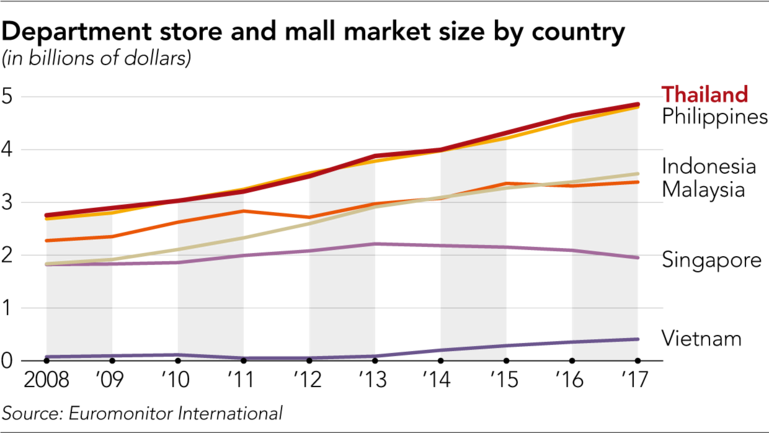 Players like Siam Piwat are banking on further improvement as the political situation stabilizes and the country moves toward restoring democracy with an election next year. This could give citizens more confidence to spend.

A consumer survey conducted in August by the Center of Economics and Business Forecasting, at the University of the Thai Chamber of Commerce, found that Thais were more confident about future economic conditions than at any point in the last 13 years -- and far more than right after the junta took control.

Yet, "purchasing power has not fully recovered," warned Nuanpun Noiruchchukorn, a retail sector analyst at Asia Plus Securities. The mood could darken again if the junta fails to follow through on its promise of an election.

The trade war between the U.S. and China, meanwhile, poses a threat to Thai exporters' profitability and could negatively affect consumers' mindset. Sureeporn Teewasuwet, an analyst at Finansia Syrus Securities, said a slower-than-expected recovery in the economy and purchasing power is the biggest risk to the retail sector.

"We will see more winners and losers in the future," said James Pitchon, executive director at CBRE Thailand.

Even now, shoppers have all but abandoned some malls. The luxury brand-filled Central Embassy, a Central Group shopping center in Bangkok, is one. Some in the media have taken to derisively calling the place Central Empty.

Gaysorn Village, managed by Gaysorn Group and Hongkong Land, finds itself in a similar predicament. On the other hand, there are signs it is still possible to succeed with the right strategy.

Central Pattana, a listed Central Group unit that runs Bangkok's CentralWorld mall, posted a 46.8% increase in net profit for last year and continued to grow at a 43.2% clip this year through June, according to QUICK-FactSet data. Commercial property accounts for over 90% of Central Pattana's business.

Since Siam Piwat is unlisted, it discloses little information about its business and performance.

Operators are looking beyond stores to find a sustainable winning formula. Central Pattana is spending 2 billion baht to renovate its CentralWorld mall by March 2019, focusing on upgrading the food court. The Mall Group in September announced a tie-up with U.S. sports and entertainment company Anschutz Entertainment Group to build concert venues at its facilities.

"I would love to have Beyonce perform at our malls," Mall Group Chairwoman Supaluck Umpujh said.

Iconsiam includes an art museum among its tenants.

Will these extra attractions be enough to overcome the elephant in the room -- the inevitable shift to online shopping?

Thailand lags behind other countries in this regard. E-commerce accounts for 1% of total retail sales now, well below the 20% in most developed countries. The government, however, is promoting digital business under its Thailand 4.0 strategy, and more Thais are gradually buying online.

The country's e-commerce transactions came to 2.81 trillion baht in 2017, up 9.86% on the year, according to the Electronic Transactions Development Agency of Thailand. The agency expects the figure to reach 3.05 trillion baht this year, up 8.76%.

"The physical store is not dead," CBRE said in its report. "But registered retailers need to integrate digitalized shopping experiences in-store to create a seamless 'omnichannel' experience."

Regardless of how Iconsiam fares early on, Pitchon suggested the answers about its fate, and the future of retail, will only come later.