Sihanoukville Autonomous Port is now one of the fastest-growing ports in the region and is undergoing expansion under Japanese aid. (Photo by Akira Kodaka)
Company in focus

SIHANOUKVILLE, Cambodia -- Once a tranquil seaside enclave in southwestern Cambodia, Sihanoukville, or Kompong Som, has turned into a paradise for Chinese investors in recent years. Casinos, hotels, restaurants, massage parlors and supermarkets are festooned in signs in Chinese. More buildings are under construction, fueled by an incessant inflow of Chinese money and people.

Although the city, 220 km southwest of the capital Phnom Penh and named after the country's late king, is becoming a Chinese outpost, the key feature that makes Sihanoukville shine -- the only deep-water seaport in the country -- remains out of Beijing's reach.

The state-owned operator Sihanoukville Autonomous Port, or PAS in its French acronym, has been largely financed by the Japanese government for almost two decades. The port handles over 70% of Cambodia's surface cargo, expanding hand-in-hand with the rapid growth of the Cambodian economy, while being the largest listed company on the local stock exchange. The port also symbolizes the rivalry between China and Japan in the country. Beijing is being frustrated by Tokyo's renewed resolve to further tighten its ties with the port.

On June 25, the port opened its latest extension with the help of Japanese funds. A new multipurpose terminal has a pier with a depth of 13.5 meters, allowing larger cargo ships and bulk carriers to anchor. Another quay is reserved for the country's first oil and gas exploration logistics base. An offshore oil and gas field, discovered in the Gulf of Thailand, is now being developed by KrisEnergy, a Singapore-listed unit of Keppel Corp., and is expected to begin operations by 2019.

Construction of another container terminal, which will have a pier 350 meters in length and a depth of 14.5 meters, is already in the pipeline.

Chairman and Chief Executive Lou Kim Chhun told the Nikkei Asian Review in a recent interview that this will allow "enough big ships to come in, while solving capacity limitations." When completed as planned in 2023, the port could accommodate more than 90% of all ships in the region, up from 20% now, in terms of numbers. 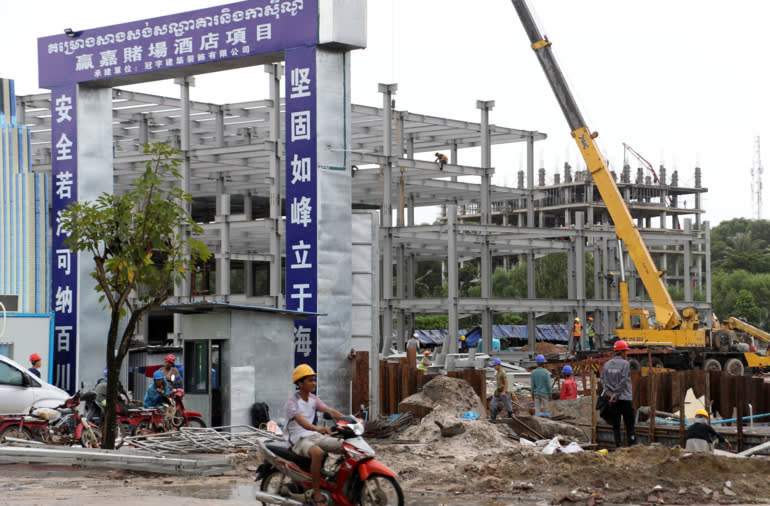 Sihanoukville is rapidly becoming a Chinese outpost with many construction projects underway.  (Photo by Akira Kodaka)

The Japanese funding for the port is provided by the two overseas aid bodies, the Japan International Cooperation Agency and the Japan Bank for International Cooperation. JBIC's forerunner provided its initial loan for the port in 1999 as an emergency rehabilitation project to help Cambodia recover from a prolonged civil war. Both JICA and JBIC have since then provided a total of 46 billion yen ($411.3 million) in loans, grants and technical assistance. 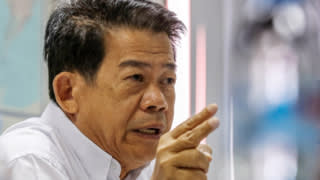 "For big projects, we borrow from JICA, and for small projects [such as adding new cranes], we invest on our own," Chhun said. The Soviet-educated engineer, who has headed port operations as chairman since 1998, does not hide his gratitude for Japan's repeated rounds of financial assistance. He said the aid has been "efficient and useful for the Cambodian people."

The port also holds special meaning for Japan since it marked the resumption of financial aid to Cambodia after three decades of hiatus. "Sihanoukville Port is a symbolic project for us," said Masayoshi Takehara, JICA's director overseeing Cambodia and Laos.

The port opened after Cambodia gained independence from France in 1953 as the country sought to gain unrestricted access to the open sea and reduce its dependence on its Mekong River port in Phnom Penh. Sihanoukville was selected because of its harbor depth and natural conditions, allowing less dredging, among other reasons. Construction began in 1956 and the first jetty opened in 1960.

Sihanoukville is now one of the fastest-growing ports in the region, boosted by Cambodia's annual economic growth rate of 7% in recent years thanks to increased garment exports to Europe and the U.S. and imports of raw materials from China. The port's strategic significance has also grown as China pursues its Belt and Road Initiative, with Beijing seeking to gain access to harbors in Eurasia, including Southeast Asia.

China overtook Japan as the biggest donor to Cambodia in 2010, and Chinese aid is now three times that of Japan. "There are limits in competing over size of aid packages," Takehara admitted. Japanese aid mostly focuses on noncapital-intensive projects, but Sihanoukville is an exception.

When the port was listed on the Cambodia Securities Exchange in June 2017, JICA bought a 13.5% stake -- the first time it had acquired equity in an assistance target. It is the second-largest shareholder after the Cambodian Ministry of Economy and Finance, which has a 75% stake. The initial public offering has also attracted another Japanese investor, Kamigumi, a major logistics service provider, which acquired 2% of outstanding shares.

Chhun said that "many Chinese guests come" to see him. Other sources said that Chinese companies have made offers to invest in the port, but so far to no avail. China is showing signs of impatience.

Zhou Xiaoxi, chairman of Guangxi Beibu Gulf International Port Group, signed an agreement in Phnom Penh on April 24 to build a new seaport in Kampot, a province adjacent to Sihanoukville. "We decided to go ahead with the project after realizing that Cambodia currently lacks much-needed investment in a deep-sea port," he said, according to a local media report.

The Chinese state-owned port operator is partnering with Try Pheap Group, led by local timber tycoon Try Pheap. Although not many details have been disclosed, the new port could accommodate large vessels up to 30,000 tons.

The signing was attended by Cambodian Deputy Prime Minister Men Sam An and the governor of the Guangxi Autonomous Region, Chen Wu. Both local and Chinese media reported that Cambodian Prime Minister Hun Sen endorsed the project during a meeting with Chen and accepted an invitation to visit Guangxi in September.

Kampot is little more than 10 km away from the Vietnamese island of Phu Quoc, which Cambodians call Koh Tral. Some irredentists want to claim sovereignty over the island, although the government has officially dropped territorial claims.

But a new port development so close to Phu Quoc by a state-owned port operator from China, which has overlapping claims with Vietnam in the South China Sea, could touch raw nerves in Hanoi.

On the northern side of Sihanoukville, Tianjin-based Union Development Group says it is building a new deep-water port. According to its website, "construction of a multipurpose harbor is basically completed, and it will come into use in the near future."

The port is part of a large-scale tourism investment, including the flagship Dara Sakor Seashore Resort project on 45,000 hectares of land in a national park in Koh Kong province. The land was leased to the Chinese company for 99 years in 2008, though details of the development are not known. A source in Koh Kong told Nikkei that the port has not yet been built. The Tianjin company did not respond to a request for an interview from Nikkei.

Sihanoukville Port management considers its biggest competition to come from the river port in Phnom Penh and the larger ports in Laem Chabang, Thailand, and Cai Mep, Vietnam. 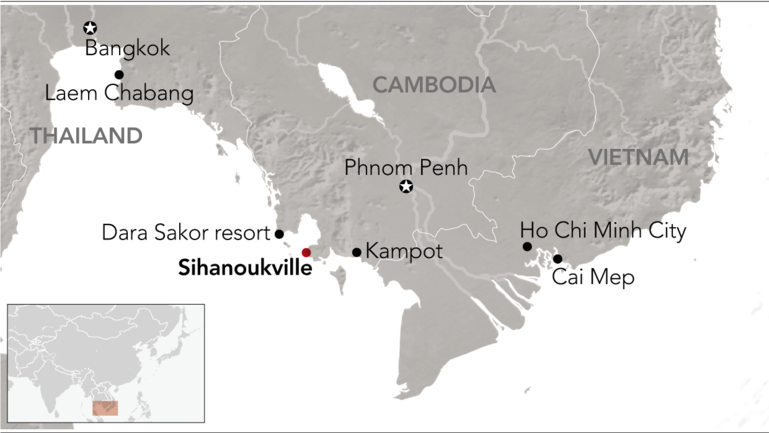 The Chinese-planned ports are not yet viewed as serious rivals since their actual progress and feasibility are not clear. But the Chinese could expedite these projects for strategic reasons to circumvent the Japan-affiliated Sihanoukville Port.

The port is also facing competition from the local Chinese rival in attracting investment to its special economic zone. It launched a special economic zone in 2012 on the advice of JICA, but it has attracted only three companies. The latest investor, approved in July, is Union Gakki, a Japanese company that rehabilitates used pianos and exports them to more than 80 countries. Although JICA has kicked off a special promotion in April, no additional companies have responded to its call. The Cambodia Securities Exchange is suffering from low participation among companies and investors. (Photo by Akira Kodaka)

In contrast, a special economic zone in Sihanoukville established in 2008 by Chinese investors, led by the Wuxi-based Hongdou Group, has 107 companies operating there with another 18 planning to join as of early July, according to the operator of the industrial zone. The companies, mainly Chinese, manufacture textile, garments, bags, leather products, machinery and wood products and employ 21,000 workers.

The Chinese special economic zone recently embarked on a plan to double its size as scheduled after strong a response and endorsements from President Xi Jinping and Premier Li Keqiang.

Sihanoukville Port also is much smaller in financial terms than potential Chinese competitors. Although it is the largest listed Cambodian company, with a market capitalization of 444.3 billion riel ($108.7 million) as of the end of July, it pales against the financial resources of Chinese port operators.

Beibu Gulf Port, the Shenzhen-listed arm of the Chinese state-owned company that is planning to build the port in Kampot, is about 15 times larger in market value. 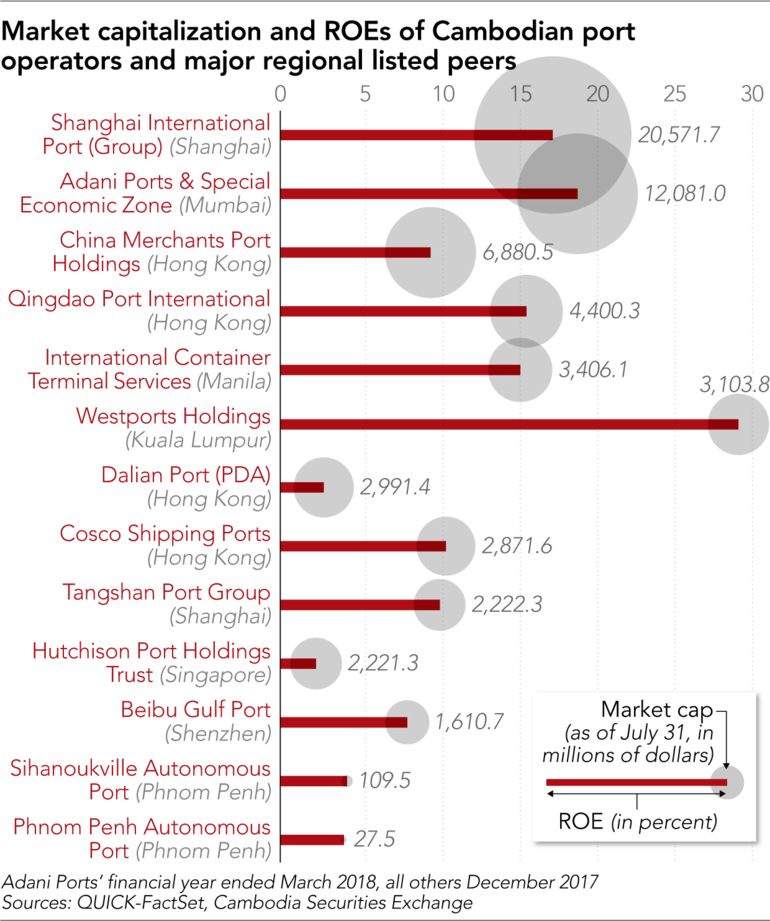 Despite its growth prospects and a guaranteed 8% annual dividend for the first three years based on its IPO price of 5,040 riel, Chhun said he is "not so happy" about the port's share price performance.

The company may be alienating investors for several reasons. Its prospectus revealed that its dominant shareholder, the Ministry of Economy and Finance, "charges a higher interest" than what its Japanese lenders provide. 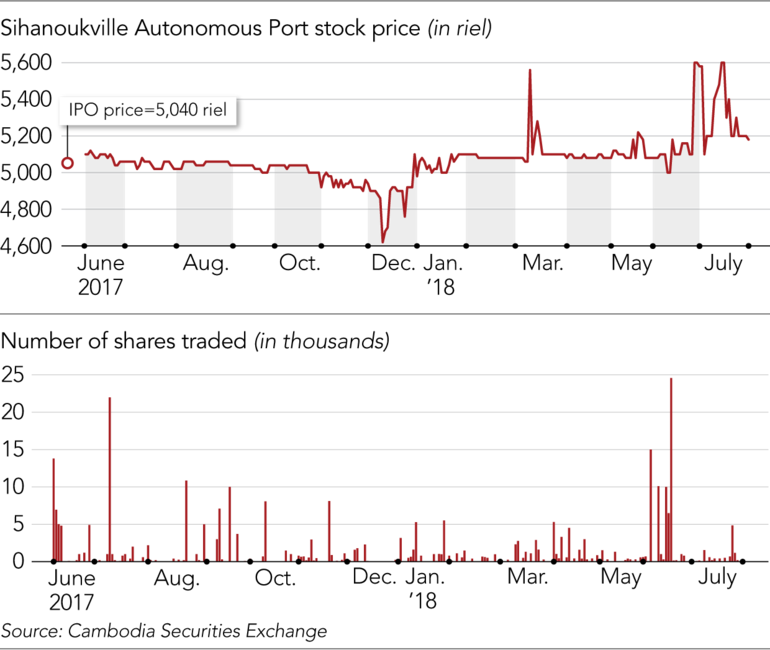 While the original rates offered by the Japanese range between 0.01% and 1% per annum, the ministry charges between 2.5% and 3.7%. The company added, "Payments of the principals and the interests may affect PAS's profitability." But JICA told Nikkei that it does not believe the interest rate difference represents a significant risk.

The Cambodian stock market also suffers from a lack of new listings, which discourages investors while keeping liquidity and trading activity low. There are only five listed companies in Cambodia, even smaller compared with seven in neighboring Laos, which opened just a year earlier, in 2011.

On top of a basic lack of understanding on securities trading, Takashi Kihara, an economics professor at Dokkyo University who recently co-authored a research report on ASEAN's capital markets, said that "indirect financing could still sufficiently cover corporate funding needs at this point in Cambodia, while the high level of dollarization has an impact on development of the local bourse." More than 90% of bank deposits in Cambodia are in U.S. dollars, which means the riel-based stock market is not attractive to investors. Sihanoukville Port in the future could face financial challenges in raising funds from the Cambodian exchange.

The port operator's outlook rests on the volume of future cargo shipments. On top of possible collateral damage from an escalating global trade war, the Cambodian port could see export shipments to the country's two major overseas markets decline if the U.S. and the European Union decide to review their preferential tariff arrangements with Cambodia as a result of the July 29 general election, which has been described by both Washington and Brussels as unfair and flawed.

When asked about these politically related risks to the port prior to the election, Chhun, who won a parliamentary seat in the Sihanoukville constituency running on the ruling Cambodian People's Party ticket by a landslide victory, said: "It is out of my capacity." 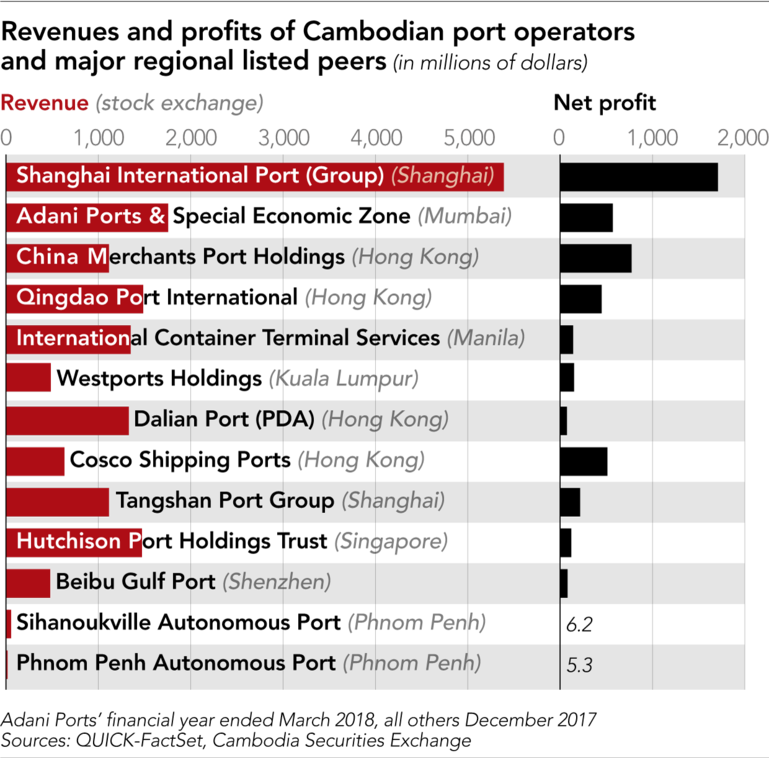