Ctrip's nerve center at its Shanghai headquarters gathers data from 300 million users to make suggestions tailored to their preferences. (Photo by Sanmiao Photo)
Company in focus

China's Ctrip faces turbulence in journey to the top

SHANGHAI/TOKYO -- The data center inside the Shanghai headquarters of Ctrip.com International, China's biggest online travel agency, looks like a war room. Huge screens with maps of the globe stretch across the walls, logging in real time the travel plans of some 300 million users.

"We gather travel habits from past behavior to make an algorithm for the best personalized suggestion," said Jane Sun, the chief executive officer of Ctrip, in an interview with the Nikkei Asian Review. "Even if the user decided not to make a booking, the keywords they search are still important as they show that person's intention."

Ctrip, which brings flights, hotels and over 60 services and experiences onto a single online booking platform, has become a giant in Chinese travel since its creation 20 years ago. It has seen off foreign competitors such as Expedia, which has struggled to enter the market through acquisitions. And by snapping up domestic competitors, Ctrip now controls about 60% of China's online travel bookings in terms of value.

In 2017 its revenues reached 26.8 billion yuan ($3.9 billion), up 39% on the previous year. Its growth rate far exceeded that of global competitors Expedia at 15% and Booking Holdings' 18%, while its debt to equity ratio floats around 33%, much healthier than its global competitors' more than 60%.

Founded in 1999 by former Oracle software engineer and current Chairman James Liang and three friends, the company has benefited from China's heady economic growth over the last two decades and the rise of a middle class hungry for new experiences. 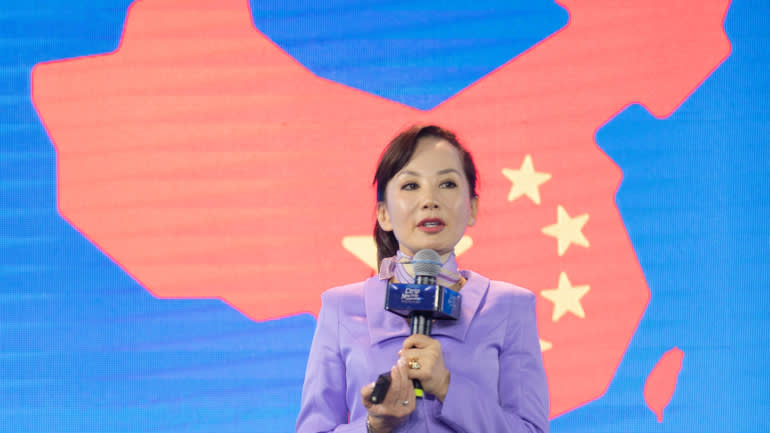 But now China's economy is slowing and its consumers are increasingly cautious. At the same time, online competition is growing rapidly as ambitious tech giants such as Tencent Holdings and Alibaba Group Holding look to the travel market for new business opportunities.

In November 2018, Ctrip shocked the market by scaling back profit expectations for the final quarter of the year and warning of new challenges for 2019.

Amid that uncertainty, Ctrip last month brought together more than 2,000 of its suppliers and business partners to set out its growth strategy. It was the first time the company had hosted such an event and Liang himself addressed the audience of hotel and flight suppliers, government tourism bodies and search engines -- including its top shareholder since 2015, Baidu -- perhaps hoping to reinforce ties in a vast network of products and services that Ctrip's new competitors have not yet achieved.

"Travel is a lifelong journey. It boosts economic growth and gives meaning to people's lives," he told the audience packed into the five-star Shangri-La hotel in Shanghai. "We are building the world's best travel platform to achieve synergies with various industries."

When Liang founded Ctrip, it was barely three years after the launch of Microsoft's Expedia but already the potential for the internet to disrupt the travel industry was obvious -- even in China.

Spotting the opportunity, Liang and his friends, including Neil Shen who now manages the China operation of VC fund Sequoia Capital, launched Ctrip as a travel review site. They gradually used their expertise in travel, finance and technology to move on to hotel bookings and then flights. Ctrip became one of the first Chinese tech companies to go public in the U.S. when it listed on the Nasdaq in 2003. The Ctrip app, shown on a tablet, offers flights, hotels and experiences in one place. (Photo by Ken Kobayashi)

The company's initial success was founded on standardized customer service, uncommon in China's travel industry at that time. Thousands of phone operators were trained to provide a uniform service, "a massive manpower-based operation," according to a person familiar with the company.

Today, however, Ctrip is focused on exploiting the data of its 300 million customers, using algorithms and artificial intelligence, to offer personalized services. The company employs more than 6,000 engineers to adapt and improve the system continuously, using 50 terabytes of data every day.

"I have not found anything like Ctrip," said Lu Jingwu, 25, an office worker in Shanghai. The app automatically shows him hotel rooms or an airport car service once he books a flight in business class. "The suggestion the app gives me is usually very well matched to what I want," he added.

The secret is back in the Network Operation Centre, with those data-filled screens.

"We examine this data to develop new products, incorporating popular cities in our packaged tours for example," said Jessica Wang, an engineer at the NOC. She changed the screen to show two lines: one for real-time booking transactions and the other for bookings as predicted by the company's algorithm. Engineers are alerted when the two lines differ substantially, "so that we can detect any technological issues for booking," said Wang.

China's travel industry has come to rely heavily on the company. "Ctrip has tremendous recognition among Chinese tourists," said an executive of a travel agency that has used Ctrip for three years. "Ctrip provides suppliers with a smooth process, from booking, payment to marketing thanks to its use of data," said a director of a resort hotel in Thailand's Phuket. The resort sees annual growth of 20-30% in Chinese guests, he said.

Liang reiterated the benefits of working with Ctrip. "Every industry related to tourism should be our partners because we can provide them with various services," he said.

Despite his confidence, pressures are mounting. In its November warning, the group revealed that it expected its underlying operating profit margin to fall from the 20% achieved in the three months ended September to between break-even and 1%. The group also admitted there would be "some short-term uncertainty on the macro next year."

Analysts were forced to fundamentally rethink Ctrip's profit-making potential. "We do not believe the consensus' 20% operating margin is achievable in 2019," said John Choi, analyst at Daiwa Capital Markets, who has downgraded Ctrip from Buy to Underperform. Kenneth Fong from Credit Suisse also downgraded the company from Outperform to Neutral, citing "rising challenges" of near-term macro headwinds and medium-term margin uncertainties. 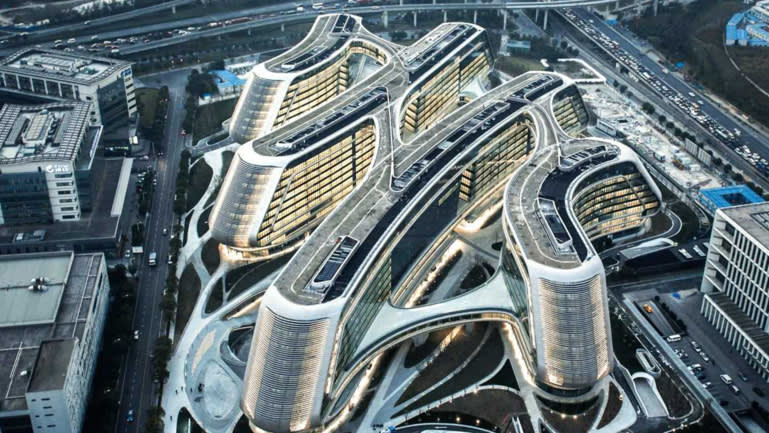 Ctrip, which operates out of this building, was surpassed by online platform rival Meituan Dianping in terms of rooms nights in the second quarter of 2018. (Photo by Sanmiao Photo)

After the biggest one-day drop in Ctrip's 15-year history on the Nasdaq, in the wake of the profit warning, the shares are now trading roughly 40% lower than a year ago.

Amid the uncertainty of China's slowing economy, Ctrip is seeking to reduce its reliance on its home market, where domestic travel still contributes nearly 70% of group revenue. In 2016, the group acquired Scotland-based Skyscanner for about $1.7 billion, one of its largest investments. Ctrip also bought Trip.com in 2017, a Silicon Valley-based travel recommendation service, to use as the global brand targeting non-Chinese consumers.

The international expansion poses risks, though. Ctrip began targeting Japanese customers in 2017 but has been accused of failing to vet vendors sufficiently. Some so-called business partners had been selling rooms in hotels where there were no vacancies, hoping for cancellations, but leaving customers stranded when the bookings had to be canceled.

"Ctrip has been expanding its sales in Japan since last year but they should be aware of the loss of trust among Japanese consumers and hotel operators," said Hisanori Nagayama, vice chairman of the Japan Ryokan & Hotel Association.

Sun vowed to guarantee "the authenticity of listings on our site." But, like Nagayama, many in the industry now question the sustainability of Ctrip's overseas ambitions, given the difficulty of ensuring quality with myriad partners. "It is unbelievable that Ctrip's partners were not even connected to sales software of [hotel room] suppliers and were selling nonexistent products," said Ken Mishima, the former general manager of Expedia North Asia and currently the head of e-commerce strategy at Japanese travel agency JTB. "Ctrip is certainly one of the travel giants but needs to provide services that fit global standards if they want to expand their reach to global consumers."

Meanwhile, slowing consumption is not Ctrip's only domestic challenge.

Recent research revealed that Meituan Dianping, a Tencent-backed online platform for food deliveries to ticketing and hotel bookings, had garnered a 46.2% share of total room nights in the second quarter of 2018, far exceeding Ctrip's 22.9%, or the total 44.5% it could claim by combining affiliates Qunar and Tongcheng-Elong. The research was carried out by Trustdata, a mobile internet big data monitoring company in China.

Tencent, which runs the WeChat messaging app, is also an investor along with Ctrip in Tongcheng-Elong, which listed in Hong Kong in November. While the two companies are partners -- Ctrip shares hotel inventories with Tencent and advertises on WeChat -- analysts see potential for competition. 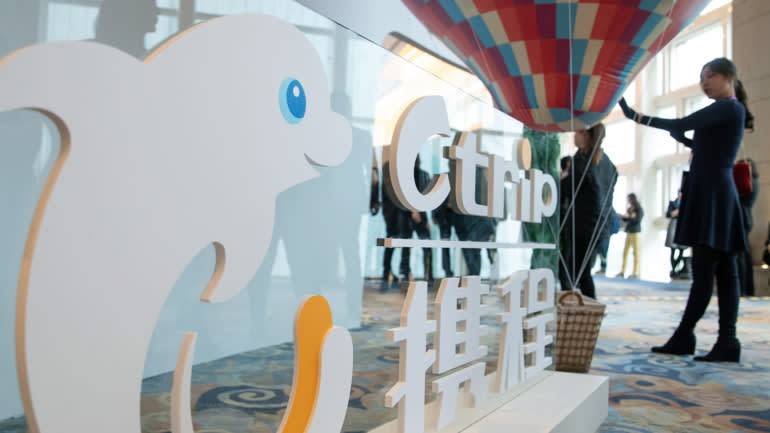 Ctrip draws confidence from the fact that despite the slowing economy, Chinese still traveled more in the first half of 2018. (Photo by Sanmiao Photo)

"The ability to gather consumers' data is much stronger in daily-use apps like WeChat or Meituan than apps solely focused on the travel sector, which have much lower frequency of use," said Kenichi Shibata, chief operating officer of Venture Republic, a Japan-based operator of online travel media.

"Ctrip would surely be negatively affected if Tencent became a direct competitor, reducing its touch-points with consumers," he added.

Sun, when asked about the potential threat from industry disrupters, remained unruffled.

"Their strength is at the front-end, customer user interface," said Sun. "But once customers find a hotel, you need to make a reservation with the help of an online travel agency with a wide range of suppliers."

Ctrip's confidence is also rooted in data showing that Chinese consumers still want to travel even in tougher times. They made 5.54 billion domestic trips and 148 million overseas journeys in 2018, up 11% and 13.5% from the previous year, respectively, according to China's Ministry of Culture and Tourism. "China's macroeconomics will affect us a little bit but travel is much more resilient than other industries," Liang said. "It usually grows twice the GDP growth rate." He estimates China's domestic travel market is still growing "close to 10%," while international travel will slow from about 15% to 10%.

As Liang and his team look to take on the likes of Booking or Expedia, the next phase will be expansion in Hong Kong, South Korea and Japan -- and possibly beyond.

Succeeding as a travel agency in today's connected world is about much more than booking flights or hotel rooms, Sun insists. It is "a high-barrier industry which requires thousands of employees and engineers. That is not easy and our one-stop platform is not something you can build tomorrow."